The Best Movie Posters of 2011

I had a thought yesterday, and for me, now, having a thought is like being drunk with friends – whenever you think of anything out loud, no matter how stupid, crazy or hypothetical it was, the immediate response is, “DO IT!”

“I kind of want to pee off this balcony right now.” “DO IT!” “Wouldn’t it be awesome if I chugged the rest of that bottle?” “DO IT!”

This “DO IT!” had to do with my thought of how there were so few good film posters out nowadays. What ever happened to the art of poster creation?

Remember all those classic posters from years gone by? Gone With the Wind, Jaws, Scarface, Vertigo, Full Metal Jacket, Ghostbusters – there are hundreds of them.

Nowadays, it’s all cut, copy, paste, photoshop. Every poster is designed to remind you of something else that made money, or of a famous poster from a while back. There are sites all over the internet (which I won’t link to, but all you need to do is search and you’ll find a bunch of them) that show you how derivative most of these posters are. It’s terrible.

So, in order to promote the good, here are my favorite movie posters from 2011:

I kept my list free of those posters featuring images of the films (I was also careful to avoid that up top as well), just because, while those are also iconic, I really respect a poster design that, in a single image, conveys everything you need to know about a film. To me, there’s more talent to that than just putting an image from the film on there. Sure, if the image is iconic (like in The Exorcist or Forrest Gump posters, then yes, that makes it a great poster. But for purity’s sake, here, I didn’t include those. (Don’t worry, it really only means one alternate version of a poster didn’t get on. It wasn’t going to anyway.) I’m also limiting this to only 2011 films (so awesome posters for 2012 films that are already out, like Haywire or The Dark Knight Rises will be on next year’s list. Because you know I’m gonna do it again next year. Who doesn’t like looking at great movie posters?).

First, two honorable mentions: The Mechanic and Winnie the Pooh. The former just because I like how they set it up, even though I’m not really sure what it has to do with anything, and the latter just because it’s really simply and pure and sells everything about what that movie is about — simplicity and gorgeous animation. I honestly would have put it on if I didn’t like #s 14 and 15 more.

So here are my favorite movie posters of 2011.

I’m going to count down, just because it’s fun to make it feel like it’s building to something. And also, maybe then you’ll see my decision-making process (though probably not).

What this also means is that my 11-15 list will come first. So, we’ll actually be counting down from 15. Not that you really care, do you? 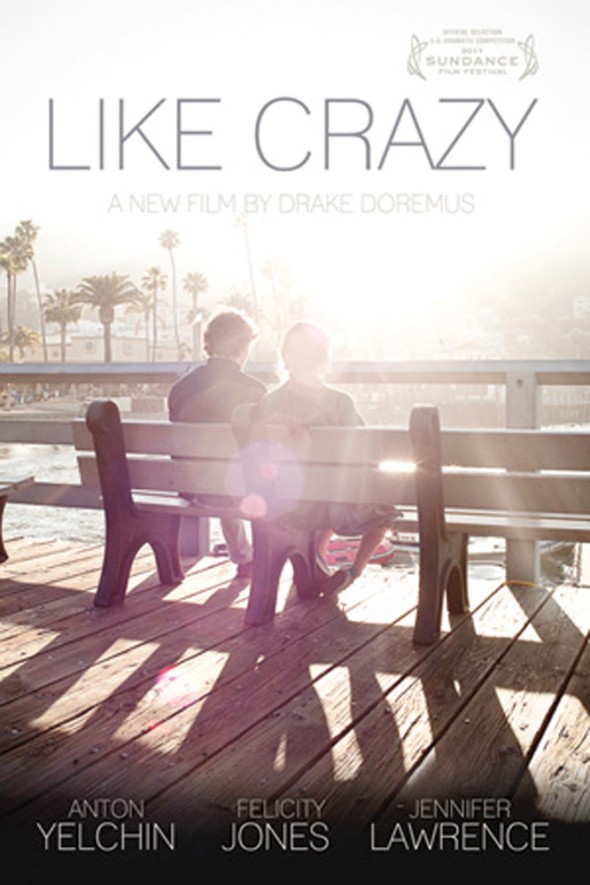 I really like this poster design. I don’t think it’s getting enough attention. Do you really need to know anything about this film in order to understand exactly what that poster signifies? Plus, the building design — I love that kind of architecture. When they do that. Kind of like at the “Rhapsody in Blue” segment of Fantasia 2000. Or like, in the background of old movies, those matte paintings. Or shit — even the Miramax logo! I love that skyline stuff. I think this is a really well-made poster. 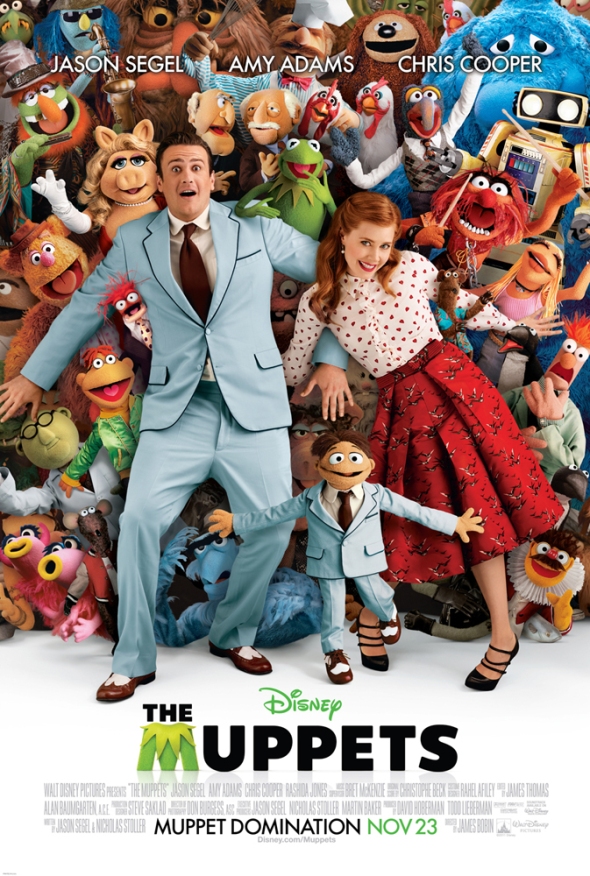 Because it radiates pure, unadulterated joy. I didn’t even like The Muppets as a kid. This poster still made me really excited to see this movie (so did that first trailer. “Green with Envy” — love that. That’s probably the best trailer of the year for me. Though, I don’t know — I don’t remember watching a lot of trailers. The only ones that really stuck out to me (because I’m not making that list too) were that, Dragon Tattoo (with “Immigrant Song” and The Artist. I honestly can’t even remember anything else off the top of my head). I think it’s fantastic. Colors. Colors everywhere. 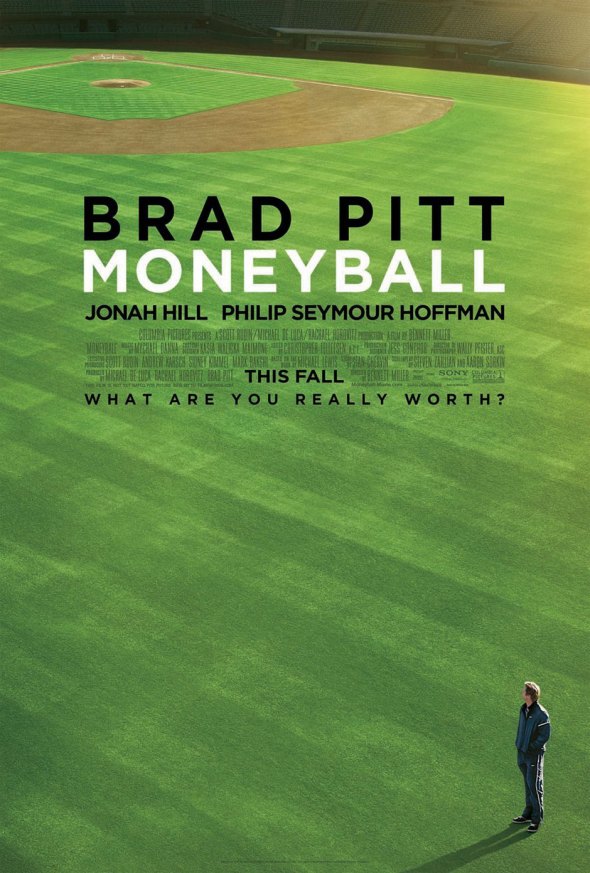 Maybe it’s all the green — I like it a lot. To me it’s just a really strong poster. It makes me want to see the movie. I can’t really explain my love of this poster — I just do. 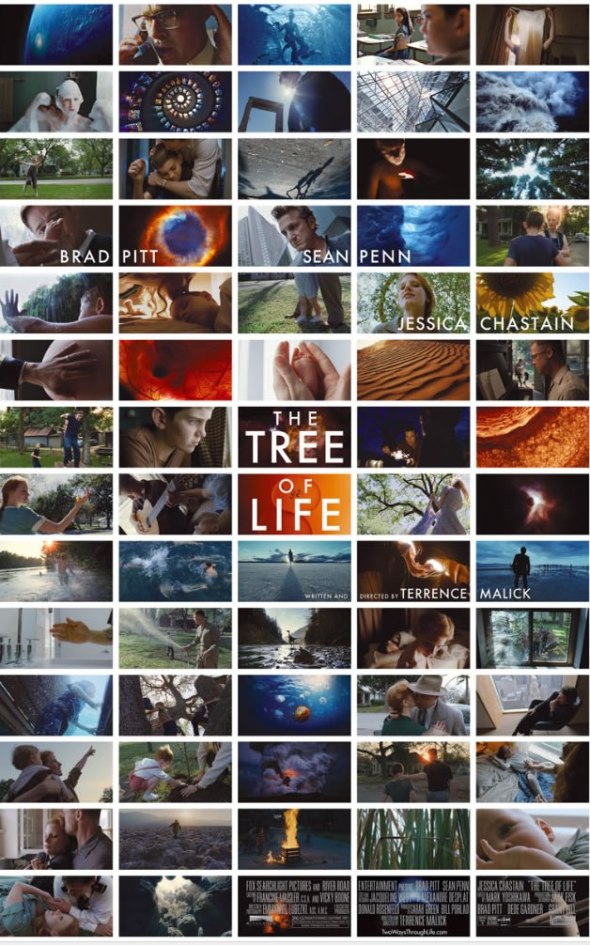 With all due respect to this poster, and this one (that’s the one that was disqualified for containing an image from the film), this version of the Tree of Life poster really stuck out to me simply because I love the idea of this type of collage. I remember applying to a college (that actually became the school I almost went to) because their brochure had a collage just like this with all the majors and choices you could make on it. I still have that somewhere. I love this type of poster, and if you do this, I will almost always give it a mention. (Pay heed, folks. I’m telling you how to aesthetically please me.)

Okay, now for the “official” ten.

This is probably the one film on this list that I didn’t love so much (maybe Iron Lady too), but — you go retro with a poster (looking at you, Haywire) — I’m there. How can you not find this aesthetically pleasing? This is terrific. There’s not really a secret to coming up with a good poster. It’s really all about giving a shit. (Also, if you’re gonna borrow a design — how about not stealing from a superhero movie or something and steal from Saul Bass? Do you really think people won’t go to see your film because the poster is too obscure? (Don’t answer that. I know you do.)) This poster is great.

It’s the mosaic aspect of it that I love. Love that. Quite a simple design, actually. Yet — effective. This is all you need.

Simplicity rules. What more do you need to know after a poster like this? This is everything in one image. Just try getting more simple than this. (On the first go. Not after it’s been out.)

7. The Girl with the Dragon Tattoo

The reason this is so high is because of what this poster does. It punches you in the face. And that’s what this movie aims to do. It confronts you directly — look, here are tits. Do something. I respect that. (Fincher did the same thing with his opening credits. That’s a real punch to the face.)

With all due respect to the final version of the poster for this film — this is better. The other one is nice, but it doesn’t have the visual and thematic impact this poster has. Having read the books (which I assume we all have. Otherwise — when the hell did you grow up?), is there any other image that perfectly captures exactly what this film is about more than this? You can’t do it any better than this.

Oh, what, you thought this wasn’t going to be here? Of course it is. This is perfect. Simple, retro — another poster that evokes a mood. It perfectly situates you into what this film is all about (and calls back so many classic posters, which only adds to it). Simple and effective, people.

Not gonna lie — this poster is what got me to watch the film. I heard a film called Another Earth was getting great reviews, and then thought, “Oh great, another District 9” or something — one of those sci-fi action movies (or even a found footage film like Cloverfield) that everyone goes ape shit about that makes me unable to stand them (I literally did not watch District 9 (past the first “fuck you” watch) until the day before the Oscar ceremony. It took me that long to come around on that movie (and even then, enough to nod my head and go along just so people will shut the fuck up about it)). So I was all ready to ignore this. But then I saw this poster, and went, “You know, maybe I will check it out after all.” This poster is simple, effective, and contains a powerful image. The power of the image alone was enough to put it here. 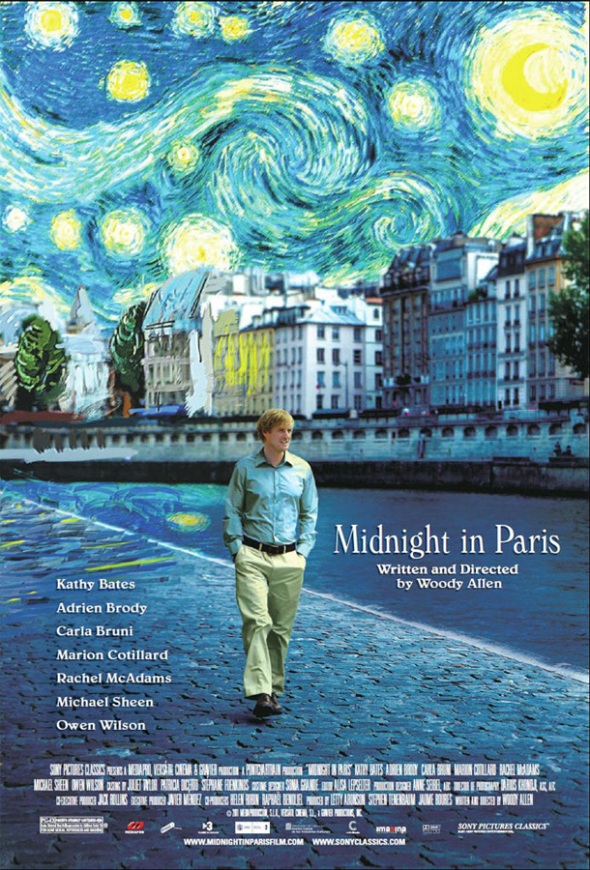 Hate to say it — this is a great poster. Aesthetically pleasing, strong image (in its way), and thematically relevant. It’s pretty much the total package, as film posters go. 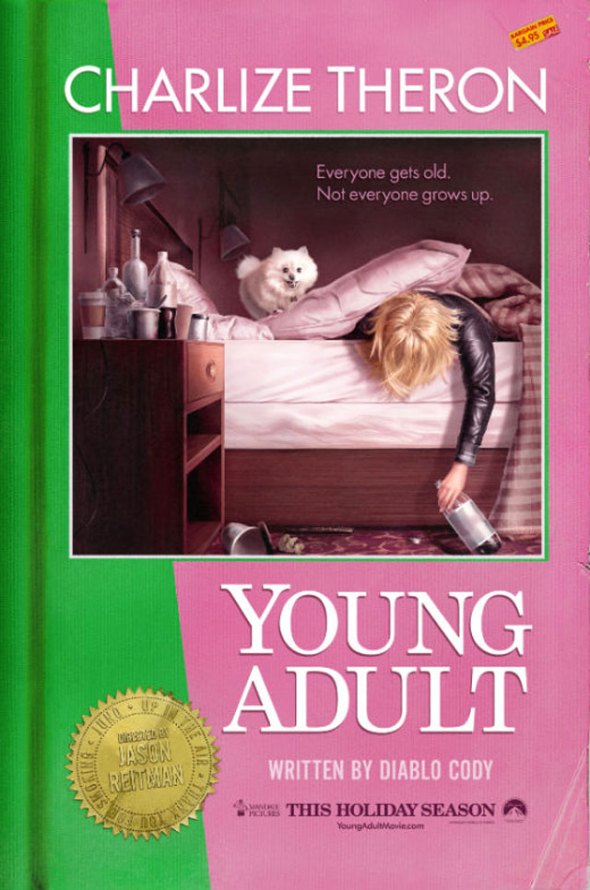 Talk about absolutely nailing a theme. Is there any list of best movie posters of 2011 this isn’t on? (Or at least half of my list, for that matter?) I know Jason Reitman loves his posters, which really makes him (along with his track record) a filmmaker after my own heart. His Up in the Air poster was by far the best of 2009. It wasn’t even close. Which comes back to my point of — if you put any effort into the poster, it’ll probably look good. Because look at this — it doesn’t really take much thought to come up with this concept. And yet — that’s what makes it so brilliant. Those five minutes of thought translate to a poster that will be remembered, instead of one that won’t. I know the industry doesn’t care, but — a poster goes a long way. Notice how really none of these movies is shitty? But anyway, this poster — they even got the sticker right! How can this not go here?!

1. The Ides of March 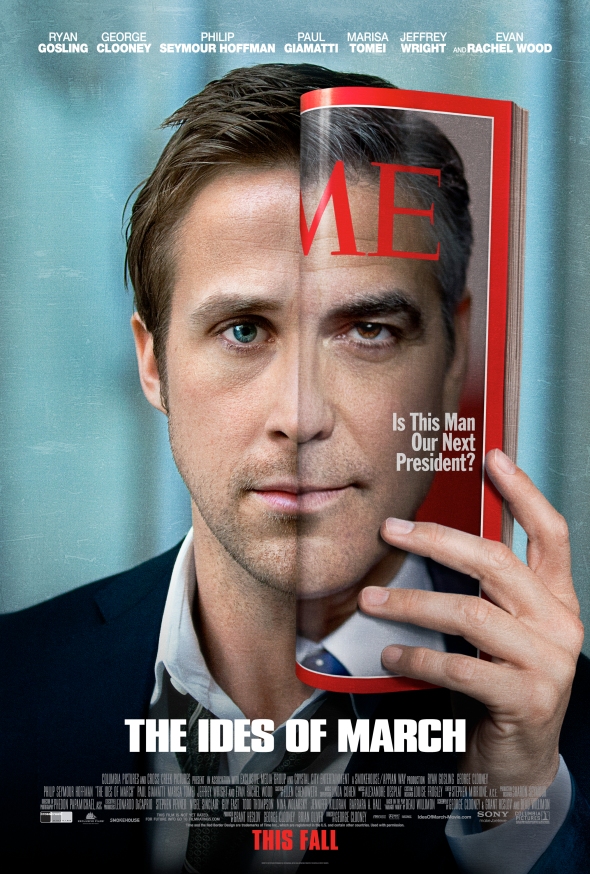 There was no way this wasn’t going #1. When this poster came out, I immediately said, “This is going to become one of the most famous posters of all time.” Look at it. You can’t explain it. It’s just a wonderful, brilliant image, and one that also happens to wonderfully explain the theme of the film. It’s perfect in every way, and I’m telling you — in ten years, this will be a poster (and a film) that people still talk about.