My Favorite Moments in the 2011 Best Picture nominees: Moneyball

Our seventh Best Picture nominee is Moneyball. Here’s a film that not many people thought would be quite as good as it was. I think we all knew the talent involved would make it a good picture, but I don’t think we ever thought we’d get this. This is a top five or ten movie of the year. It took a subject most people wouldn’t think could be adapted for the screen and made a compelling sports movie out of it. And, it stayed almost completely off of the field! That’s a testament to the strength of this film.

Here are my favorite moments from Moneyball:

I almost put the scouts meeting here, the one where Billy tells them he wants players who get on base while they continue to espouse the philosophy of trying to replace irreplaceable players, but this shot is much more thematically relevant, and is actually a great quiet moment in the film. Much of the film cuts back and forth between the story and the backstory of how Billy got here. And this is the moment where he realizes he was never cut out to be a professional ballplayer and decides to quit and become a scout. It’s a powerful moment. A lot is accomplished by Pitt in this film via body language and facial expressions. I felt that was more important to show than just talking about a particular scene, since I’ll be doing plenty of that with the next four entries.

It was a toss-up between this or Jonah Hill’s analogy about the dude who tripped trying to run from first to second and didn’t realize he hit the ball sixty feet over the fence. But I went with this because — this is a wonderfully constructed sequence. The editing here is just, phenomenal. As is the sound design. The sound design in this film is incredible. This sequence manages to get you totally immersed into the game on a dime. Sports have this inherent quality to make you totally invested really quickly. And this film uses that to show you simple glimpses of the game, cutting back and forth between the story, clips from the game, and recreations (which we see in the screenshot up there). I love how they constructed it. And I love how it’s a fleeting climax for the film. You have this high point, but nothing comes of it. That’s strong storytelling. 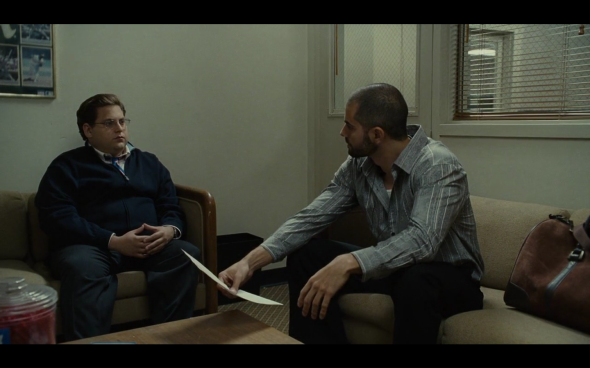 I loved this scene. It’s a big “fuck you” to everyone. You don’t want to play my guys? I’ll make you play them. I love that.

This is another great scene. It directly relates to the previous one, too. It’s the happier version of that one. I just love how, in the span of about eight minutes, they go from deciding, “Let’s get Rincon,” to getting Rincon. I also like how these deals are made. All perception and phone calls. It’s terrific. This feels like a Sorkin scene.

This was such a great moment. Another one that feels like a Sorkin scene. You can tell that Billy’s starting to realize he has to go out on the high wire without a net, and then the scout comes in and basically tells him he’s gonna fail, and that’s what gives him the confidence to go through with it. And it’s all framed around the punchline of Kevin Youkilis. Peter tells him Boston picked him up and are adapting a “wait and see” policy, and it seems like Billy’s not really listening, and then he comes back at the end, after the entire conversation with Grady the scout, and is like, “So they’re gonna wait and see?” Terrific scene.