Disney does Holmes. That’s what this is. Why as a mouse — I don’t really know. But you know — it works. Though this is 1986 — there’s a far superior mouse film somewhere out there from 1986. Just sayin’.

But anyway — it’s Holmes, and Holmes is always interesting, no matter the iteration. Disney does a good job with it. It’s a solid film. I don’t really have anything bad to say about it. But, on the other hand, I don’t really have anything glowing to say about it, either. It’s a solid film, and for me, it’s in that middle area between Disney’s best stuff and Disney’s worst stuff. Just a solid Disney movie. Good parts, bad parts, but overall, it works. (Though no songs. Come on, Disney. Get back with the program, he said, knowing what would happen in 1989.)

The film begins in Flaversham’s Toy Shop, where a young mouse named Olivia is having a birthday party with her father, Hiram. (Note: They’re Jewish.) Out of nowhere, a bat with a peg leg comes and kidnaps the father. Then bam – credits.

Dr. David Dawson arrives in London, looking for a place to stay. This is Watson, in case you couldn’t figure it out. He runs into Olivia, who is trying to find Basil of Baker Street (guess who he is), to try to find her father. 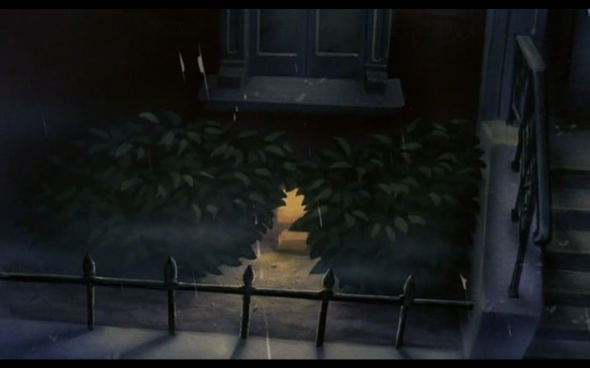 They find Basil living below 221B Baker Street (at 221 ½), and wait for him to return. He very quickly shows his superior aptitude for detecting things, as well as his complete oddity of behavior. He doesn’t care much for Olivia’s plight until he hears about the bat with the peg leg, whom he reveals works for Professor Ratigan (aka Moriarty).

Meanwhile, Ratigan has kidnapped Flaversham in order to force him to create a robot version of the Queen that he’ll use to take over the government. He sings about how he’s the “world’s greatest criminal mind.” 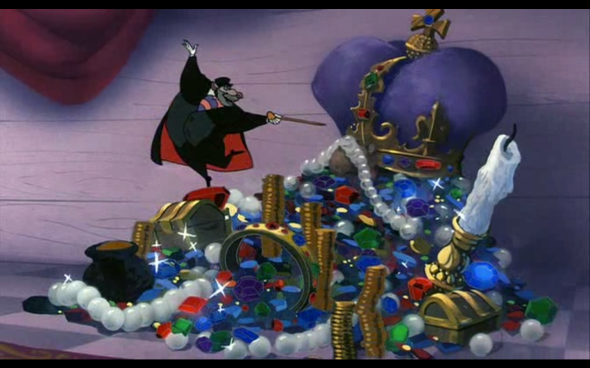 He sends Fidget, the bat with the crippled leg, to kidnap Olivia, which sends Holmes out on the case to follow him. They get Toby, Holmes’ basset hound, Toby, to follow Fidget’s scent. They follow it to a toyshop, where Fidget is stealing supplies so Flaversham can build the robot.

As they inspect the toyshop, Fidget kidnaps Olivia and takes her to Ratigan. Ratigan uses her as leverage to make Flaversham finish the robot that night, and locks her in a bottle (how does she not suficate?). Fidget tells him that Basil is on the case, and Ratigan plans to kill him.

Basil, using the piece of paper Fidget had with the list on it (which he dropped during his escape), surmises that Ratigan’s hideout is on the riverfront. So he brings Dawson to a seedy bar in the area where the river meets the sewer. 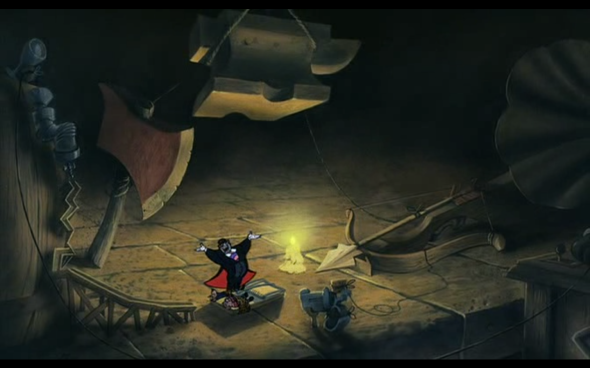 They get to the bar and see Fidget, and follow him into the sewers as he returns to Ratigan’s lair. They get there and find the bottle Ratigan trapped Olivia in, only to discover that the whole thing is a trap and that Ratigan was expecting them. He puts them into an elaborate Rube Goldberg trap, and, assuming it’s foolproof (as all villains do), explains the entire thing to them. He then leaves, assuming they’ll be killed.

Naturally, they escape. While they escape, Ratigan goes through with his government takeover. Only, Basil and Dawson arrive just as they’re about to kill the real Queen. Basil then commandeers the robot Queen and reveals the plan to everyone. Ratigan and Fidget escape with Olivia in his dirigible. Basil, Dawson and Flaversham give chase, using a makeshift dirigible of balloons.

Ratigan tosses Fidget overboard (evil people always get rid of their henchmen) before crashing into Big Ben (just as Basil gets on board the craft). He and Basil have a showdown inside the gears of Big Ben, and then on the clock face itself. Ratigan and Basil both seemingly end up falling to their deaths (the Reichenbach Fall), but Basil naturally survives. 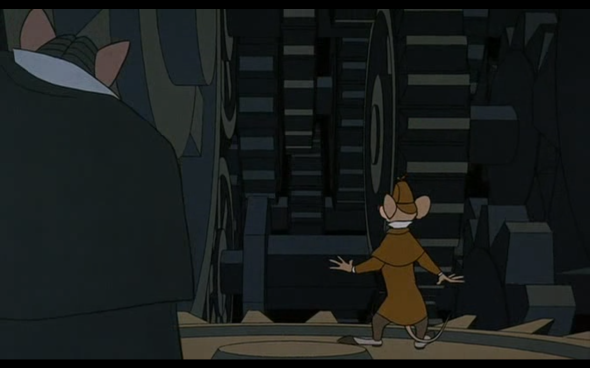 We end with Olivia being reunited with her father, and Basil taking Dawson on as an assistant for his next case.

It’s a good film. Very entertaining, very well-done all around. I’m not a huge fan of the whole grand scheme, but whatever. Basil is so well done it doesn’t even matter. It’s a really strong film. I don’t love it love it, but I do like it a lot. It’s one of those — I should like it more than I do, but every time I tried to rank it, all these other films just kept going ahead of it. I don’t know. But who cares about the ranking? It’s a great film.

1. They use this shot a bunch. The best example is in One Hundred and One Dalmatians. 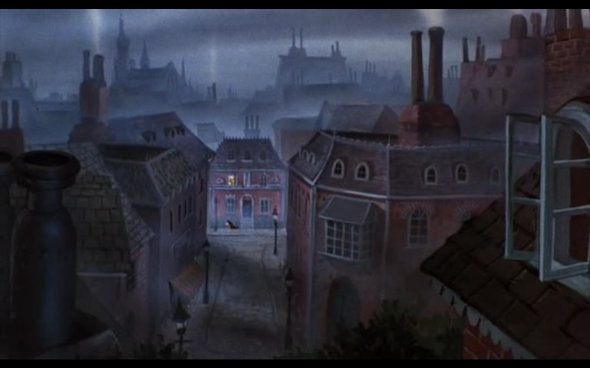 2. Big Ben — just like Peter Pan. That’s really all I got. It’s not really a connection, but I’ll take it.

3. Love this shot. I guess it’s a love of Safety Last and Back to the Future. Love me some clock faces. Plus the idea of this angle, looking down. Great shot. 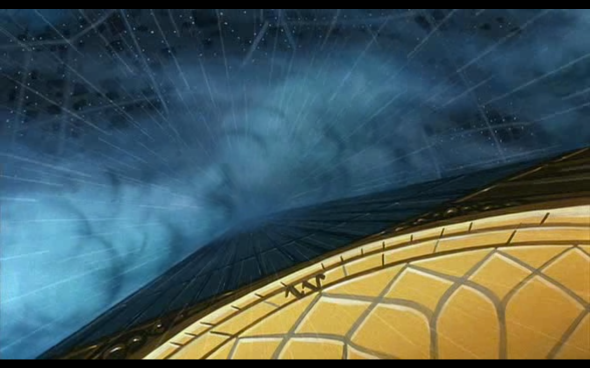 5. Disney likes using silhouettes of people fighting while someone hidden watches it. The best example of this is in Lady and the Tramp, when Lady watches Tramp fight the other dogs in the alley. 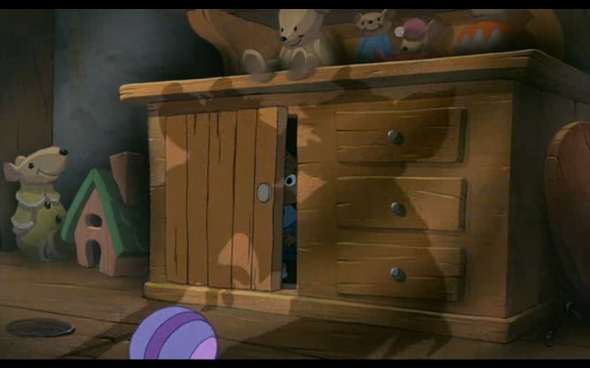 This entry was posted on August 11, 2012 by B+ Movie Blog. It was filed under Movies and was tagged with Disney, Film, Movies, Ranking Disney, The Great Mouse Detective.