I have an interesting history with this film. I’d never seen it until junior year of college, when some friends decided they really wanted to watch it. So, I sat with them, in my room, on Halloween night, 2008, watching this (before I went out and got shitfaced, but you know).

I remember watching it and thinking that it was okay, but was definitely not the classic Disney I remembered from when I was a kid. And in the three years between that night and when I saw it for these articles, my opinion of it went down considerably. I just didn’t remember it as a good film, and I was perfectly ready to put this very low on this list. Very low. I think I originally shortlisted it high-30s, and then at one point it was as low as like, 41. But the time came for me to actually watch it and find a specific place for it, and, I have to say — I was very surprised at how good this actually is.

I’m not sure why I didn’t think this was very good, but, after watching it again, I realize that my idea of the Disney Renaissance ending in 1995 wasn’t the case at all. (It ended in 2000.) This is a very solid film all-around, the the worst thing I can say about it is — why the hell isn’t it on Blu-ray yet?

We pan down from the Notre Dame cathedral to Clopin, a puppeteer, narrating the story of “the mysterious bell ringer.” 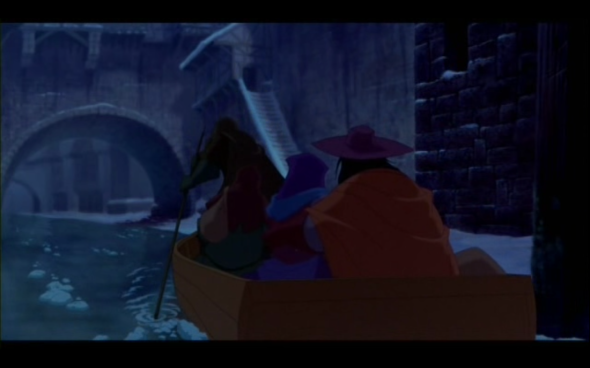 We flash back to a bunch of gypsies trying to sneak into Paris and being caught by Judge Frollo. One of the gypsies makes a run for it, and Frollo chases her to the cathedral. She ends up hitting her head on the steps and dying and Frollo realizes she was carrying an infant child (one that is hideously deformed at that). He considers throwing the child down a well, but the cathedral’s archdeacon tells him he cannot hide his actions from God. Frollo then agrees to raise the child as his own but tells the archdeacon to keep him in the church, locked up in the bell tower where no one can see him.

We then cut to twenty years later, as Quasiomodo is still locked up in the bell tower. His only friends are stone gargoyles that are magically living somehow. It is the day of the Festival of Fools, and Quasimodo so desperately wants to be down there but doesn’t want to upset Frollo, who has forbidden him to leave, telling him the world is cruel and will reject him (basically making Quasimodo dependent on him).

Meanwhile, down on the streets, Phoebus, new captain of Frollo’s guard, sees and falls in love with a gypsy, Esmerelda. He is then given orders by Frollo to capture the gypsies, whom Frollo considers bad influences on the pious citizens of Paris. He thinks the gypsies have a safe haven inside the walls of Paris, called the Court of Miracles. He wants Phoebus to find the court and destroy the gypsies.

Quasimodo then sneaks down from the tower to attend the festival. In disguise, naturally. He watches Esmerelda dance, and falls in love with her, just as Phoebus has.

He is then crowned the King of Fools, since the idea of the Festival of Fools is that everything is topsy-turvy. So the ugliest person is crowned King. Everyone recognizes him as the bell ringer and celebrates his crowning.

Only Frollo’s men act like assholes and throw tomatoes at Quasimodo. And then the crowd joins in, leading to that famous moment of Quasimodo tied by ropes, trying to become free.

Frollo allows it to happen, wanting Quasimodo to learn that he shouldn’t have left. Esmerelda, meanwhile, climbs atop the platform and comforts Quasimodo. Frollo tells her not to free Quasimodo, but she does anyway. He orders her arrest, and she escapes into the church, where she cannot be arrested. She even manages to get the best of Phoebus (temporarily), which only makes him even more attracted to her. Frollo posts guards outside every door of the church, saying that if she steps one foot outside, she’ll be arrested. Inside, she meets Quasimodo, who came back into the cathedral, humiliated. 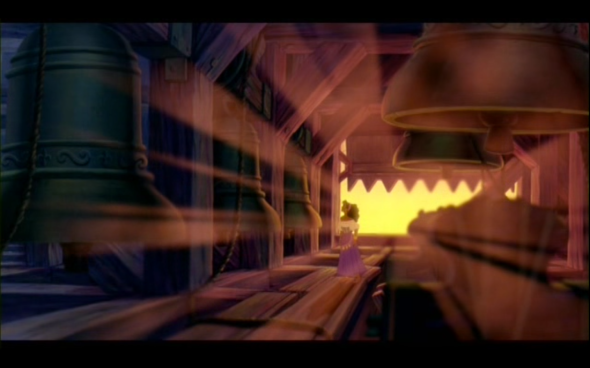 She sees all the things he does up in the bell tower and sees his humanity. She can’t understand how someone like Frollo managed to raise someone like Quasimodo.

Meanwhile Frollo sings a creepy song about how he’s attracted to Esmerelda, and begs the Virgin Mary to get rid of his feelings of wanting to get his dick wet. I’m paraphrasing, of course. (But seriously…)

He then sends the guards to tear apart the city looking for Esmerelda, even going so far as to personally set a house on fire that contains a family who has harbored gypsies.

Phoebus, who had refused to set the house on fire, is sentenced to death for insubordination by Frollo, but Esmerelda frees him. Though he ends up being stabbed by an arrow.

Frollo, meanwhile, has the guards pretty much set Paris on fire looking for Esmerelda. He also figures out that Quasimodo is the one who helped her escape. He arrives and tells Quasimodo (who is secretly hiding a wounded Phoebus) that he knows where the Court of Miracles is and is going to burn it down, hoping it will get Quasimodo to rush to tell her and lead him right to it.

Quasimodo and Phoebus set out to do just that – warn Esmerelda and the gypsies and inadvertently leading Frollo and his men right to them. Frollo prepares to burn Esmerelda alive, Joan of Arc style, right in front of the cathedral. Quasimodo (who was chained up and forced to watch), breaks free and rescues her. He brings her up to the church and claims sanctuary.

But Frollo don’t care. Frollo don’t play that shit no mo. He orders his men to storm the church. But Phoebus breaks free and gets the people to riot. They fuck up Frollo’s guards something real good. 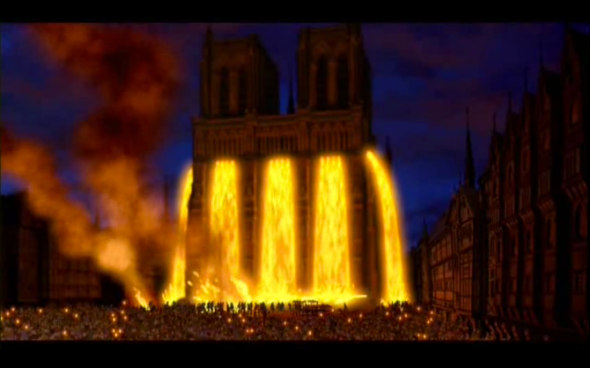 Then Frollo climbs to the top of the cathedral (naturally) to find Quasimodo crying over Esmerelda’s presumably dead body. He tries to stab Quasi, and we find out Esmerelda’s still alive, so Quasi takes her and rushes to get her away from Frollo, which leads to the two of them hanging perilously over the side of the cathedral with Frollo swinging a giant fucking sword at them.

Naturally this ends with Frollo falling to his death, because it’s a Disney movie. That’s how the male villain goes.

Then it ends with Quasi realizing Esmerelda loves Phoebus, and them getting together, and then he getting him to come out of the cathedral, whereupon he is warmly greeted by society. A marked difference from the novel.

I really fucking liked this movie the second time. I think it was because the subject matter wasn’t particularly interesting to me when I thought about it. But honestly, this is a great movie. The songs aren’t Alan Menken classics, but they work well, and the movie is dark. I like that it’s dark. I really like that it’s dark. There’s not enough proper darkness in Disney. Not Black Cauldron dark, I mean this dark. This is proper dark. It raises solid issues, doesn’t have stupid comic relief, doesn’t waste any part of the story — I’m a big fan of this. (Though I’m not gonna pretend like I wouldn’t choose a lot of other films above this. Though, this was like 12 spots below this in the original list draft. So as far as I’m concerned, this is a terrific placement for it. That’s what counts here, not the actual number.) 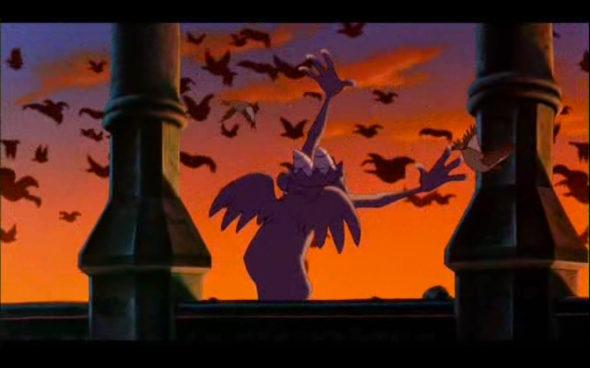 2. Either it’s reminiscent of other castle scenes, like Sleeping Beauty, or I just really like it. Either way — there you go.

3. Character reflection in the water.

5. How many shots have you seen this shot in Disney? A character walking up a spiral stone staircase? 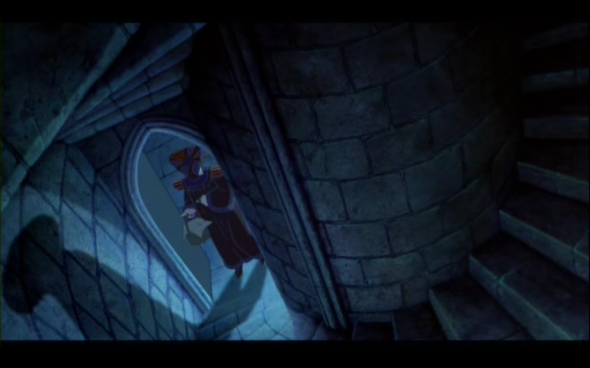 7. Character on a horse going over a bridge. Classic Disney.

8. Basically the “Whole New World” sequence in this film. 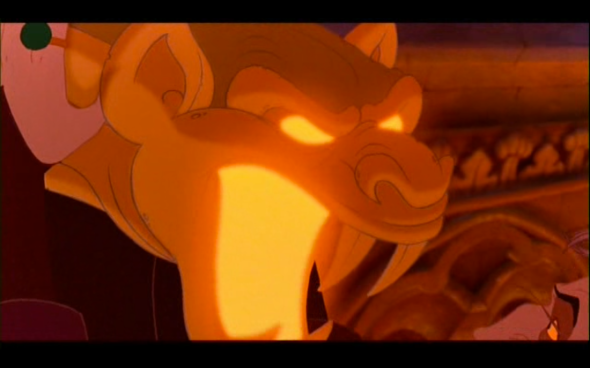 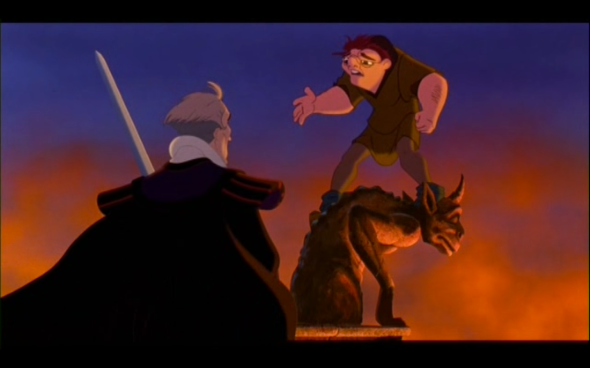 This entry was posted on August 16, 2012 by B+ Movie Blog. It was filed under Movies and was tagged with Disney, Film, Movies, Ranking Disney, The Hunchback of Notre Dame.