I don’t think there’s any Disney film that’s as innocent and pure as a Winnie the Pooh film. Nothing. There’s not a single scary image in the film, and you can be a year old and enjoy it. You can’t really say that about any other Disney movie.

They’re also movies where absolutely nothing needs to happen and they’ll still be great. This is the kind of movie where you might think it’s not worth being this high, but when you watch it — it’s just incredible. I seriously like this more than most Disney movies. I can’t explain it. It just brings out the five-year old in me. And with movies, that’s never a bad thing. 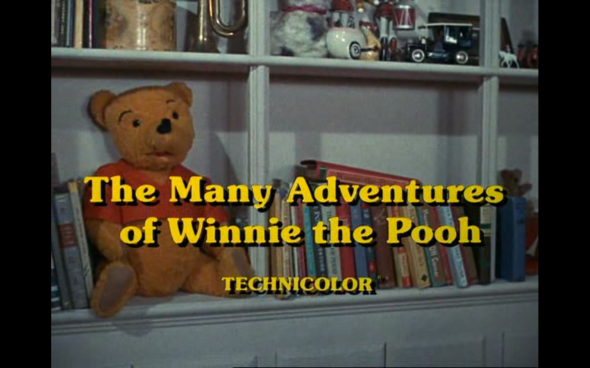 The film starts with a storybook prologue and “Winnie the Pooh,” introducing us to Christopher Robin and his friends – a donkey named Eeyore, then Kanga and little Roo, and Rabbit, and Piglet, and Owl – but most of all Winnie the Pooh.

This first section is “Winnie the Pooh and the Honey Tree.” We meet with Pooh as he does his exercises and looks around for some honey to eat. He climbs a tree, but then falls when the branch breaks. We then go to Christopher Robin, who reattaches Eeyore’s tail. Pooh then comes over and asks for a balloon that he can use to float up to a tree to get the honey. Pooh then rolls around in the mud and pretends to be a rain cloud to fool the bees, but it doesn’t work and he ends up being swarmed. (Also — blackface Pooh.) 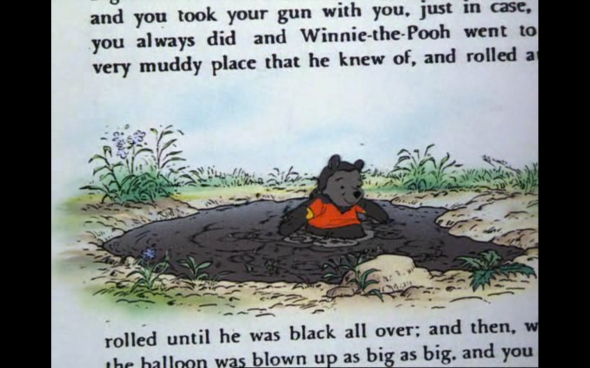 He then escapes and goes to Rabbit’s house. Rabbit offers him some honey, and he ends up eating about a dozen jars’ worth. But as he leaves, he gets stuck in the door to Rabbit’s house. Owl happens by and goes and gets Gopher to help dig out the hole so Pooh can exit. But Gopher ends up being no help (because he’s not in the book). Christopher Robin arrives and decides they must wait for Pooh to get thin again.

Rabbit decides he’s going to make Pooh part of the house, and decorates around his backside. Then a couple days pass, and one night, Gopher arrives, working the late shift, just about to eat his lunch. Coincidentally, he has honey with him. He offers some to Pooh, but Rabbit runs outside and says Pooh can’t have any because it’ll only keep him stuck in there longer.

And one day, Pooh budges, and they decide he can soon get out of there. And everyone ends up marching and singing about it. Which is pretty weird, out of context. And they all yank him out of there, and he goes flying and ends up in a tree with some bees. Fortunately, it’s filled with honey and he scares all the bees away. So he gets all the honey for himself.

Then we go to the next story, which is “Winnie the Pooh and the Blustery Day.” This one actually is the one that was used (most) to make that great short, “Apocalypse Pooh.” (Which you can see here. It’s great.)

Anyway – it’s windy. Pooh calls it “Windsday.” He goes to wish Piglet a happy Windsday. But Piglet ends up almost flying away because of the wind. They end up in Owl’s house, in a tree, which rocks back and forth in the wind. Owl offers Pooh some honey, but the pot keeps sliding away from him as the house tilts back and forth. Eventually the whole tree tips over. 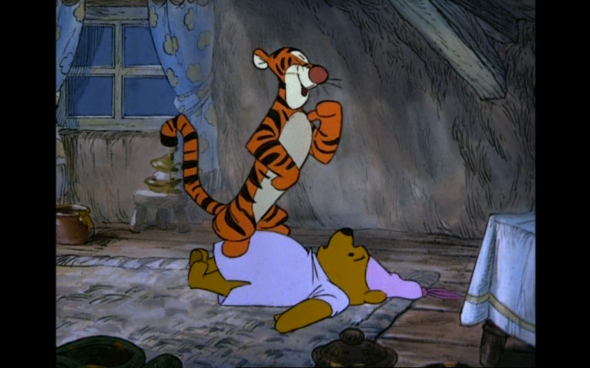 Later that night, Pooh starts hearing strange noises. Which end up being Tigger. He sings about himself and then talks about Heffalumps and Woozles, which steal honey, before rushing out. This scares the hell out of Pooh, who patrols his house with a pop gun in order to protect his honey. He soon falls asleep and has a nightmare about Heffalumps and Woozles. It’s very much in the vein of “Pink Elephants on Parade.” In fact, there are elephants in the dream.

I’ll put more screenshots of it down at the bottom. It’s very “Pink Elephants on Parade.”

And when he wakes up, his house is full of water and it’s pouring outside. And then the rain, rain, rain comes down, down, down. The Hundred Acre Wood floods. Piglet sends out a note for help in a bottle, and Owl flies over to check on him. As he goes, he spots Piglet, floating on a chair, and Pooh, upside down in a honey pot. They approach a waterfall and fall down it, and wind up on dry land.

Christopher Robin says that Pooh saved Piglet, and throws a “Hero Party” for him. But just as they’re about to celebrate, Eeyore comes and says he found a new house for Owl. But we find out it’s actually Piglet’s house. But Piglet, being magnanimous, lets Owl take the house. Pooh, meanwhile, lets Piglet live with him. And then they throw a “Two Hero Party” for the pair.

The final story is “Winnie the Pooh and Tigger Too.” Tigger bounces around to all the characters. First Pooh, then Piglet. Then Rabbit. And Rabbit holds a meeting about Tigger bouncing too much, and decides to “lose” Tigger for the night, so as to teach him a lesson.

They go out and do this, only they end up getting lost on the way back. And he and Piglet wait in sandpit for Rabbit to return. They’re found by Tigger, who goes off to find Rabbit, who starts going crazy while lost in the forest. Tigger finds Rabbit, and they go back home. 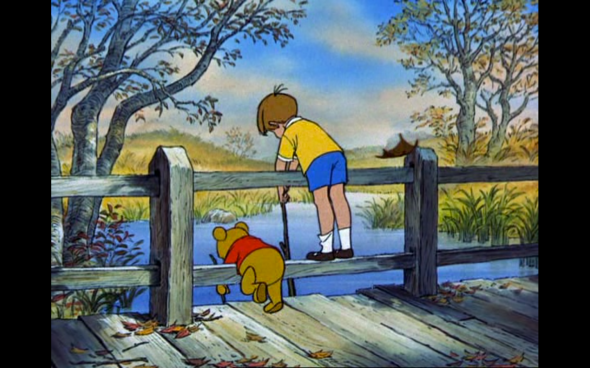 Then, winter comes, and all the characters enjoy the snow. Tigger goes out to bounce around in the snow with Roo, but ends up getting stuck up in a tree. He gets afraid of the heights, and stays up there. Pooh and Piglet find them, and eventually Christopher Robin arrives and they help get the two down. And he ends up learning the lesson that Rabbit wanted to teach him all along. Rabbit makes him promise never to bounce again, which makes him sad. But then Rabbit gives in and says he likes the old Tigger better. And he and Rabbit bounce away. 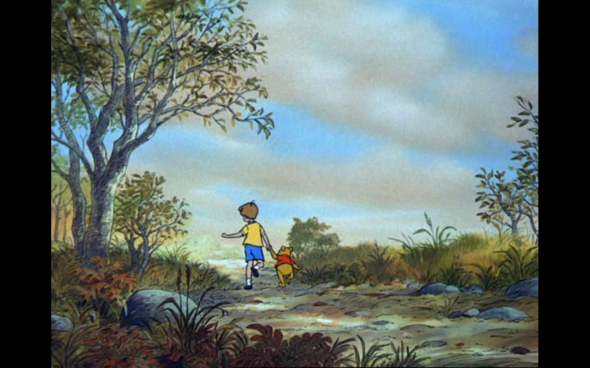 Then Christopher Robin says goodbye, as the book ends. 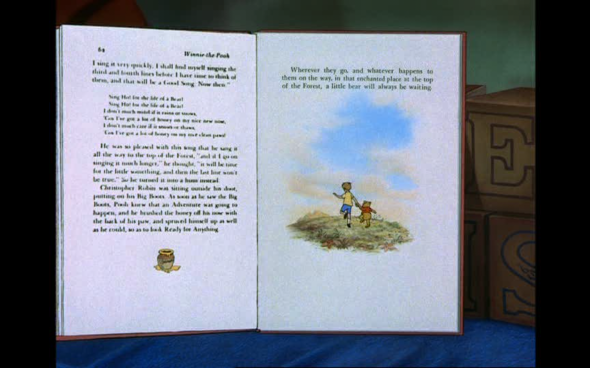 What can you say about this film? It’s amazing. Also, just so we’re clear — two reasons this doesn’t go higher than the newer Pooh film, it’s made of of previously-released material, and because the newer one is so gorgeously animated. But still — these movies are perfect.

Not much trivia for this one. But really why does there need to be? It’s simple, and it’s perfect.

1. Storybook opening. How many do you think open like this? At least 15, right?

2. I’m sure Disney’s done stuff like this before (it’s not totally the same as characters in the leafs and stuff, but it’s sort of similar), but really I just like the image of characters floating in an upside-down umbrella like a boat.

3. Just wanted to post a few visual book gags. That’s what makes these movies so great. I love when they do these gags. 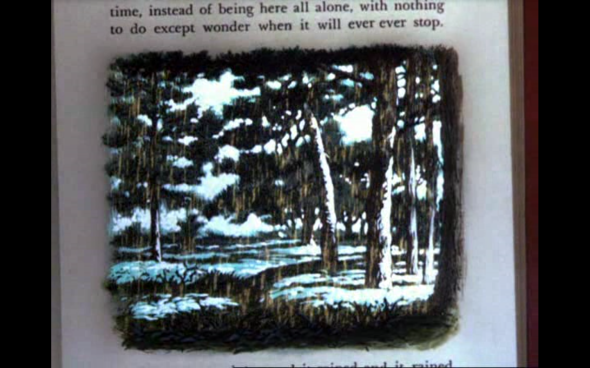 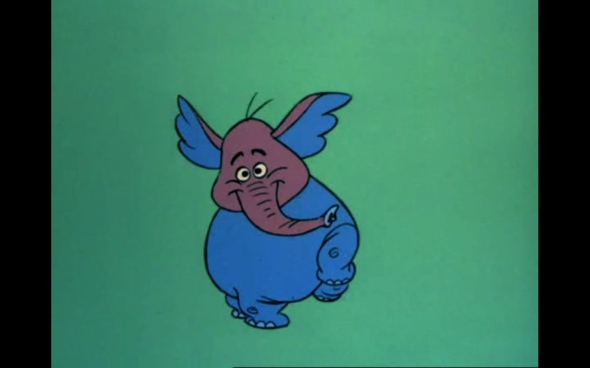 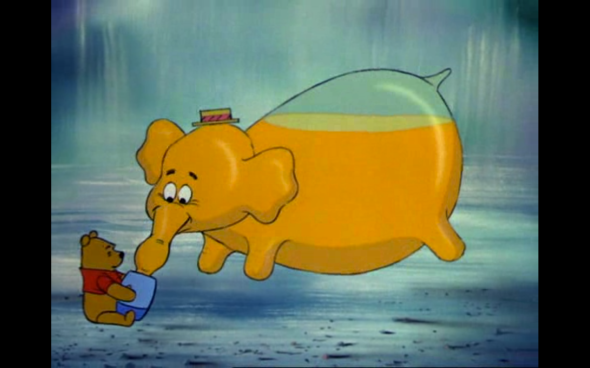 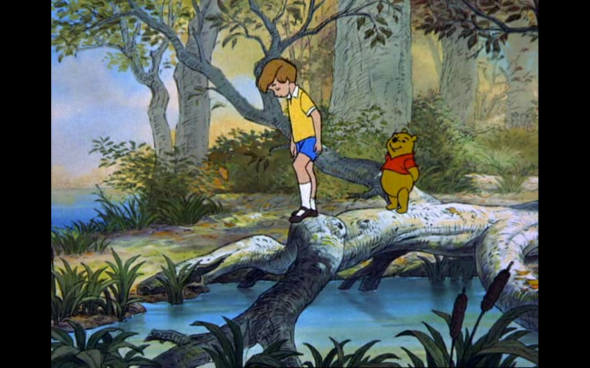 8. What would a Pooh movie be without this image?

This entry was posted on August 19, 2012 by B+ Movie Blog. It was filed under Movies and was tagged with Disney, Film, Movies, Ranking Disney, The Many Adventures of Winnie the Pooh.