I don’t know why this film is being ranked as highly as it is — I can’t explain it. It’s full of all the Disney things they do nowadays that I hate. And yet — this film is a huge guilty pleasure for me.

I really love this film, and I couldn’t tell you why. Honestly, this film would be better served about eight spots below this, but — I really like it. I don’t know. I really don’t know. But it’s so much fun. 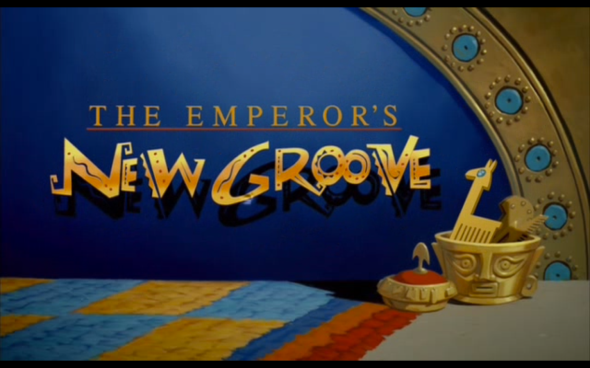 The film begins with a title:

“Long ago, somewhere deep in the jungle…”

And opens on a sad llama. And the voiceover:

“Will you take a look at that – pretty pathetic, huh? Well, you’ll never believe this, but that llama you’re looking at was once a human being. And not just any human being – that guy was an emperor. A rich, powerful ball of charisma. Oh yeah. This is his story. Well – actually my story. That’s right. I’m that llama. The name is Kuzco. Emperor Kuzco. I was the world’s nicest guy and they ruined my life for no reason. Oh, is that hard to believe? Look, I tell you what, you go back a ways, you know, before I was a llama, and this will all make sense.“

And then we get a great opening intro to Kuzco’s life, sung by Tom Jones, aka the Panty Destroyer. 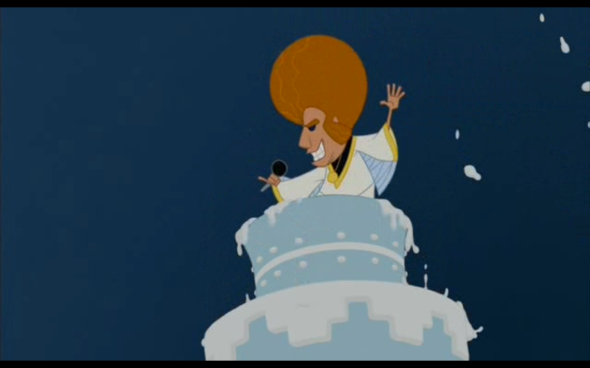 Anyway, Kuzco is a spoiled little fuck. We see him living a life of decadence, turning down every potential bride-to-be, and generally just being a dick. 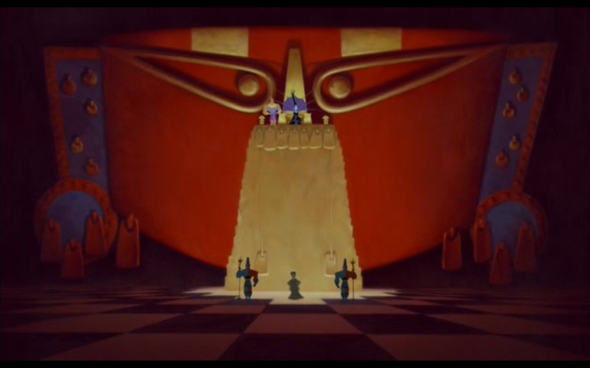 We meet Yzma, his advisor, who is trying to find a way to take over the kingdom, her right-hand man Kronk, and Pacha, a kind, unassuming peasant. Kuzco narrates, so we basically get introductions to them all.

Kuzco fires Yzma, for a variety of reasons — she’s trying to do his job, she’s old, she looks weird, she has something in her teeth — all of which would be litigable in a democracy, and then meets Pacha, and tells him he’s planning on building a giant vacation house on top of his village. 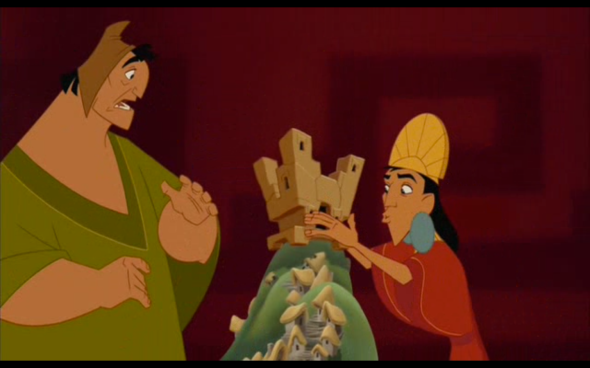 Meanwhile Yzma plans to get rid of Kuzco. She creates a potion to kill him. There’s a comic dinner scene where they slip him the poison. Only the poison doesn’t kill him — it turns him into a llama. 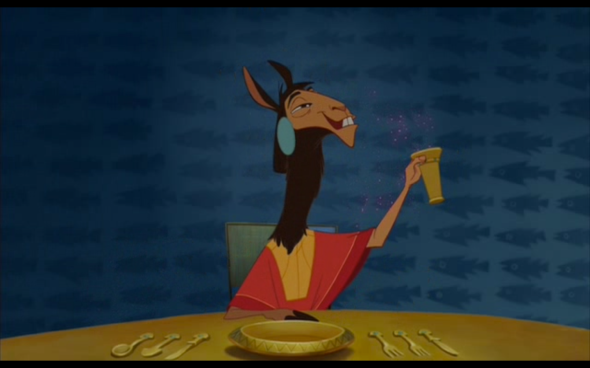 Yzma orders Kronk to get rid of the body, and there’s a comic scene where Kronk sings his own theme song as he goes to dump Kuzco’s body down the waterfall.

Only, he has a crisis of conscience, and can’t leave Kuzco to die. He tries to find another way to dispose of the body, and it ends up falling onto Pacha’s cart as he goes home.

Pacha gets home and can’t bear to tell his wife and children the truth, so he says he never got to see Kuzco. Then later, he finds Kuzco as a llama in his cart, and Kuzco, naive as ever, doesn’t realize Yzma’s the one who turned him into a llama and figures she’ll change him back because he orders her to. He tells Pacha to bring him back to his palace, but Pacha finally stands up to him and tells him he’ll take him back if he builds his summer home elsewhere. Kuzco says he doesn’t make deals with peasants and goes off by himself. 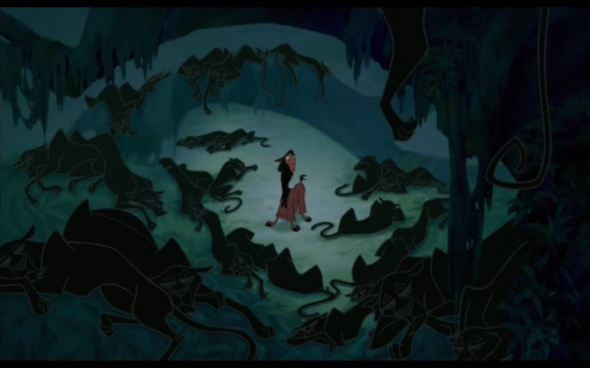 Pacha tries to warn him that it’s dangerous if he doesn’t know the way, but Kuzco goes anyway. Pacha figures — hey, he dies, that takes care of my problem — but then his good instincts take over and he goes after him anyway, because it’s the decent thing to do.

Pretty quickly after he leaves, Kuzco runs into a panther den. And what I like about this, even though it makes absolutely no sense, is that the whole time, you’re aware that he’s doing this to himself. He left because he didn’t want to “make deals with peasants,” even though he didn’t know the way, he finds a nice squirrel who wants to share food with him, and throws it back in his face (literally) for no reason. And then he lands in the panther den and the squirrel says, “Well all right, fuck you, then,” blows up a balloon, makes a llama out of it, and then pops it to wake up the panthers. None of this makes any sense, and yet — completely character driven. This scene in a nutshell is why I like this movie. Stuff shouldn’t work, and does. 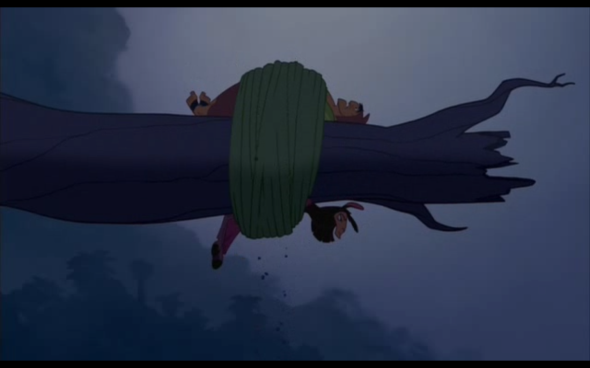 Pacha then comes to rescue him, and it doesn’t go precisely well (which I also like), and then they end up tied to two sides of a log (which is actually a great visual analogy), and go down a waterfall. And they end up camped for the night (another great visual moment is Pacha trying to light a fire and Kuzco putting it out by the things he does multiple times. I love how it all works with character). What’s amazing about this whole situation is how Kuzco never seems to realize how selfish he is. Never. Not even in the face of true kindness by the person he’s most inconveniencing. He does seem to have a brief moment of realization during the night when he’s freezing and Pacha puts his shawl over him to keep him warm.

We return to the palace, where Yzma has taken over. Kronk admits that Kuzco isn’t dead, and Yzma takes him out to find Kuzco and kill him. 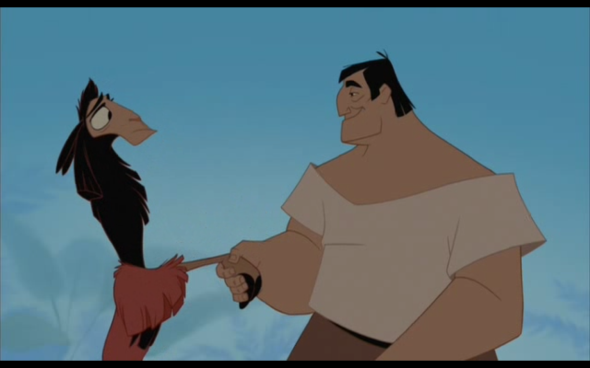 Meanwhile, in the morning, Kuzco tells Pacha that he’ll build his summer home elsewhere. Pacha is leery, since Kuzco never seems to want to do something nice for someone other than himself, so he makes him shake on it. Although, afterwards, it’s pretty clear that Kuzco has no intention of ever following through on this promise. 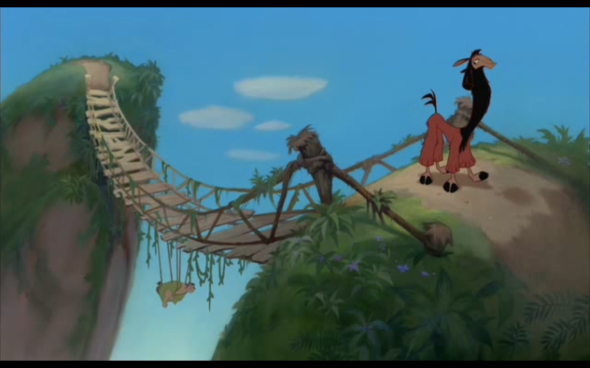 As they get “an hour from the palace,” on this wooden foot bridge, Pacha falls through and is dangling. Kuzco reveals he had no intention of following through on his promise and goes to leave Pacha, but naturally falls through. Karma is a bitch. 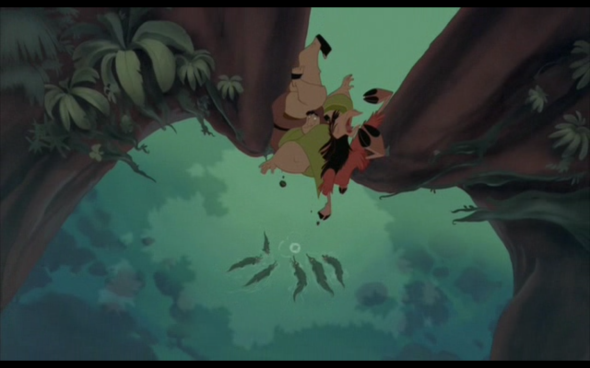 They go to a restaurant for food, and, coincidentally, Yzma and Kronk are there too. There’s a great screwball sequence with Kuzco and Yzma not seeing one another. 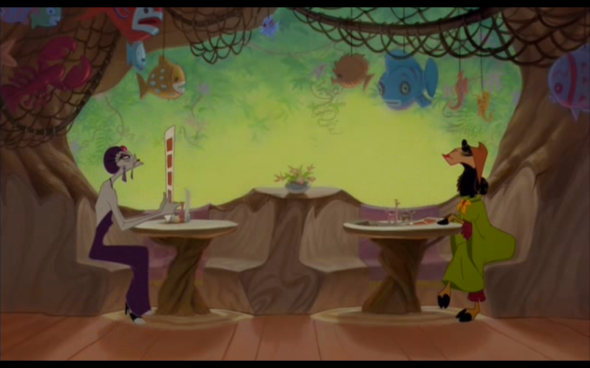 Then Pacha sneaks Kuzco out and tells him the situation, and he thinks that Yzma and Kronk will take him back to the palace, not realizing they’re there to kill him (or tried to kill him in the first place). But then he overhears them saying it, and goes off, sad. And this returns us to the sad llama part from the beginning. There’s a great moment of Kuzco interacting with himself as voiceover. I love when movies do that.

The next morning, Kuzco goes to join the rest of the llamas in the wild, but they shun him, and he’s sad. But then Pacha comes back, saying he couldn’t abandon him. They go back to Pacha’s house for supplies, and Yzma and Kronk are there. So they elude them again and make off for the palace.

Anyway — they get back to the palace and search Yzma’s lab. Yzma arrives and takes the last vial of potion to turn Kuzco back into a human. And a comic chase occurs and all that, and the human potion ends up mixed among all the others, so they end up having to try them all. 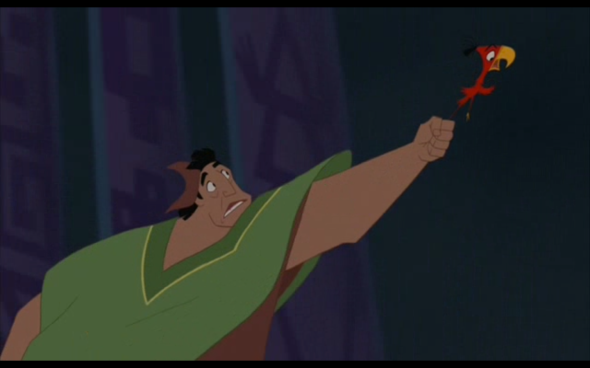 Look — he’s Iago. And here he’s the Whale Who Wanted to Sing at the Met:

Kuzco ends up turning into a bunch of different animals — it’s a lot like the Merlin vs. Madam Mim duel in The Sword in the Stone — and being chased by the palace guards, who have also been turned into various animals. They end up with two vials left, and one of them turns Yzma into a cat. But then Kuzco has to decide between saving Pacha and grabbing the vial before it falls. And he chooses saving Pacha. But through a deus ex comedia (and then a Deux ex Kronk), they get the vial back anyway. Through teamwork.

Kuzco then becomes a human again and is much more considerate now. He then builds a much more modest summer home next door to Pacha’s house, and they become friends and all that, and Kuzco learns to exist as a normal human being.

Seriously — this movie is filled with Disney things I don’t like. There’s absolutely no rhyme or reason why I should enjoy this film as much as I do, and yet — I do.

And I’m not the only one — look down in the trivia — David Mamet likes this film too, apparently.

So, while there’s really nothing I can say in defense of this movie except, “Hey, I just really like it,” I’ll just leave it at that. I love when things don’t make sense.

I think the visual gags here are awesome, and the storytelling takes what could be a ho hum story and elevates it into a very entertaining movie. So I stand by this ranking. I think this is a terrific Disney movie that could have been a disaster.

1. Wouldn’t you know it — the very first shot of the film has negative coloring in it: 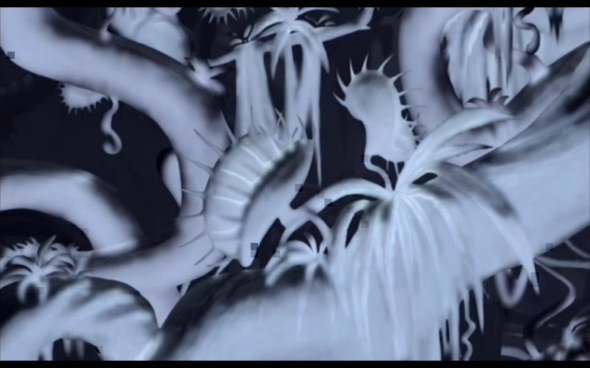 And here are some more uses of it throughout the film: 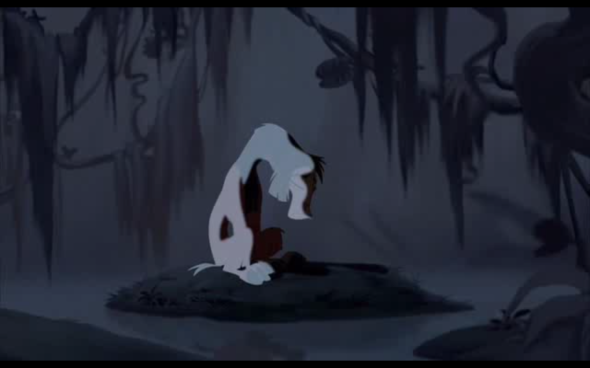 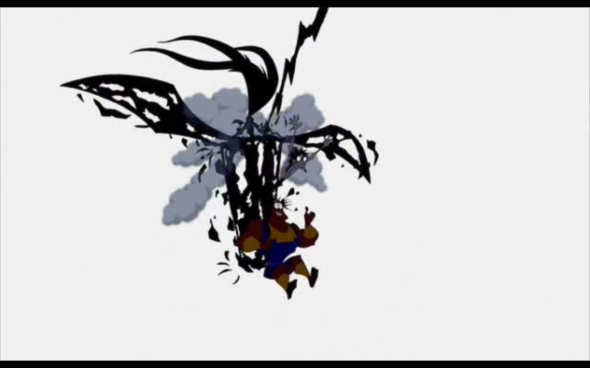 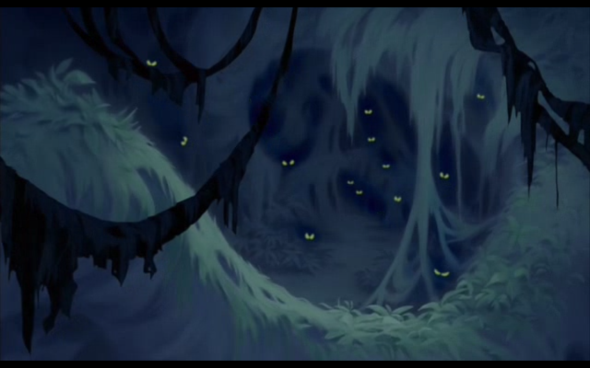 3. Nothing like a giant cock in a Disney movie.

4. Character reflections in the water — close up and long shot.

6. I love how dumb the humor is. It makes no sense, and it’s hilarious. “Pull the lever… why do we even have that lever?” 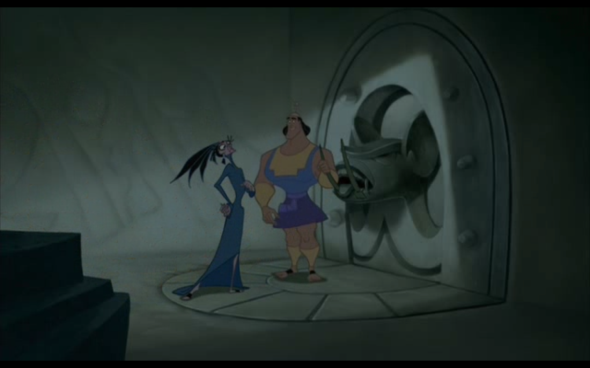 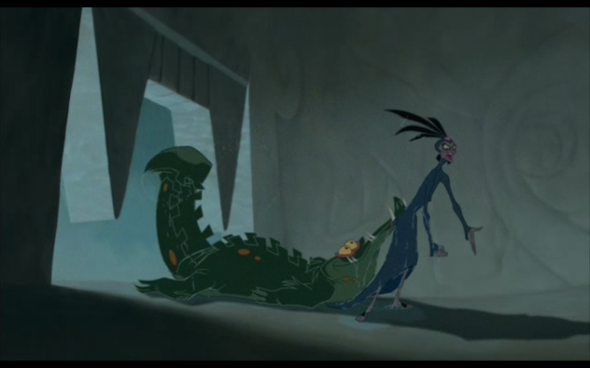 7. I love this gag — the pullback so far it goes to something not even relevant. Amazing. 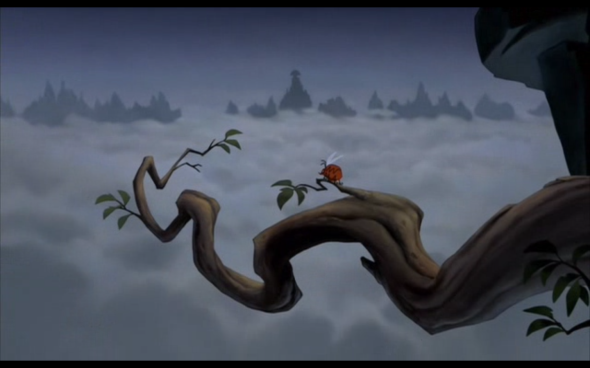 8. I love this — he stops the film and interacts with it. This is innovative storytelling (if kiddie). 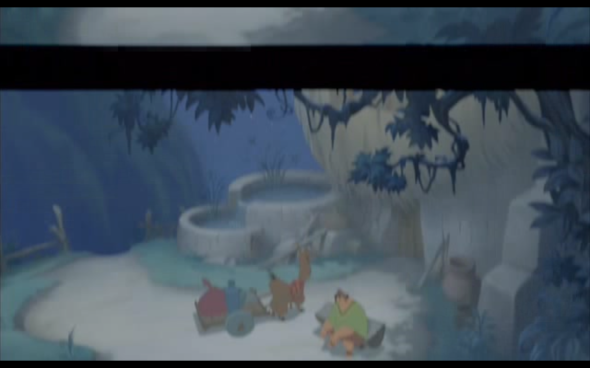 9. WHY WOULD THERE BE A SIGN FOR NO LLAMAS?!! It doesn’t make any sense! It’s hilarious! 12. I love this gag. The map gag. And then the steps appear below them and they look at them like, “What the fuck is that?” and then shrug and keep going. No rhyme or reason, yet — funny as hell. 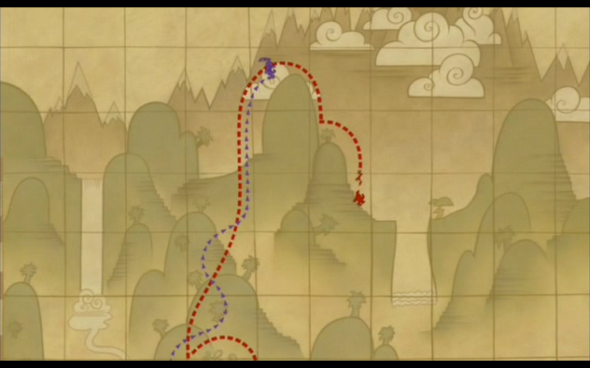 13. Again, with the illogical humor — “How did we get back before they did?”

14. Any time something is cocked like a shotgun that isn’t a shotgun, it’s always funny.

This entry was posted on August 22, 2012 by B+ Movie Blog. It was filed under Movies and was tagged with Disney, Film, Movies, Ranking Disney, The Emperor's New Groove.