My Favorite Moments in the Best Picture Nominees: Once Upon a Time in Hollywood

So my favorite Oscars tradition, aside from getting hammered and eating Chinese food during the ceremony, is, the day before the ceremony, presenting my favorite moments in each of the Best Picture nominees. I originally started it in 2011, when I felt like there was a lot of anger over certain things that were nominated (The Artist, Extremely Loud & Incredibly Close, The Help), and I just wanted to take that step back and remind myself and everyone else what it’s all about — this is because we love movies. We’re just giving out awards to the movies we liked best. It’s not about the damn awards. It’s about good movies and love of the art form. And it’s something I think we need to be reminded of, which is why I now do it before every Oscar ceremony. It doesn’t matter what wins and what doesn’t, it’s all about celebrating the great movies that came out this year.

Our next nominee is Once Upon a Time in Hollywood. 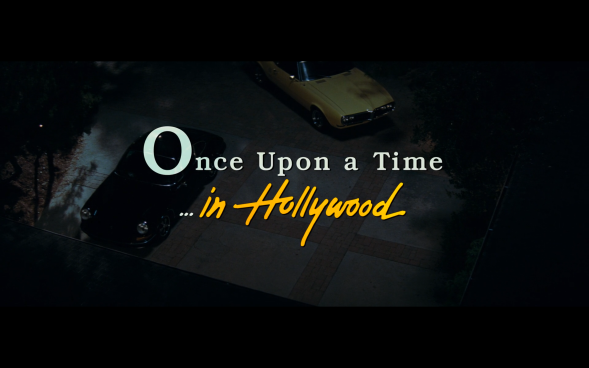 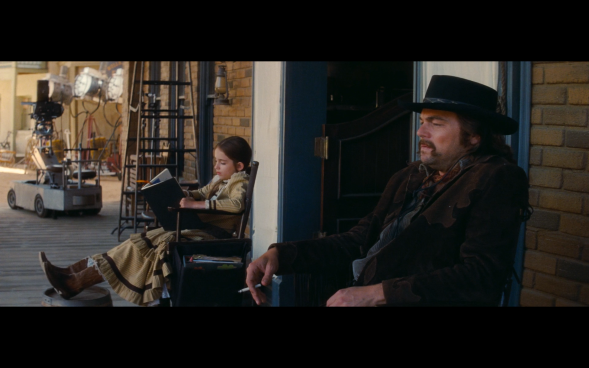 The thing about Quentin’s movies, especially the first watch — you ease into them and you’re enjoying them and they’re all of a certain level of good, but then there’s always those one or two sequences you watch and you go, “Oh holy shit.” Because Quentin is a master of set pieces. Think the bar sequence in Inglourious Basterds. Or the dinner scene in Django. He knows how to give you ten minutes of film that are just perfect. A lot of people would point to the Spahn Ranch sequence, which is one of them. But that, to me, was not nearly as good as this one is. This sequence is just perfect. And it comes right next to the Bruce Lee sequence, which is just great too.

But here, you have the stereotype of the precocious child actor. Which is just wonderful, and anyone who’s lived in LA especially understands how funny that whole thing is. But also, you have the bit about her being more mature than him and smarter than him and all of that, but then there’s the bit about, “What are you reading?” And then he’s recounting the story of the book he’s got and starting to realize how closely it’s mirroring his own life, and having this full on epiphany/breakdown in front of this child. It’s so perfectly done and acted by both Leo and Julia Butters. The other perfectly handled sequence in the film. It’s Leo shooting his show. And in a way, this is the one sequence that really cements this movie as a proper hangout film. Because you just watch like 15 minutes of him shooting this episode. And by the way — real episode. You can find it online. It’s broadly the same as what he gives you here, but he just changes it to fit what he wants to do. Kind of like that Ezekiel Bible verse. It’s mostly there, but he changed it and added and embellished. That’s Quentin. But here, you get the whole sequence of Olyphant showing up and killing “Business Bob” Gilbert and then going into the saloon to see Leo, and then they have their whole big dialogue scene. And after a certain point, you forget that you’re even watching a character film an episode of the television show. You’re just watching it all happen. And you’ve also forgotten the fact that there’s no way filming would happen the way it’s shown on the screen. Film shoots don’t work like that. Those camera moves and long takes and cuts and stuff. But it doesn’t matter, because you’re in there. And then the take continues as Leo flubs his line and has to start over and then as he fucks it up and psychs himself back up and all of that. It’s fantastic. It’s just a beautiful sequence that really only Quentin would ever put to screen and only Quentin could pull off like this. 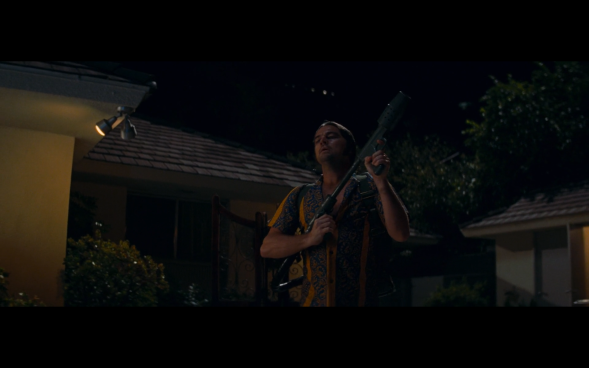 It might be the best performance of his career. He’s got a lot of them. But this is up there. It’s a fully fleshed out character. And yes, it’s funny, it’s a comedy, but he plays the complete reality of the character, who is ultimately kinda tragic in a lot of ways. Plus I love that whenever the character gets stressed out, he slips a little bit of a stutter in there, which just hints at so much backstory without having to get into any of it. It’s brilliantly done. I just think that his performance is one of those you might not necessarily realize is as good as it is the first time or two you watch the movie because you’re watching the movie for the movie, if that makes sense.

And also, I picked that shot for him because truly, I can’t believe Quentin paid that off like that. It was such a surprising moment for me. He pays stuff like that off a lot, but this is the first time it really felt like it paid off in a truly, 100% satisfying way.

How fucking good is Brad in this movie? I had two other shots I was gonna choose — him on the roof, going, “Fair enough,” and then his face right as Margaret Qualley offers him a blowjob — but this one is just so funny to me I had to put it there. He’s so good in this movie. It’s a perfect performance. You just believe this guy fully. He’s so entertaining that you almost fully overlook  the fact that this guy may have murdered his wife! He’s so great here. Fortunately everyone’s already talked about how great he is, so there’s nothing really I need to add. I’m just joining the chorus for how incredible the performance is.

What Quentin achieves in the film is just stunning. Because it’s not just that he recreated 1960s Los Angeles. Warren Beatty recreated 1950s Los Angeles in Rules Don’t Apply. But he did it with CGI, and it’s for like, one or two wide shots that don’t last too long. Quentin really shows the city off. And he uses real locations. Granted, a lot of Hollywood is built on these landmark locations like Musso’s and the Dome and Hollywood Boulevard, which are generally the same as they were 50 years ago. I remember when they shot the movie. They put up all these fake storefronts to make that stretch of Hollywood Boulevard look like it did in 1969. And it was nice, and it was cool to see. But then you see him put it to use — Pitt driving home, all up that stretch — and he really drives it. He drives from Las Palmas past Vine all the way to the 101 entrance over there. That’s a good mile-plus stretch of road that he just goes up and down. And never does it not feel like it’s not 1969. It really is jaw-dropping. And a lot of that is achievable because this city isn’t that drastically changed from those days. But it’s not like other people haven’t done something kinda similar, in terms of recreating the era. No one’s done it like this. This movie feels like 1969, and it’s truly something to behold.

This entry was posted on February 8, 2020 by B+ Movie Blog. It was filed under Movies, Oscars and was tagged with 2019, 92nd Academy Awards, Academy Awards, Best Picture, Film, Movies, Once Upon a Time in Hollywood, Oscar, Oscars.