My Favorite Moments in the Best Picture Nominees: The Irishman

So my favorite Oscars tradition, aside from getting hammered and eating Chinese food during the ceremony, is, the day before the ceremony, presenting my favorite moments in each of the Best Picture nominees. I originally started it in 2011, when I felt like there was a lot of anger over certain things that were nominated (The Artist, Extremely Loud & Incredibly Close, The Help), and I just wanted to take that step back and remind myself and everyone else what it’s all about — this is because we love movies. We’re just giving out awards to the movies we liked best. It’s not about the damn awards. It’s about good movies and love of the art form. And it’s something I think we need to be reminded of, which is why I now do it before every Oscar ceremony. It doesn’t matter what wins and what doesn’t, it’s all about celebrating the great movies that came out this year.

Our next nominee is The Irishman. 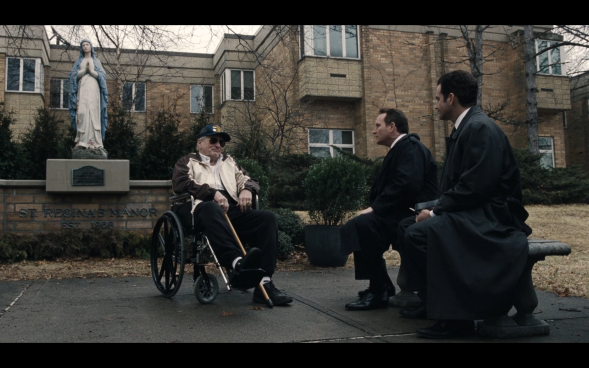 It’s not a comedy, but it is funny. And Marty’s movies usually have some kind of humor to them. Sometimes it’s more overt than others. His gangster movies specifically tend to be very funny. But this one really does have some laugh moments in it. And not just the fish dialogue. That’s funny in a different way, even if it is ridiculous.

“Talk to my lawyer”; “He’s dead”; “He is? Who did it?”; “Cancer.” That’s funny! The way De Niro just assumes that someone whacked his lawyer. Or, “You know who owns it? I do”; “Who?”; “No, I do. Not I know who does.” That’s hilarious! It might seem awkward the first time you see it, because you’re not expecting humor in that moment, but it’s a really funny moment. Or, the one that you’re really not expecting, when De Niro says his wife died, and then adds, “Lung cancer. Not surprisingly.” There are a lot of funny moments in this movie, and those are the ones I’m going to remember more than the fact that it was so long.

I love this moment. No words are said, and no words need to be said. Pesci gives De Niro the look, and immediately you know — he wants him to kill that fucking guy. That’s the beauty of simplicity, and the beauty of genre and the beauty of the language of the genre that Scorsese has developed over all these years, that all you need is a simple shot-reverse shot to explain everything you need to know about this moment and what’s about to happen.

This whole scene is wonderful. The film is very long and very engaging, but there aren’t really that many moments of tension in it. This is the one that I think of most of all. And it’s not even a tense moment that we necessarily see coming. Because, one, you never do in that line of work, and two, because quite literally, De Niro doesn’t know what he’s being sat down for. As the conversation progresses, he realizes he did something he wasn’t supposed to, and it’s only the fact that he didn’t know and is being looked after by Pesci that he’s not in serious trouble right now. Plus there’s that nice moment of “He won’t need it,” which implies everything you need to know — “You’re fine, he’s dead. You do it. Make this right.” I love this scene. He steals the entire movie out from under everyone else. Pacino is just doing his thing, and mostly you’re just seeing him do it nicely as opposed to in lower rent stuff like he’s been doing in recent years. And De Niro is just De Niro. He’s been this guy in Casino before. It’s the same kinda performance. But Pesci… this is the complete antithesis to the character he played in Goodfellas (and also in Casino). This is a guy that doesn’t need to overreact to anything. And the way he plays it is just perfect. He conveys so much with looks and glances. It’s a really beautiful performance full of restraint. And then, in this moment, you get the one glimpse inside and it just knocks you over. This might be the single best performance of Pesci’s career. 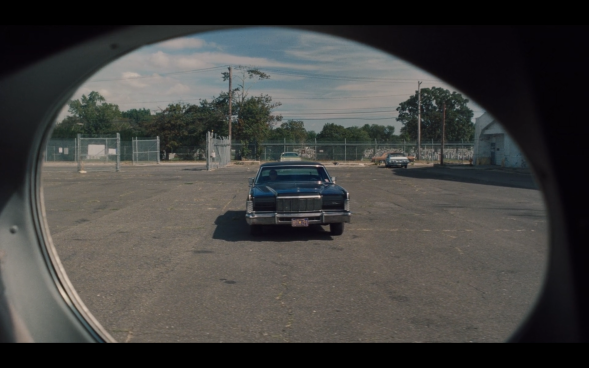 I gasped when I saw this shot come on screen. The amount of power in that image. And not just from the image itself, but also from Joe Pesci. Because we just sat there as Pesci told De Niro that Pacino was getting whacked, and then had De Niro be forced not to call him to warn him about it. And then the next morning, saw Pesci tell De Niro that it was gonna be him who did it. So now we sit there in silence as they drive to the airport. And there’s nothing said and no music or anything. Just the lingering sound of inevitability. And De Niro gets on the plane, still processing all this, and we get this shot. Seriously, the power in that moment, of Pesci just sitting there, waiting for it to be done, without any real feeling toward any of it. And then they cap it all off with De Niro coming back and Pesci just silently handing him back his sunglasses, as if he went into the store to grab a newspaper. This is one of the most powerful images of Martin Scorsese’s career, and I hope we’re all gonna give him credit for that.