And now Best Animated Feature. And you might be saying to yourself, “Mike, there’s only ten films on this shortlist and they’re all shorts. You probably could have done this one before some of the others.” And that’s true. Probably could’ve done it on day three or four if I wanted. But, I have a story to tell you…

On the day the shortlists came out, I was sitting around waiting for them to be released. I figured they’d put them out around 11/12 o’clock LA time. But they didn’t. They ended up putting them out at 3. And in those four hours in between as I was waiting I thought, “Let me see which ones people think might be nominated so I can try to get a hold of them preemptively.” Since the minute stuff gets shortlisted, they pull them down offline. Happens every year. So I start looking. Then, I find a list of all the eligible shorts for this year, which is a list I didn’t even know they released. But someone did. A list of all 96 eligible shorts.

Long story short, I decided to try to find all 96, ended up finding half of them and later on today I’m gonna post a full article going over all 96 eligible shorts (95% of which I either have seen fully or have seen a trailer for). Because I can and because it’s fun and because animated shorts are lost treasures among the filmgoing experience and I want to try to help bring them back. But before that, we’ll go over the shortlist. This is the dinner, that’ll be the dessert.

Fortunately, because we live in the age of Disney+ and Netflix, six of these shorts are readily watchable right now.

The full short is on Disney+.

If Anything Happens I Love You

The full short is on Netflix.

The full short is on Disney+.

The Snail and the Whale

The full short is on BBC iPlayer.

You can watch the entire short here. 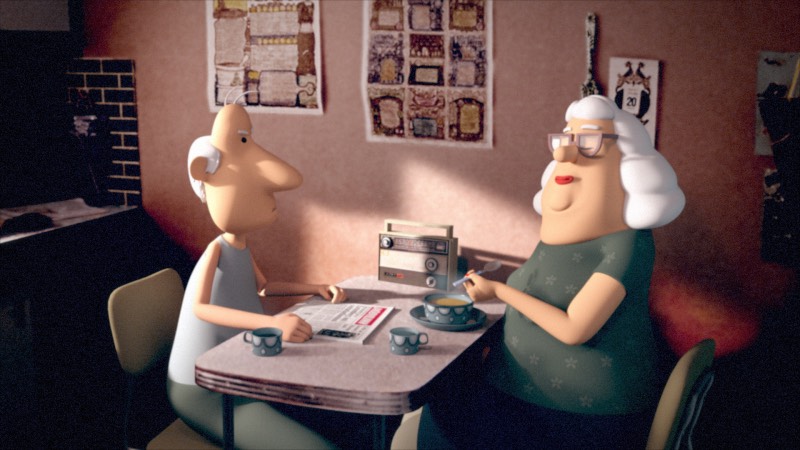 Also, in case anyone is interested, of the eight I’ve seen, I loved If Anything Happens I Love You and To Gerard, I really enjoyed Burrow, liked Out despite having some problems with it, am generally positive toward Yes-People, was indifferent toward Snail and the Whale, Traces and Kapaemahu despite liking the animation, and have not seen Opera or Genius Loci.

If I were picking a category right now, I would take If Anything Happens I Love You, To Gerard, Burrow, probably Genius Loci based solely on the trailer and then the final spot would either be Out or Opera.

I will say, not that it’s remotely relevant because this is our shortlist — there are a couple from that list I’m gonna post later that I feel were better than a few of these. Not that I’m ever gonna get too deep into it, because this is what we have and this is what we’re working toward, but this is my plug to try to get you to look at some of those shorts just to enjoy them as works of art.

Based solely on what I’ve seen, since this is one of the few categories that speaks for itself, right now, I’d say this is how I see this ending up:

If Anything Happens I Love You

The Snail and the Whale

I feel like If Anything Happens I Love You is on and will strongly contend for the win. I think Snail and the Whale has the pedigree to get on, with one of its directors having been nominated twice for shorts just like this (Gruffalo and Room on the Broom). It’s hard to bet against it, even though I’d be happy to be wrong there.

Pixar is the interesting case scenario here, as they have two shorts on the shortlist. Out is socially important, but I’m wondering how many people will be turned off (as I was) by the fact that the lead is a dog for half the short. Maybe they won’t be. Meanwhile Burrow feels appropriately cute enough for them to go for, but the story is kind of standard for this type of thing and doesn’t really have that extra ‘wow’ factor that usually propels Pixar shorts to do well here. The safe play is to guess both, but something tells me a split is more likely to happen since this branch has continually shown an aversion to Pixar/Disney overload and has usually been concerned with overall short effectiveness and artistic nature in this category specifically. So I feel like at best only one gets on. That feeling might change once I have more time to think about it, but now I think I’m gonna split it and assume one on/one off. I might end up flipping the two in the end or even put both on. No idea.

Genius Loci just looks like the kind of artistic short they go for and put on. But again, easily could be left off. I haven’t seen it so I don’t really have much else to go by. Opera is another one I have no basis for knowing, though it just feels like the kind of film that could or would be nominated. But again, I don’t even really have a trailer there, so I don’t know. Could just be left off and it won’t ever matter. That happens to stuff every year and is one of the hazards of guessing this category.

And To Gerard — that’s a tough one for me just because it’s one of the more emotionally affecting short, but I also see that DreamWorks hasn’t really made it on here, and the last time they had a short on the shortlist, it was Bilby, which was also quite cute and was ignored. That’s a 50/50 and I’m not entirely sure how that’s gonna turn out.

Traces, I feel is one of those shorts that looks the part for a nominee, but also is something I could easily see getting left off. There was a short a few years ago called Prologue that got nominated, and that was similarly pencil-drawn, but was just a few minutes of two Spartan warriors battling. And looking closely at it, I feel as though the reason it got nominated was because it was animated by legendary animator Richard Williams (who actually died fairly recently too). So I’m thinking that might have been the reason that got on over anything else and wondering whether that means anything for this one’s chances. Right now, I’m thinking no, even though this clearly could be a nominee and most people wouldn’t think twice about it.

Kapaemahu doesn’t feel like it’ll be nominated, but I’ve been very wrong before here. That’s the one I most feel won’t get on, even though, again — I’m always wrong here. 2/5 is not uncommon for me in this category. So I don’t really know anything and can only go by my gut, because it’s all I have to go on.

Yes-People is an Icelandic short that plays on the man ways to inflect the word ‘yes’. A bunch of people in an apartment block go about their day, and the only words spoken throughout the short are variations of ‘yes’, ‘yeah’, ‘yep’, etc. And each visual situation they set up changes the way the words are spoken. They get all the mileage and jokes out of it that you’d expect (singing, sex, awkwardness, frustration, etc). Personally I’d have enjoyed if they just went and used the word ‘fuck’ instead, but I guess they got essentially the same jokes out of it while making it more PG-13. This is one of those shorts that I’d almost never guess because I can’t imagine they’d go for it yet it’ll be the one that gets on. At this point I’m almost convinced it will be nominated just because there’s always one of these every year that happens. Though I’m also wise enough to not completely disregard it. I’m leaning toward probably on at the moment, but I feel like in the end this will go from ‘never gonna happen’ short I didn’t guess to ‘could happen’ that I didn’t guess. But we’ll see what happens.

The two I think I wouldn’t guess on a list would be Kapaemahu and Traces. I think I’d just let myself get beat there. Obviously the safest category would be both Pixar shorts, Snail and the Whale, To Gerard and If Anything Happens I Love You. That would cover literally all your bases and probably get you at least 3/5 unless they choose violence and go entirely opposite.

Yes-People, Genius Loci and Opera are the three where I really have no idea because I wasn’t able to see them. Genius Loci’s director was an animator on Song of the Sea and Secret of Kells, and I wonder if that holds any sway with them. Yes-People feels like the kind of short that I’d dismiss and then it gets on. There’s usually one of those every year or other year. And Opera — it could just be a technological marvel and that’s why it gets on. I truly have NO idea what we’re gonna get.

My gut tells me Yes-People and Genius Loci are serious contenders, with Opera the mystery. I feel like they’re gonna split the Pixar vote and then something else I figured would get on (To Gerard would be the one, because they always take off one I think should be on and then put on something I’m not necessarily crazy about, which in this case would be Snail and the Whale) will go on in its place. But we’ll see what, if anything, changes over the next few weeks and if I can see those final three shorts.

The full list of 96 eligibles is coming in a bit and I urge you to check some of those out, because they are quite wonderful.