Fun with Franchises: Our Favorite Images from The Marvel Universe – Captain America: The Winter Soldier

That said — here are our favorite images from Captain America: The Winter Soldier:

Like the long shot. The colors. I also like when columns and things are in the foreground (or midground) and our characters are behind them. Don’t like the scene, but we’re not picking scenes, are we?

This was not a bad way to start the movie. Columns, framing, dawn, colors…though I really can’t see D.C. and running in the same shot without hearing the words “our nation’s capital” in the Forrest Gump voice.

I like this shot just because it’s got the nice obscuring of the frame, single take as he beats the shit out of the guy (after a tally ho and before a ghosting), and it feels weirdly like someone’s sitting behind this with a video camera. It’s the most cinematic and realistic this sequence feels (since a lot of it is CGI and wide shots or shaky action that’s too close to tell what’s really happening from shot to shot.

This will seem weird, but one of the reasons I love this shot is because of the big chains that are still present on large boats. I was always fascinated by the chains and rope you’d see on Victorian-era sailing ships, because the scale was so ludicrous. There’s the one really iconic shot of the engineer and industrialist Isambard Kingdom Brunel in front of the SS Great Eastern, and I always think of that as the perfect image of that snapshot of the Industrial Revolution. I know that has nothing to do with this, but I saw the chains and loved that. 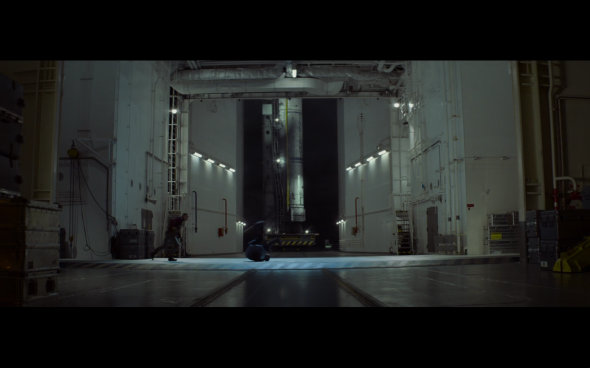 I like this angle, and I like this location. If the camera stayed here for like a minute as they fought hand to hand, I’d have probably put this movie top three for Marvel all-time. As an image, though — terrific.

This is only going to remind me of the second to last boss fight from the game Resident Evil 5. A cargo ship is a good place to have a boss fight, especially if it’s wide open. I enjoyed the fight, particularly because it was just that — a fight. There were no helicopters or anything like that. They did a good job here.

The image speaks for itself. The only problem is that they fucking speed right past it and don’t let it linger.

Thematically, this is a really strong shot. Unfortunately, it comes off like the shot of Tony offstage as the towering image of his father addresses the Stark Expo audience — it’s amazing in theory, but falls down in execution. They don’t linger on this shot, either. It’s only because Mike caught it that we’re able to enjoy it here.

I feel like only white people won’t understand how terrifying this image is, despite its simplicity. The coloring of the cars really adds to it, too.

This is WAY too close to home given what’s been going on over the past few weeks. Months. Years. Centuries. Yeah. 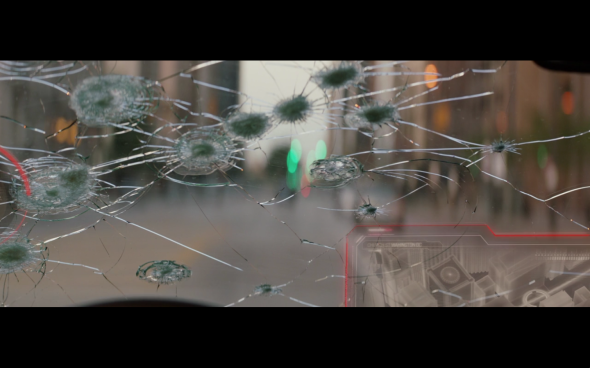 I love the bullet holes in the window. I’d have loved if this was a fifteen second shot and held this focus as the chase happened. But even so, the image is nice.

Nobody ever does anything good, though. You notice how many of these shots that ended up on this list were shots that you don’t even remember seeing from just watching the movie. It’s not like a really well shot movie, where there are entire scenes that you could take almost any shot from and talk about the awesome composition — Marvel makes the screenshot guy really sing for his supper.

7. Like Ocean’s Eleven, But With a Dead Black Guy Instead of a Fountain

That was one of the funniest things that I’ve read on this blog for a long time. And it’s one hundred percent true. Seriously, play Clair de Lune and stare at this image. It’s perfect. If need be, skip to 1:49 for the part that really makes it.

The movie actually stops to appreciate this shot. If there’s one thing mainstream movies featuring older actors who were huge stars should do, it’s take a moment to shoot them really well and appreciate them for a second. This movie does that.

Robert Redford knows how to stand silently and be an awesome presence. There aren’t too many actors who know how to do that. I attribute that to all the baller 70s movies he did.

Overhead, plus all the bodies. This is a nice image. It’s a better version of the one from the first movie — you know, after he kills Thorin OakenHYDRA and looks down at his Popeye arms like, “What am I capable of?” Too bad he’s not contemplating that now, and is thinking, “I can’t believe you assholes tried to fuck with me.” And probably also, “Well shit, now everyone wants me dead.”

The only caption you can put below this shot is the word “motherfucker.”

…I kinda just want the subtitle to be Samuel L. Jackson’s face.

The ropes are nice, plus you get the ass on the way out.

This was MAJORLY Bourne, first of all, but second of all, I want to point out how great it is that movies are starting to get back into the really low angle shots again for car chases. I don’t know what it was, but there was a really long stretch where I almost only ever saw aerial shots or shots from alongside the cars. This is for the Matrix movies, the Fast and Furious franchise, etc. This kind of shooting is great for action.

“I know Fury’s dead, but I kinda want a Starburst.”

This image is very amusing to me. This feels like something that should be unscripted. The double take of, “Oh shit, they got some Bazooka Joe up in here?” I actually wish this wasn’t part of the plot and just happened.

I figured he was wondering what the hell ever happened to Beemans Gum.

Him, the shield, framing. I wish I got more of a sense of his head down here. Him reflecting. Without that it’s just a good image. I’d have liked the contemplation aspect too, for it to be a nice quiet moment. It almost is, though. I’ll take that.

I like it because it’s both innocuous, but at the same time — you fucking know what’s about to go down. This is a badass shot.

This guy on the left. I’m looking at how little neck he has. He’s like the Greece of neck deficits. And you know they’re all about to jump him.

Also, he’s got a giant fucking scar on his head. You know they only cast that guy for that scar.

I like people standing in a giant room of computer banks. I like old timey shit. Not all of this is CGI. I think they just extended the scene. I like that they made this old looking shit. Make more of this.

I used to hang out at my mom’s office when I was tiny, back when she was working telecommunications for Aetna in the early 90s. And there were still rooms like this — maybe a little newer — where there were massive banks of computers and cables and wiring and lights blinking. There was a great smell to all that plastic and all those little fans buzzing. This is a great place to be.

I like the simple image of the HYDRA logo over the White House. It really is simple and gets the point across better than the exposition. The ultimate joke, of course, is that it only lasts for like half a second.

Someone was paid to make this, and if you read the articles, we found out who. 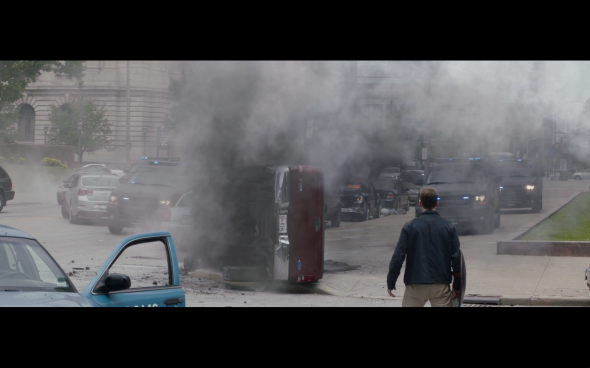 “This isn’t where I parked my car.”

I’m just glad it was a Ford. There was WAY too much Chevy going on in this movie. Seriously, with the Chevy. 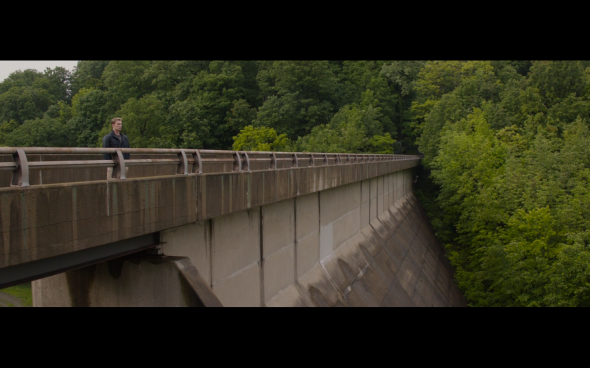 Small person, big frame. Like Twilight. If only he wasn’t there, I’d like this shot more. There’s also a shot that didn’t make this list that’s shot from a lower angle. And in fact, there’s a shot later in this scene that’s shot from a lower angle, when him and Mackie are talking, and I joked that they’d start talking like Charlie Brown and Linus on the wall. More movies should do that.

This is a distance that most movies don’t mess with anymore.

I do like this. Just cut to a dead body in a giant office with nothing around him. I’d love it even more if this was an extended shot of actual action happening out the window. Imagine that. Seeing Falcon being chased by a jet for like ten whole seconds and here we are, with this dead body just sitting in the foreground. Love it.

The battle raging outside is not even important. You don’t notice it because Robert Redford is dead in the foreground. Extended shots of dead bodies are only morbid in realistic movies. Otherwise, they’re pretty good entertainment. Also…he fell funny.

Tomorrow we go over our final thoughts from the film.