The B+ Movie Guide: The New List (Part XXXV)

I gave Colin a giant list of 500 movies, and he finished it. Of course I’m gonna come up with another list.

This one is for everyone, though. Not specifically for Colin. This is raw material for everybody, should they choose, to go out and see more movies. Not all of them are essential. Most of them are just awesome. I told Colin that once he finished this list, I’d give him another one that was more fun than work. Geared toward cool stuff that he’d enjoy.

I went through and found 1,000 more movies that I think either need to be seen (leftover “essential” films) or are just really great and would be enjoyed by most who see them. Here they are:

Burstyn is a housewife whose husband is killed in an accident. So she takes her son and goes off to try to fulfill her dreams. It’s a great film and a terrific performance. Diane Ladd got nominated for this as well, and the film also has Kris Kristofferson, Jodie Foster and Harvey Keitel in it. One of Scorsese’s most underrated movies.

I love this movie so much. Here’s the story behind this one: my best friend Nick was over the house (we grew up together, and then when I moved away, we made it a point to hang out for a week every year), and it was New Year’s. And this was during high school, which meant that I was completely nocturnal. Anyway, it’s midnight, and we’re flipping through channels. And I see that on AMC, Magic is about to come on. And I’m like, “Oh man, you have to see this movie, it’s incredible.” So I show him that. And then it ends and it’s like 3 am. And we just leave the TV on. And right after that, this movie comes on. And we’re not really fixing to pay attention, we just leave it on as white noise. But then, it begins, and they explain the “Werewolf Break.” And from that point on, we’re thinking this is gonna be hilarious. And then we watched the movie, and it was amazing.

For those who don’t know what the Werewolf Break is — this movie begins by telling you, just before the climax of the film, they’re going to stop everything for a thirty second “werewolf break,” where you, the audience, will have thirty seconds to guess who the werewolf is. It’s pretty wonderful. And then the rest of this film is this blaxploitation movie with Calvin Lockhart as this badass, and Peter Cushing is in it, and Michael Gambon — it’s a lot of fun. I’m such a huge fan of this movie.

All-black cast film. Diahann Carroll got nominated for Best Actress for this. This is worth seeing, first because it’s entertaining. And second — you should really see what movies were made for black audiences at all points in film history. (And for Colin — this will be worth watching because you’ll recognize a lot of James Earl Jones line from this. Like, “Your mama and me are goin’ on a date.”) It’s about Carroll, with six kids, on welfare, trying to make ends meet. She starts dating Jones, a garbageman. It’s a fun movie.

I know, we all love the Nicolas Cage version. But this one’s all about the cars. Features a great 30 minute car chase that wrecks something like a hundred cars. It’s great. You should see it for that alone.

This is better than the Adam Sandler movie. Robert Aldrich directs. Burt Reynolds, Eddie Albert, Ed Lauter, Bernadette Peters, a bunch of NFL players, and Richard Kiel! You probably know the story — convicts versus guards in prison, because Reynolds is an NFL quarterback. It’s so much fun.

This is probably essential viewing. Fassbinder is a unique voice in foreign cinema, and this is probably the one to watch. It’s about a woman adapting to life in post-war Germany. It’s interesting. I’ll say that. Fassbinder was certainly known for making evocative films.

John Wayne making a modern day cop movie. I find that fascinating. People think of him as making old school westerns and things. But here, he’s playing a cop in Seattle. It’s weird to see him driving a car and doing a Clint Eastwood movie. It’s actually also an entertaining movie to boot. You should see it just to see how weird it is to see John Wayne in a cop movie.

Sidney Lumet directs. Hercule Poirot mystery. Train is stopped because of ice and a murder is committed, and he has to figure out whodunit. Albert Finney is Poirot, and he got nominated for this. Ingrid Bergman won Supporting Actress for this. Also in this — and this is why you see it, aside from Sidney Lumet and it being a classic — Lauren Bacall, Martin Balsam, Jacqueline Bisset, Jean-Pierre Cassel, Sean Connery, John Gielgud, Wendy Hiller, Anthony Perkins, Vanessa Redgrave, Rachel Roberts, Richard Widmark, Michael York. No reason not to see this.

One of the greatest 70s thrillers of all. Alan Pakula, Warren Beatty. He’s a reporter investigating an assassination and gets involved in a conspiracy. It’s great. Just watch it. Trust me. One of the great endings in cinema.

A rock opera version of the Phantom of the Opera. Directed by Brian De Palma. It’s great. Such a cult classic. This is so unique and such a cult movie that it’s actually essential. It’s a lot of fun.

Clint Eastwood and Jeff Bridges. Heist movie. Bridges got nominated for Supporting Actor for it. It’s good. Michael Cimino wrote and directed. His first movie. Because of this he got to make Deer Hunter.

Ha ha. What do you do after you make Deliverance and can direct any film you want? Make Zardoz, of course. Zardoz is a giant flying stone head that spits guns out to peasants. I’m not making that shit up. It’s such a bizarre movie, and features Sean Connery wearing this: 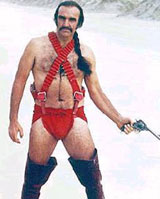 Trust me, it’s worth it.

This is the first half of a double feature. A fun sci-fi 70s movie. This is the basis for Twisted Metal. A cross-country race where drivers get points for killing pedestrians and being as violent as they can. Sylvester Stallone plays the villain and David Carradine plays Frankenstein, the main character. Lot of fun.

This sounds like a Robert Ludlum novel, doesn’t it? It’s not. But you’d have believed me if I said it was. Clint Eastwood movie. He’s a former assassin who poses as an art professor and is also a mountaineer and comes out of retirement to look into the murder of an old friend. The middle of this movie is a giant mountain climb. And you know how I love those. George Kennedy is also in this, by the way. Really entertaining film.

Philip Marlowe. Done again in the 70s. This time, Robert Mitchum plays him. That’s why you see this.

Tarkovsky. This is one — it’ll appear on all the essentials list, but I don’t love it. I can appreciate it, but this just isn’t for me. Give me another American film from the 30s over this any day. It’s clearly his most personal film, and I guess that resonates for a lot of people. I don’t know. I have to mention it because everyone thinks it’s essential. To me, stick with Ivan’s Childhood, Solaris and even Stalker before this.

Thought for sure this was on the original list. Oh, well, it goes here. Consider this essential. It’s a weird movie. But totally engrossing. An Australian girls school goes on a (insert title here), and a few of the students and a teacher go missing. And no one can seem to figure out what happened to them. It’s a haunting film. Possibly Peter Weir’s best. And he’s made some good ones.

This entry was posted on September 30, 2015 by B+ Movie Blog. It was filed under Movies and was tagged with B+ Movie Guide, Film, Movies.