Fun with Franchises: Our Favorite Images from The Marvel Universe – Thor: The Dark World

That said — here are our favorite images from Thor: The Dark World:

I like the framing. I like when most of the frame is obscured and you get a thin strip of color. And it sucks less than most of everything else.

I guess I like the colors, but it does look a little too much like Magic: The Gathering for me to really go along with this. The most impressive thing is that they framed it the way they did, without showing everything. Restraint will get you far.

We’ve all been there.

I love that this is 95% black and just her face standing there. This is the face when you’re hiding in the closet before you stab someone to death in a dark room.

This was so dark that I couldn’t even really see it on my screen as I was watching it. One of those shots that you really appreciate in the theater, but when it’s on a glossy laptop screen, you can’t see anything and decide to check your phone.

Symmetry and this set is nice, albeit more CG than last time.

There’s symmetry and it looks better than it did in the second movie, which is good. I like to see progress, though we didn’t get too much of it in this film.

Because f you didn’t know this was space, this could be straight out of a costume drama. Like, The Jewish Duchess or something. (Jew Duchess? Too semitic?) I like seeing this out of context.

This is back to Revenge of the Sith, when there were actually a lot of halfway decent costume moments and pretty good shots between Anakin and Padme, but I refused to put them on my shots list. I feel like really noticing and appreciating one of Natalie’s outfits in these movies is like realizing that your childhood female friend got hot out of nowhere. At first you don’t see it, and then, even when people point it out, you’re like, “What? Nah….” And finally you accept that, yes, that’s a good shot and her costume looks good here. 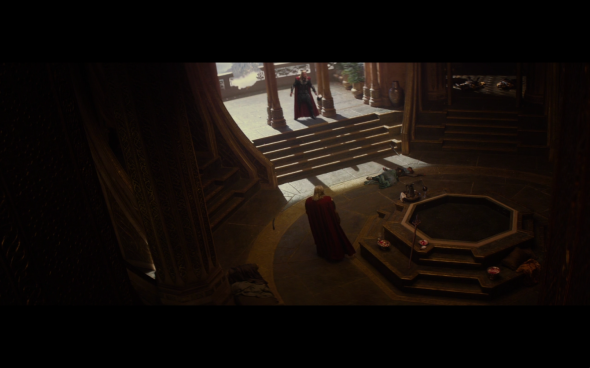 The only thing missing is a ceiling fan right in front of the camera.

This shit made me angry in the movie because this image lasted for all of one second. It’s such a dramatic moment and so much better than the rest of the drivel in this movie! Why would you not hold on this?

I like this, because you get character development in a single image without dialogue. They should really do more things like this and put this kind of thought and care into everything else.

This is what I’ll be talking about in my Final Thoughts. They hold him out as an offering of what this movie could be more like, and they leave us with these little moments. More of Hiddleston, less crap.

Different than the previous one. This one is more about the stuff strategically placed around the frame, and the berries looking like blood under his feet, and the weird shit stains on the walls. His perm is out.

I would so want to be the person who had to fuck up this room. Smudging the walls, making sure the berries are strewn just right. If there’s a lost art in Hollywood, it’s berry strewing, folks. This was a fantastic moment and a great cut to him looking unhinged.

It’s just a clever moment. It works. One of the only thing in this movie that does.

This is the kind of thing we like in a fun, lighthearted movie with superheroes. Hang the god hammer on the coat rack. These are easy moments, and we can enjoy them when they’re done right, which is slowly, quietly, and calmly. No loud crash, no reaction — just this moment. 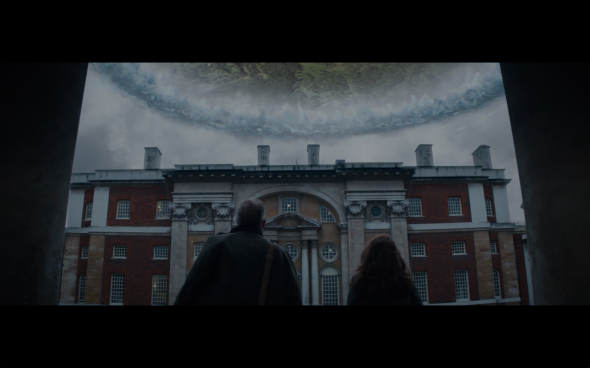 Mostly framing. Again. I like the boxy nature of the frame. Other than that, I got nothing. I had nothing else, really.

This perspective reminded me of one of the London shots from Pirates. At least I think it was. Yeah. This one. It’s not as good, and the angle’s different, but it’s the same general idea. Frame your shot, throw something symmetrical and British in front of it. Not bad. This is where we are now on this blog. Just a useless, encyclopedic knowledge of individual franchise shots. 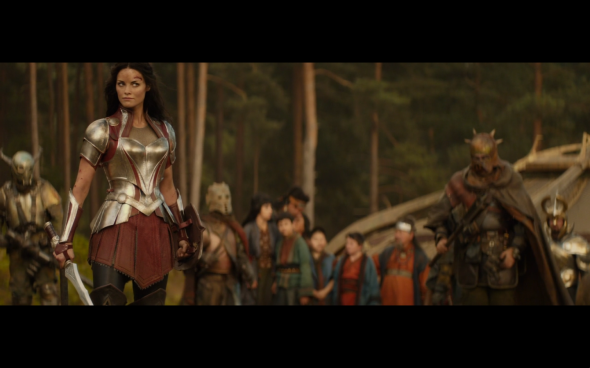 “You wanna do what in the middle of the battlefield?”

The unbridled sex look. Though Thor might be into using bridles or reins. I don’t know. I’m not one of those weirdos who knows about leather.

I like how it’s just a body lying perfectly still in a big room shot from afar. Start any movie with this image, and you’re immediately intrigued.

This is a shot length that more people should snuggle up to. The medium-length shot has been nearly obliterated from the blockbuster film’s visual vocabulary, along with prolonged and extreme closeups. We get close shots and really massive wide shots. Come back to this. Put your character in a box about 1/50th the size of the screen and let us do something with that for a few seconds. 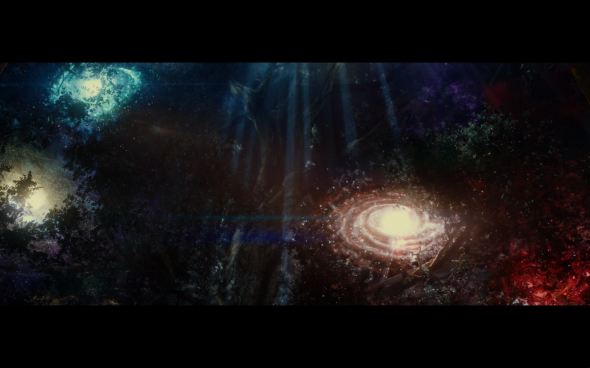 It’s colorful, almost abstract… that’s about it. Just needed to round out the list.

Cosmic bullshit with colors. This movie is a desolate wasteland for shots. 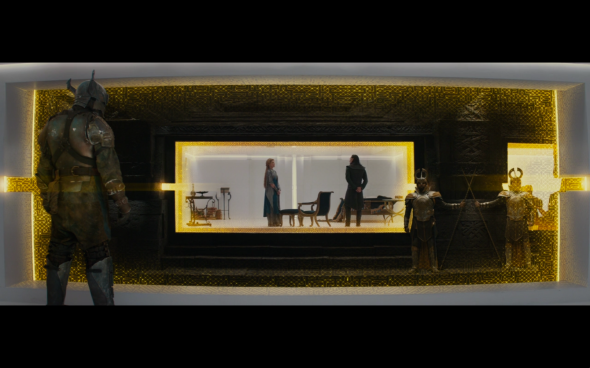 Love the multiple planes going on here. And the amount of rectangles going on.

Multiple planes of action? That alone puts this on the honorable mention list. But the chintzy CGI kind of wrecks it for me. And why have a prison with no bars? Why would you eliminate the need to shoot through something and make more interesting shot compositions? It’s baffling.

Light this better and it might make the top ten. Even despite the CGI. This is nicely framed. Although it also lasts about two seconds, like many of the good shots in this film.

This was an image for a second because it looks like a painting. But again, it lasted a second. They don’t want you to enjoy anything visually for more than a second at a time.

I really don’t think you guys truly understand what we’re dealing with here.

This is where we’re at. Don’t even remember when this happened. And could you identify this as a shot from Thor: The Dark World? One of these days, when we have a (another) truly shitty movie, we’re going to put in a stock photo from somewhere else and see if anyone notices. This could just as easily be from The Discovery Channel. You’d never know. And yet, still better than the majority of the movie.

I probably would have put this higher up, like on the top 10. I like the color, I like the silhouette, and I like how the leaves are lit up. It reminds me of something that I can’t quite put my finger on, although you can rest assured that whatever I’m thinking of was a better movie. So there’s that.

I downgraded this because it looks like what computer animation looked like in the late 90s. Or, better analogy, this is the CGI equivalent of what a Geocities page with gifs would look like now.

I’m counting these as half-shots. The overhead is nice, but that’s because a real location looks nicer than the fake shit. And the other one, I like, as a showdown shot, but it’s basically Deathly Hallows done again. So I’m giving them half entries.

We get it, England. You’re dark and stony.

I actually like this moment enough that I wish it worked better.

This Earth bitch likes him too. Maybe he got to thinking here that he could have multiple Earth bitches. Probably thinking he could mind that gap. Though I might be the only person who’s more interested in how the guy behind Thor seems to be checking out his ass around the cape. You like what you see, British dude? 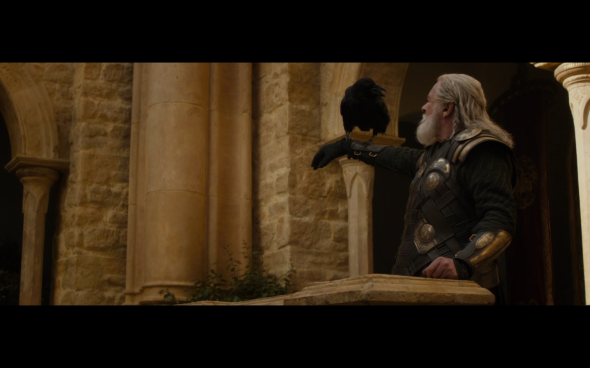 There’s Anthony Hopkins, anyway. Just that’s enough for me. What a bad movie this was to look at.

Tomorrow we go over our final thoughts from the film.