Fun with Franchises: Our Favorite Images from Indiana Jones and the Temple of Doom

That said — here are our favorite images from Indiana Jones and the Temple of Doom:

Don’t you love a good evil track in?

No? Oh well, what are you gonna do?

Anyway, let’s get into it.

My personal favorite shot in the movie. This is so funny. He’s just met Willie, who makes a dumb joke about how archaeologists are funny men looking for their mommies. And he says, “Mummies,” and then sits down and looks RIGHT at the camera. Everyone should do this when they make a terrible pun. Plus, in a way, he’s acknowledging the terrible writing and how awful her character is. But the way he just sneaks the glance is so goddamn hilarious that I wish it were done more (albeit properly).

This needs to be a meme. I can almost guarantee we’re going to use this shot again.

2. Reveals are the key to comedy

This is such a great shot. “Nice try, Lao Che!” after all of that. And he thinks he got away. And then he closes the door and you realize he’s on Lao Che’s plane. It’s great staging for one, and great storytelling, because it opens up a whole new sequence right after it.

There’s that smile. That’s the same smile when he told Belloq, “Come down here and I’ll show you! Hahahaha sonofabitch.” This is the smile that sets up the low that follows for comedy. This was a great visual gag. 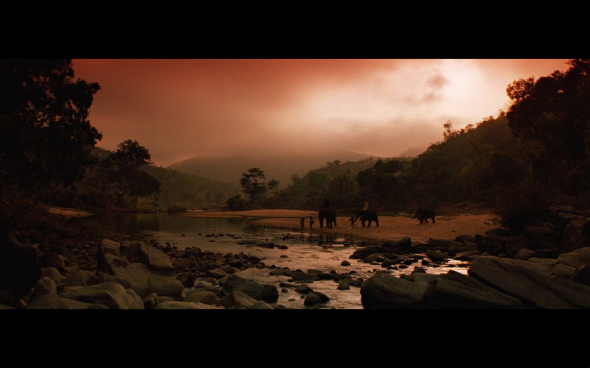 Wide shots are great. And it’s about the coloring too. The red makes it look nice. Plus, so much of this movie is spent around poor areas that it’s nice to see nature.

There are so few wide shots in this movie, how could we not? You really get excited about the things you don’t have, don’t you? These movies need wide shots. Less jungle, fewer caves, more desert.

The first one is all about the matte painting. And how it looks like the Witch’s palace from Oz. The second one is great because it make it look like a wide shot out of Black Narcissus.

I also think we picked a shot like this from Azkaban, because I remember it being the shot where the Whomping Willow fucks up a bird at the end of it.

This is just fucking beautiful. There’s not other reason for this to be here than that. And it allows me to tell you all to see Black Narcissus, which is one of the ten most beautiful films ever shot in history.

These aren’t really images most people remember from these movies, are they? It’s kind of a shame that everyone has to remember all the bugs and not remember more of this. If they’d spent more time on the palace and less time on gross shit, we may have appreciated this movie more.

Because it epitomizes the adventure movie. Him, with his hat, his bag and his whip, walking into the unknown.

This is Indiana Jones, if only for 5 seconds. We’ve got the silhouette, the hat and the jacket, and he’s walking into the darkness. This is adventure — like if you took Star Wars and reduced it to that one scene in Empire where Luke goes into the cave. Even that wasn’t this adventurous. 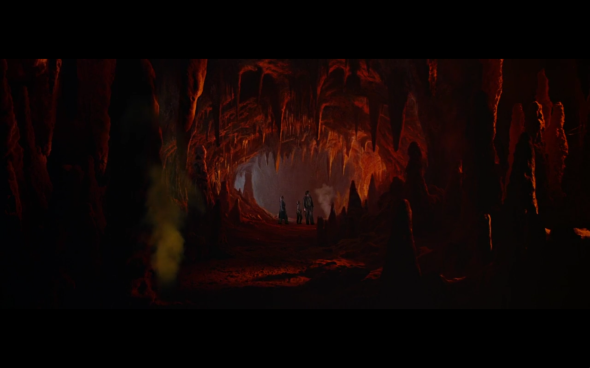 This is very Journey to the Center of the Earth. Plus it’s just great framing. And matte painting. It looks like they’re being swallowed by the cave mouth. The only thing that I question is how all the sets look smaller than this, yet this shot makes them look enormous.

You know, it’s really easy to forget how much awesome color is in this movie. This looks like a 1960s set. Like some shit out of Jason and the Argonauts or one of those Greek mythology epics where they go to hell. 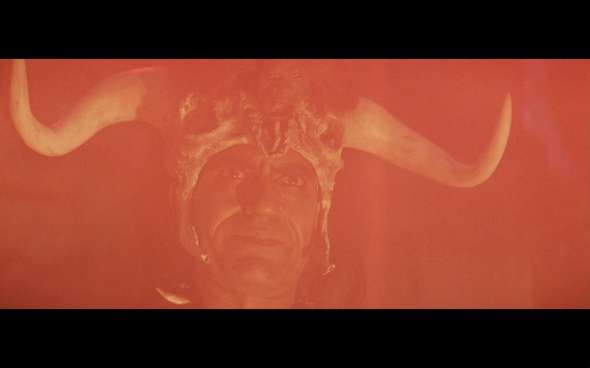 What an awesome character. And messing with the color the way that they did — gutsy. They could have not, and it would have been way less impressive. But they did and we don’t have to dislike this movie completely. 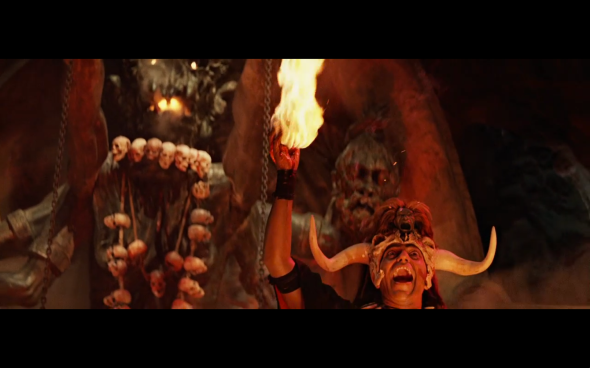 He’s holding a flaming heart and laughing like a crazy person.

This moment — it was always funny to me, and then I finally heard the Louis CK bit that put the feeling into words. It’s one of his really old bits that he did like 15  years ago, and it’s basically that he was on the street and eating a peach, and someone across the street is waving at him, so he starts to wave back, with the peach in his hand. And then it turns out the person isn’t waving at him, so he’s just a guy waving a peach, so to save himself from that embarrassment, he starts yelling, “I have a peach! Look at my peach! Look at it!” And that’s what I hear when I see the glee in this guy’s face. Look at my flaming heart! LOOK AT IT!

This is the one shot I’ve always associated with this movie. It just feels like it epitomizes everything in a single image. It’s got that coloring that makes it look iconic, and it’s also everything you want out of an adventure movie image.

This is getting into real action hero territory here. They started ripping all his clothes off and stuff. And he’s ripped in that old-fashioned sort of “I’m actually built like this and didn’t work out for this movie” kind of way. But the hat’s still there. And he looks like a crazy person. I don’t really have much to say for the composition or anything.

All right, let’s burst into the honorable mentions. 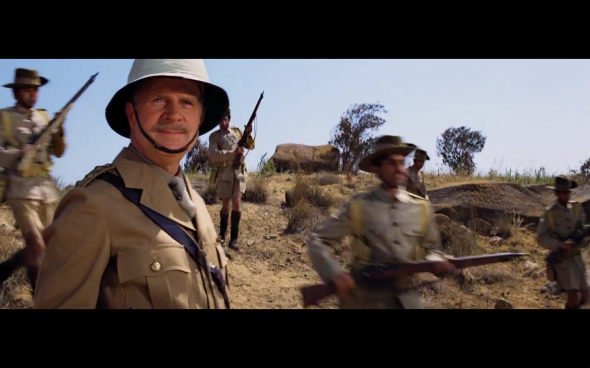 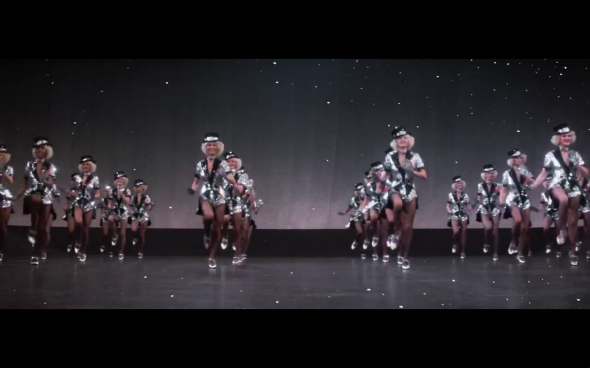 I’m all for anyone trying to put one of these into their movie.

Good for you, Spielberg. But I only accept sequins in monochrome. 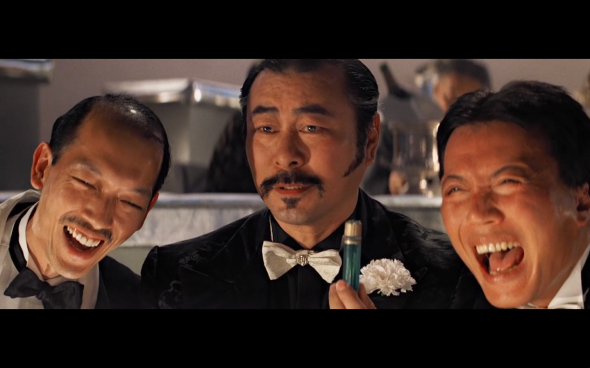 You have to laugh whenever you’ve successfully poisoned somebody.

Doesn’t the guy on the left look like the Siamese cat from The Aristocats? No? That’s racist? I agree. I wish I could be this guy in the middle more than I am, though. I one who gets to be playing the practical joke and knows something you don’t. I’m always Indiana Jones in this scenario. Poisoned and clueless. 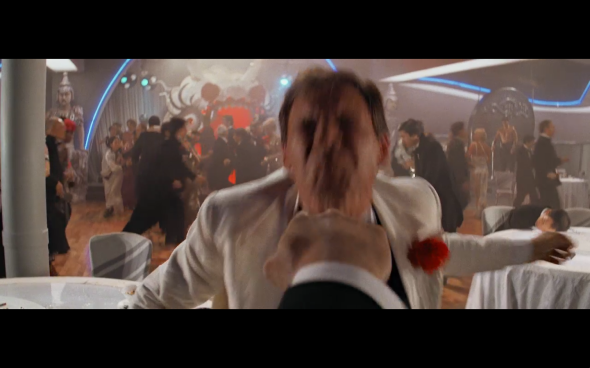 This is really the one major innovative shot in the film.

That’s an amazing shot choice. More fists coming out of the camera. I love POV in movies. Cause what if you started the movie POV and it goes for like 15 minutes and you don’t know what’s going on, and then there’s randomly a tentacle or something from the bottom of the screen? And the audience freaks out?

Or a POV movie and you realize it’s a zombie. 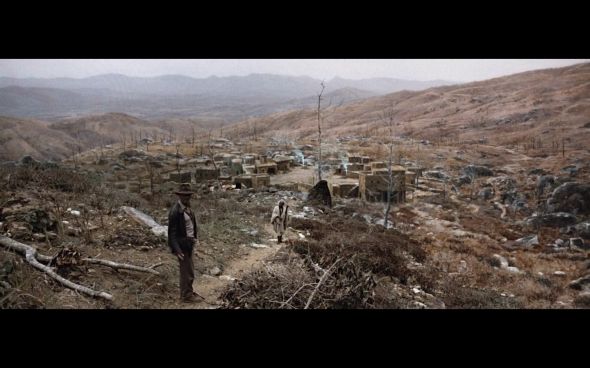 Wide shots of destruction are nice.

This also looks like something you put in your asshole photo album of vacation.

The Descent into Shitsville. It’s a wide shot, but it’s also just so desolate and monochrome. Like sequins, I only accept desolation in monochrome.

In terms of desolation, this one definitely passes the Smaug test.

It’s her hands that make it.

This is what they did in India before there was internet. Also, look at HER hands. 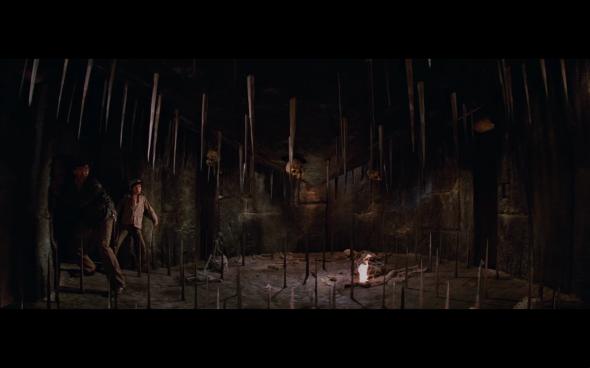 Another action movie shot. It’s just thrilling, the idea of spikes coming down and you have to figure out a way to stop it before you get impaled.

I love that this is an actual setpiece that they’re shooting from the side. You get to watch it, like a big mechanism. It’s like a diorama of death. And no bugs! 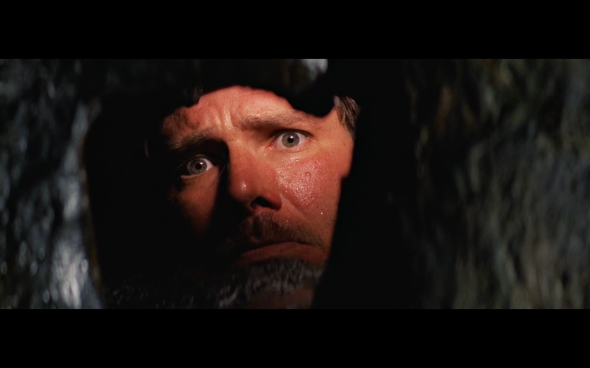 The first shot is so good. The way he just pops up into the hole and makes that face.

That actually is the one that should be the meme.

The second one is great because — we’ve all been there. That’s the only way to respond when someone almost gets you killed.

That first shot had me rolling. That also needs to be a meme. People peering through holes with that face. I really never appreciated the faces made in these movies until we did these articles. 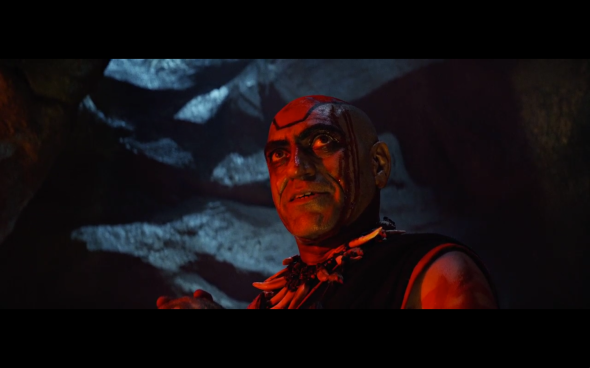 The blue and the red contrast is great. Plus, his evil faces make it all the better.

Just kidding, I appreciated SOME faces. I like him here because he doesn’t have the headdress thing on. This is what he looks like after hours, which makes him almost more sinister. There’s something sinister about a perfectly bald head with paint on it, am I right? Obviously, the main point of this shot is the color. The stone looks blue, he looks red…nobody of any age has any questions about whether or not this guy’s evil. Colorful lighting needs to be brought back. Seriously, someone do it.

The fake sky makes it look nice. I also like extreme angle shots. And what is clearly a model.

This looks like some shit out of Batman: Arkham Asylum. Bats, darkness, old building, low angle. 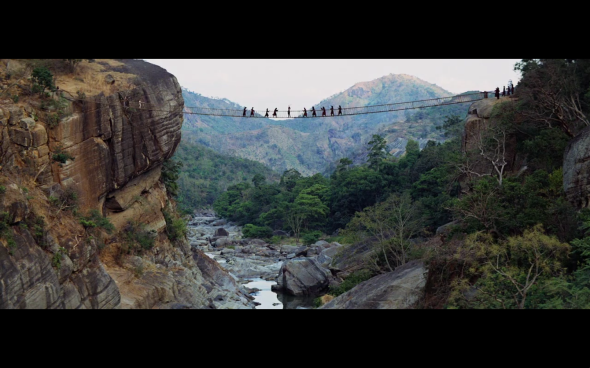 The first one is all about the wide shot and the symmetry.

I love the second one because it’s a practical effect to show the bridge is falling. It looks really nice, too.

These shots, I really liked, because the first one was wide and a y’all are surrounded shot, and the second one has the sand to show the action. That was so smart than just having the bridge break. You can see from the sand where the bridge was, and that contrast against the darker background gives us some perspective on the movement in the shot. Good work.

Tomorrow, we go over our final thoughts from the film.