The B+ Movie Guide: Part XIX

We’re going through the entire list, little by little, for posterity’s sake. And here’s the next set:

Another Kubrick classic. Spellbinding. This is one you discover really early when you get into film. Great stuff. (2)

This is up there for WWI films. It’s not All Quiet on the Western Front, but it’s got some of Grand Illusion to it. Kirk Douglas is a French colonel forced to lead a suicide mission. It doesn’t go off, so the callous generals responsible for the call decide to execute three men for cowardice. And Douglas was a defense attorney in his civilian life, so he defends them. War is hell, man. Don’t go to war.

What a trippy movie this was. I’m really not sure I understood all the finer points, because the history of the Middle Ages isn’t really my forte. But anyway, Max von Sydow (YEAH!) is a knight back to Sweden from the Crusades, and people have Black Plague, and he plays chess with death while traveling back to his castle with some people. The world is messed up. People die. Death is scary. All that. But it’s classic Bergman in its presentation, particularly the ending and its Danse Macabre. I watched it primarily for Max von Sydow, naturally. Can we believe he’s going to be in the new Star Wars movie? I’m excited.

THIS MOVIE. Burt Lancaster and Tony Curtis. One of the greatest films ever made. So dark, so cynical, so perfect. One of my favorite movies of all time, to boot. Not a wasted frame in this movie, and it’s just a sight to behold. (2)

Such a great movie. Such a great movie. Burt Lancaster plays a columnist and Tony Curtis is a press agent who needs his help. So Curtis basically gets blackmailed into breaking up Lancaster’s sister and her guitarist boyfriend. It’s not your typical Tony Curtis role up to this point, and Lancaster is brutal. I’m not really sure of what the reputation of this movie is, but I absolutely loved it — top ten percent of this list, easily. So if it’s a hidden gem, I hope this convinces you to watch it. If you’ve see it, you’ll know what I’m talking about.

Witness for the Prosecution (1957)

Two things going for this that make it a surefire movie you’re going to love. First: Billy Wilder. Second: trial movie. Trial movies are always interesting. Plus, Charles Laughton, Elsa Lanchester, Tyrone Power, Marlene Dietrich. This is not the first Billy Wilder movie people watch, but when you get to this, man, are you gonna realize you came into something good. (2)

I love Billy Wilder and I love trial movies. Correction: I REALLY love trial movies. Courtroom drama is one of my favorite subgenres, which I never really found out until I did the list. What a bunch of twists this had! First, you’ve got Charles Laughton as an old lawyer who’s sick and has nurses in his place to catch him whenever he’s sneaking booze or cigars and stuff, which is hilarious. Tyrone Power is accused of murder, and Laughton takes the case, in which Power’s wife (Dietrich) has to be the main witness. And that’s how it starts, and things go WAY off the rails from there.

I was talking to my grandfather about old movies once last year, and he was trying to remember these old movies he saw in theaters when they came out. At one point, he stopped, and was grasping for the name of one film he absolutely adored and hadn’t seen since.

“Tyrone Power. Charles Laughton, he was a lawyer…and Marlene Dietrich.”

“Witness for the Prosecution.”

He was smile was huge, because almost 60 years later, he could still remember walking out of this movie, blown away.

Foreign film. Also considered one of the greatest movies ever made. Coppola is a huge advocate for this movie. I also really loved this. I saw this in my intro class freshman year, and it was such an experience for me, I actually walked back to my room in a daze, so emotionally drained from the whole experience. It’s a terrific movie. (3)

This was majorly intense for long stretches, and also slow at times. By the end, you’ve come to appreciate both paces. The story follows Polish resistance fighters in the day following the Nazi surrender as they try to assassinate communist leaders. They have to deal with that, with potentially throwing their lives away, and with the allure of giving up the fight in favor of living under whatever system should come to power — after all, the Nazis have just been defeated. Every one of these questions plays out onscreen for the characters, but if you’re in the theater in 1958, you’ve got your own answers. So you watch it now, knowing what you now know (cause read a book, people), and you see this as a terrible, beautiful thought experiment that perfectly encapsulates that moment for these people.

Mike likes Liz Taylor here. I like her from Cleopatra. What’d you think I was going to say, National Velvet? C’mon people, get your heads out of the gutter. Great movie, anyway, pretty much all in this big, old plantation house. Big Daddy’s house, which — no, I didn’t go to Tyler Perry there, I went to Django Unchained. It’s another one of the old white people problems movies, and like many of those, it really works in the limited scope it’s in. Mostly you just get to take in Newman and Taylor performing the absolute hell out of these roles as though they were on stage.

Tony Curtis, Sidney Poitier. Chained together, on the run. A perfect movie, and huge historically, in terms of race and progressiveness about race in Hollywood. (3)

What a great day it is for Tony Curtis. These two in this movie are unreal, especially because there’s no reason they should be able to do what they’re doing. It’s a prison break movie and the two of them are chained up as they try to stay ahead of the posses out after them. At one point, they try to get up a muddy cliff face while chained together and you watch them fail for a good five minutes, knowing that the cops are out there and closing in. It’s the perfect way to force these two to be together for effectively the whole movie even though they start out hating each other on prejudice alone. It’s an incredibly progressive movie, it was a big milestone in Sidney Poitier’s career on his way to Guess Who’s Coming to Dinner and In the Heat of the Night, and it’s an entertaining film. 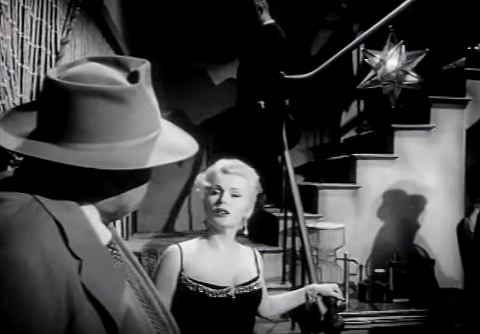 This doesn’t need an introduction. At least, past the opening tracking shot. This movie closed out the noir genre, essentially. They pretty much stopped making them after this, because the studio system era came to a close. After that, you started getting to the 60s, and runaway production and outdoor shooting. It’s also a perfect movie. (2)

The opening shot of this movie…well, watch it.

But seriously, we’re supposed to believe Charlton Heston as a Mexican?

I love that we don’t have to write anything here. This blog is supposed to be like a PSA for movies that you should see. In film terms, listing this here and saying anything about it is the equivalent of a reminder to breathe. I’m thinking, “Why am I even writing stuff?” and you’re thinking, “God, he wrote something for this.”

Tony Curtis, Kirk Douglas, Ernest Borgnine. It’s a Viking adventure film, and it is the epitome of great 50s filmmaking. Not essential by any stretch unless we’re talking, “Awsome movies you’ll love more than the random foreign films on this list.” This was one of those movies I put on knowing Colin was gonna love it. And how can anyone not love this movie? (3)

This movie made me so happy. I’m not at all ashamed to say, I bought beers to drink while watching it, and that was the correct choice. You want to have an amazing time? Get drinks and get ready to belly laugh between huge quaffs. Because that’s what they do in this movie. I can’t praise it highly enough. Yeah, it has great color and nice sets and everything, but…oh yeah, how about the scene where a drunken Kirk Douglas chops the braids off a woman’s head with hurled battle axes while she’s tied to a barrel? And how his father, played by Ernest Borgnine, is watching this while drinking from ram’s horns and eating meat, laughing his ass off and yelling, “What a son!” I can’t remember when I’ve seen a movie with a serious plot that had so much fun delivering it. No other movie has Ernest Borgnine jumping into a pit of wolves while yelling, “ODIN!”

Here’s the drinking game I came up with for this movie: anytime some awesome Viking stuff happens, drink as much as you want and yell “Odin.” Because that’s how they lived, too.

What can I even say about this? All ten are essential movies. My portion of this is actually way easier than I expected. There’s nothing I’d change here.

There are three I need to advocate for. The Sweet Smell of Success, Witness for the Prosecution, and The Vikings. I hadn’t seen any of these three before the list, and all three of them are super high up on my list of favorites now. If you want a hardcore New York drama, you’ve got The Sweet Smell of Success. If you want a courtroom movie with some humor and plenty of twists, Witness for the Prosecution never disappoints. And if you want to put on a movie and have the time of your life with booze, I really can’t think of many movies that top The Vikings. Seriously, I was grinning for most of the movie, and during the slower scenes that didn’t make me beam uncontrollably, it was simply a great 50s costume piece that didn’t involve the Mediterranean. A hidden gem, if I’ve ever seen one.

This entry was posted on July 26, 2015 by B+ Movie Blog. It was filed under Movies and was tagged with B+ Movie Guide, Film, Movies.