I’ll admit it’s more the scene that Sorkin wrote than the Costner performance in specific, but hey, any excuse to put Kevin Costner on a list. Plus, to me, a performance is a performance. Just because someone has great, can’t-miss material doesn’t mean they’re not also putting in the work to make it translate.

Costner’s always been one of those actors I love to watch who never really gets shown that much respect for his acting. He’s good, and people treat him like a movie star, but I’ve never gotten the sense that people respect the performances as much as they respect the star. And here, I think, he delivers some of his best work in years. He gets some smaller, early scenes, but it’s that scene in the park where he does ‘three years of therapy in three minutes’ that really is the weight of the performance. It’s the most emotional scene in the film, too, the moment where father and daughter mend their differences. And Costner does some really great stuff in underscoring the emotional weight of the moment without skimping on Sorkin’s words.

The rise of Bradley Cooper was swift. He became a known quantity from the first Hangover, but it was the doubling up of Silver Linings and this where we all knew he was for real. This performance in particular is quite something. Manic… I think is maybe the right word. The dude eager to get ahead at all costs, who ends up being conned by con artists and losing track of which way is up in his pursuit of an arrest. He gets some really great moments of insanity. Everyone will point to the scene where he beats up Louis C.K. and then humps him, but I like the other moments, him and Amy Adams, or the moments where he’s trying not to lose his shit, as the true measure of the performance. The film is basically David O. Russell letting his actors run wild with the characters, and it’s fun seeing which ones take full advantage of it. Cooper, I think, is at the top of that list.

It’s the epitome of a classy, classic supporting performance. Arguably he’s a co-lead with Firth, but I think he has enough time on the sidelines, when they focus on the castle and the king’s inner life, and the fact that he doesn’t show up until about a half hour into the film, that make him feel like a solid supporting part. Of course, the part of the unconventional speech therapist is ripe for a great performance, and Rush takes full advantage of it, giving you all the idiosyncrasies and fun moments in the early part of the film and then settling into the sturdy conscience of the film by the end. The ‘yes you do (have a voice)’ moment and his calmness when Firth gives the speech at the end — all around it’s just a great piece of work. And very measured, at that. Since Rush can be accused of being a ham on occasion, but I don’t think he gives into that side of himself at all in this one. Truly, if I’m gonna pick from this decade what feels like a banner type supporting performance, this would be one of the ones I pulled as an example.

First, I love Christopher Walken. But I feel like he’s (and a lot of this is by his own doing) settled into becoming a parody of himself. Part of that is the for-hire jobs he took in the 80s and 90s, and part of it is just who he is. So most of us grew up with him in these weird movies like Joe Dirt and Kangaroo Jack and The Rundown and then went back to see all the great work he did in other films. And only occasionally would he get a really nice dramatic part to show us why he’s the great actor he is. But those were becoming few and far between, especially this decade. This film, though — this one gives him the proper type of role you’d want to see. I suspect I’m in the minority on this performance, but I really loved what he did with it.

The film is about a famous string quartet who have been together for multiple decades, but now have to break up, because Walken, one of its members, announces that he has Parkinson’s. So he says he wants to play one more concert and then the group will go their separate ways. And we follow the fallout of all this, and all the hidden jealousies and rifts within the group that start bubbling to the surface because of the announcement. Walken in particular is the steady hand of the group, who acts as their conscience, in a way. He has some really nice moments, along with a fantastic monologue at the end of the film. I just really love seeing him in a role that’s not designed to play off the ‘Walken’ persona.

He is the point of the film, in a way. It’s his murder that starts the film and sets the entire plot in motion. He’s the one everyone is hunting, so the anticipation of meeting his character builds and builds until the moment he shows up on screen, which is actually quite sudden. But then, in the moments he actually has on screen, he really gives you a full picture of this character in quite a surprising way. You understand this dude completely by the way Brolin plays him. It’s quite an impression in such limited screen time.

This movie. This performance. You knew it was gonna be something from the beginning, when the trailers jokingly said, “And introducing Daniel Craig as Joe Bang!!” But the blonde hair, and that accent — you knew he was going full out with this one. And man, does it work. I feel like most of the work Craig has done between the Bond films of this decade have made it on these lists. He’s a really underrated actor. But here in particular, he gets that type of scene-stealing role, even from the very first moment, making them buy him hard-boiled eggs and the way he delivers the line, “I am in-car-cer-a-ted.” But it’s literally every scene with him — that accent, and the way he’s legitimately intelligent to boot. You have both “We are dealing with science here!” and also him writing down the chemical reaction formula on the wall for the other two to explain just what the hell he’s doing. It’s great stuff. Truly one of the most underrated performances of this decade.

I love when Tom Hardy gets to be weird. You get great shit. Here in particular — at first he’s just the weird side dude to DiCaprio, muttering about ‘pelts’ every ten seconds. But then once Leo gets attacked by the bear, the film splinters off between the two of them. You get Hardy being a coward and selfish, leaving Leo for dead. And then you get those great moments as he’s traveling back with Will Poulter, giving monologues about a guy who thought God was a squirrel. It’s such great stuff. You’re not really sure why you’re so invested in this dude and then you realize — Tom Hardy’s just that fucking good. And, he does make this guy into a proper villain you want to see get his comeuppance at the end.

33. Christopher Plummer, All the Money in the World

There was a lot said about this performance even before anyone saw it — the role, of course, was played by Kevin Spacey, and then about two months before the film came out, all the allegations dropped and Ridley Scott and the studio decided to pull him from the film and recast it with Plummer (who, I think we’d all say, was a better choice for the role to begin with, but that’s beside the point). But I think most people’s interaction with the film stopped there. I’m not sure most people actually bothered to see the performance. I’m assuming they reshot everything as it was on the page/in the earlier versions, but I don’t know for sure. Either way, I love the way he portrays Getty. A man so determined in his pursuit of money and legacy, but with a soft spot for his grandson. He makes this character Shakespearean. All he cares about is wealth, and ultimately it’s his downfall. He loves his grandson, and it’s his inability to overcome his desire for wealth that leads to him letting the boy down. It’s a tremendous piece of work that, while it was nominated for an Oscar and was very acclaimed, I’m not quite sure people actually bothered to see it and see it for what it is. 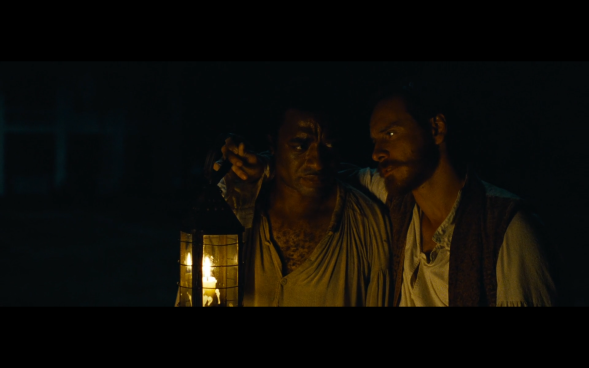 If the world didn’t know how great Michael Fassbender was before this movie, they certainly knew afterward. How evil and sadistic is this character? How menacing is he? It’s so great. It almost seems quaint, this performance, given how many other great ones he gave around it this decade, but this one in particular — it’s truly one of his best.

31. Michael Stuhlbarg, Call Me By Your Name

This entry was posted on April 2, 2020 by B+ Movie Blog. It was filed under Movies and was tagged with 2010-2019, Favorite Male Supporting Performances of the Decade, Film, Movies, Top Ten, Top Tens of the Decade.