Gandolfini has always been criminally underrated as a character actor, but no performance of his is as criminally underseen as this one. It’s a film by David Chase (yes, creator of the Sopranos) about a kid growing up in New Jersey who wants to be a rock star. And Gandolfini plays his father, who fought in World War II, had a very straightforward kinda life — got married, had kids, fought for his country, worked in a factory — that’s what he knows. So the idea that his son has long hair and want to do this is just completely foreign to him. It’s that dad character everyone can understand. You get it immediately, when he says, “All that money in college and you can’t afford a haircut?” or something like that. And you just understand this guy completely. The guy who is very vocal about what he feels but very protective of what he’s actually thinking. And you have these really nice moments where he lets you inside — he and his son have a dinner together and you really get to see his inner feelings and struggles and the things he never lets on to anyone. And there’s a great moment at the end when his son is leaving to go ‘make it’ that really sums up everything about the character you need to know. I really love this performance a lot and I really think it was good enough to have been nominated for awards this year if only anyone bothered to pay attention to Gandolfini’s work before we lost him. 29. Chris Cooper, A Beautiful Day in the Neighborhood

It’s gonna be a twofer for this movie. Everyone knows about the other one, but this is the performance from the film that got criminally overlooked. I saw it within two scenes of Cooper being on the screen. And this is almost completely before Rogers/Hanks shows up. You just go, “Oh my god, this is really good, and no one’s gonna talk about it.” The film is largely about Matthew Rhys’ character and his relationship with his father, played by Cooper. You hear about it briefly, and the minute Cooper shows up at the wedding, drunk, with a new wife and going up to make a speech and sing a sing despite not being asked to, you completely understand everything about the character and how he and his son got to this point in their lives. And then you have those scenes of him trying to make amends, and it’s just really touching to see him try to get back into his son’s life. You really feel the regret there. I almost wish there were slightly more in the film for his character, just so maybe more people will give this performance the respect it deserves, but honestly I’m not even sure that would have mattered.

28. Tom Hanks, A Beautiful Day in the Neighborhood

It’s Tom Hanks playing Mr. Rogers. One of the few people who could have played him and gotten away with it. There was only downside here for him. If (somehow) it didn’t work out, he’d have been blamed for not being the right fit. And at best, when he gave the great performance he did, really people just go, “Well yeah, of course.” But truly, apart from this obviously being one of those performances that makes a list like this (like when Morgan Freeman played Nelson Mandela), I was very impressed by how well he handled some of those scenes, not trying to do an impersonation of Mr. Rogers but rather playing to the character of the man and the emotion of the scene. I love the scene when Rhys is needling him and sort of hits the target of some painful memories of his, but he manages to flow right through it. It’s simultaneously both an ‘obvious’ great performance and a supremely underrated one. 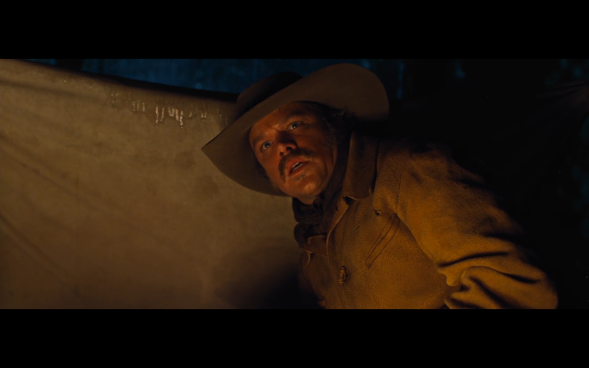 He’s so goddamn funny in this movie. Bridges and Steinfeld get all the notice, but Damon’s the third part of that portion of the film (which is the majority of the film), and steals most of the scenes he’s in. He’s the perfect foil to both Cogburn and Mattie, the smug Texas Ranger constantly bragging about how the ‘rangers’ do things. Damon builds the character to the point where everything he does is just funny. Even when he bites his tongue off… he still talks, and that becomes a joke. Even at the end, his character gets hit over the head with a rock, and somehow it’s hilarious too. He’s just a buffoon of a character, who also proves his worth by the end of the film as well. But really, it’s the fact that he’s just this comical foil to the other characters that really makes this character wonderful. This might be Ruffalo’s best piece of work. It’s just a stunning performance. He communicates so much through body language and movement. From the opening scene, when him and Tatum are sparring, you get, without a single word being spoken, the relationship and temperaments of the two brothers. There’s just an innate goodness to Ruffalo in this film, and it’s that looseness and comfort in his own skin that perfectly illustrates why Tatum’s character always feels like he’s overshadowed by him. Tatum is trying really hard, and for Ruffalo, it just comes natural. It’s really a beautiful, tender performance.

I think what I loved most about this was that it was the first time I felt that De Niro had a role befitting of his stature as an actor since… I mean… since, that’s the word, right? Since what? Probably since the 2000s started. That’s for sure. He had a couple of good performances, but none of them ever felt like the type of role this is. Here, he gets a real character that feels different to the ones he’d played before. Aspiring restauranteur turned bookmaker with OCD who is just trying to make sure his son is okay. He’s got some great moments throughout the film, mainly him yelling at Cooper or Lawrence, but it’s the moment at the end when he gets his big ‘you gotta go after her, because you’re gonna regret it forever if you don’t’ that really drives everything home with this character. You get the sense that he understands what he’s talking about, and this is the one time where he really wants his son to know — “You have to listen to me. I want you to be okay, and I want you to be happy. And this is your chance at that.” He really does an incredible job with this, and it’s really nice when Robert De Niro gets a proper role.

It was so great seeing him in this, because it felt like years since I’d seen Edward Norton in something. I mean, intellectually I knew he’d done supporting parts in some Wes Anderson stuff and was in that shitty Bourne spinoff, but it felt like the first time we got to see the actor Edward Norton in a while, which was great. And also, he’s just so fucking good in this movie. The pretentious, neurotic actor who is really good but comes with his own quirks. He’s got some really fantastic moments in this movie and reminds us all what happens when he has great material to work with.

If you’re compiling the most famous lines from this decade (and this one has a legitimate shot at all-time status), “Look at me — I’m the captain now” is on that list, if not in the top five, if not #1. This was Barkad Abdi’s first screen performance, and holy shit, what an impression, right? You totally buy this guy, to the point where it’s been hard for him to seemingly get work as something other than a Somali pirate in the ensuing years. He’s so goddamn convincing, and so captivating. Sometimes you need someone who isn’t burdened by having done it before to give the most authentic performance. It’s hard to make a list of performances like this and not rank this one high, since this is one of the most memorable pieces of work of the entire decade. Another performance that is just breathtaking. From the minute he bursts on to the screen he is the most captivating thing on it for the entire time he’s there. And that’s the purpose of the character. Tilda Swinton and Matthias Schoenaerts are trying to have a quiet, relaxing vacation, and here comes Fiennes, her ex-husband, to ruin it. And he has to be in contrast to what they want, which is boisterous and charismatic. The scene where he dances to “Emotional Rescue” is the best moment in the entire film. It’s just an incredible scene and part of an incredible performance that ranks among the best of Fienne’s career.

This entry was posted on April 3, 2020 by B+ Movie Blog. It was filed under Movies and was tagged with 2010-2019, Favorite Male Supporting Performances of the Decade, Film, Movies, Top Ten, Top Tens of the Decade.