You know that secret list everyone has of films they haven’t seen? Not the list they tell everyone about. I’m talking the one that you don’t ever mention, because no one would ever guess that you hadn’t seen those movies, and it would be really embarrassing if they did. I’m talking the really big stuff. Of course, what constitutes “big” depends on how deep you are into movies. At my level, there isn’t much. Believe me. I tried.

The impetus for this article came when, yesterday, for the first time, I watched Rashomon. For some reason, I made it almost 24 years without seeing it. For someone like me, having seen all the movies I’ve seen, no one would even think to guess that I haven’t seen Rashomon. And that was my big secret. Of course, Rashomon is one of those films where, even if you haven’t seen it, you’ve seen it. Everyone knows the plot of the film because it’s been repeated so often. But I’d never actually sat down to watch the film. And that’s what counts. Kind of like how, last year, until I saw it for the Quest, I’d never actually watched Rear Window. Weird, right?

And we all have that list. That “dirty little secret” list. The films that you’re so embarrassed you haven’t seen, if you even see the title of the film in print, you get paranoid. “Is my face turning red? They’re gonna know. They know I haven’t seen it.” And god help you if it comes up in conversation. You have to stay deathly silent. But not silent enough so as to make it obvious. Because you can live with your friends knowing you haven’t seen Schindler’s List. But telling them you haven’t seen The Dark Knight — out of the question. They’d look at you sideways. “How the hell did you manage to make it this far without having seen that?”

So, in the interest of getting things out in the open, I’m going to give you my list of films that you’d think I’d have seen by now, but in reality, I haven’t. END_OF_DOCUMENT_TOKEN_TO_BE_REPLACED

Oh, I hate having to talk about this year. This is one of the most contentious Best Picture choices of all time. It really is. Everyone has an opinion.

Generally considered one of the strongest Best Picture categories ever — Rocky takes the win. Fortunately, the film has become iconic, so the win doesn’t look as bad as something like Chariots of Fire does. It also wins Best Director for John G. Avildsen (talked about here). That actually helped the decision seem stronger, since it helps when they show it more support than just the Picture win. Best Actor was Peter Finch for Network (talked about here), and while he was more of a strong supporting role in the film, he was actually a good decision, since William Holden had an Oscar already and De Niro would win his later. Faye Dunaway also won Best Actress for the film (talked about here), which actually was a great decision, since she was so overdue by this point. And Beatrice Straight won Best Supporting Actress for the film (talked about here), after giving a 5 1/2 minute performance. I don’t really think she should have won, but hey — Jodie certainly came out okay from it. And Jason Robards won Best Supporting Actor for All the President’s Men (talked about here), which was an amazing decision. He’s so good in that.

Now, let me say — there’s a lot of contention here. And everyone is entitled to their opinion. I see why Rocky is considered a “lesser” film to at least three of the other nominees. But, honestly — I love the film so much, and knowing that it won — it actually makes it a lot easier for me to vote for it, guilt-free. I probably could have said that for any one of four films if they had won this category. In a year like this, I personally just marvel at the films rather than quibble about what should have won.

All the President’s Men (Warner Bros.)

Pic of the Day: “Would you mind opening the window?” “Now don’t go getting any ideas, Miss Kubelik.” “I just want some fresh air.” “It’s only one story down. The best you can do is break a leg.” “So they’ll shoot me – like a horse.” “Please, Miss Kubelik, you got to promise me you won’t do anything foolish.” “Who’d care?” “I would.” “Why can’t I ever fall in love with someone nice like you?” 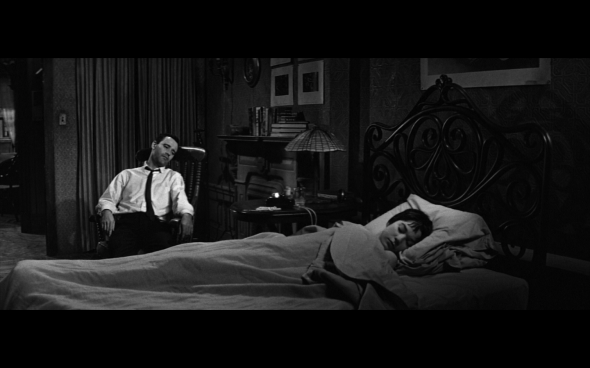