Fun with Franchises: Favorite Images from Harry Potter and the Chamber of Secrets

What we usually do is, just how we watch the films, Colin and I go in separately and pick out about ten to fifteen shots that we really liked. Then we compare lists, and whichever ones we both picked automatically go on our final list. And everything else we talk through and discuss why we like them, and eventually we’re left with a final list of ten images we liked the best, along with five honorable mentions, which were also as good, but just missed out on making the list proper.

That said — here are our favorite images from Harry Potter and the Chamber of Secrets: 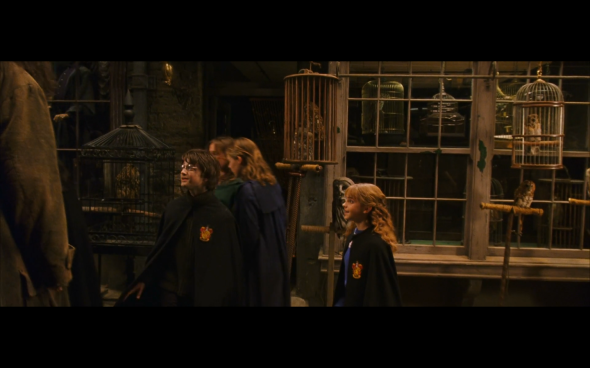 This one is a tie because when Colin and I compared our lists, we both included this scene and shots that were within two of one another. So I felt a split was in order. Colin will explain his choice of the Hagrid face, which is hilarious on its own. My choice was what he was reacting to, which is even funnier to me, and topped off by the face he makes. But my choice, as I said in the article — was the second image, which, if you look at it, is exactly what it’s like when you’re hanging out with someone at a party, and clearly you both want to go home with one another, but it’s kind of awkward, because you’re in public, and you have someone else there, and you clearly want your third wheel friend to go so you two can get intimate. And then Hagrid makes the face and is like, “Well, I’ll be going,” and they basically jump at, “Yeah, yeah, that’s a good idea, see ya!” and it’s so obvious they want him gone. This shot never fails to make me laugh because of that.

I pretty much had to choose this picture of Hagrid looking like a creep. If you’ve seen Black Dynamite, you know the stare that this reminds me of (“I’ll send you back to Crenshaw Pete, wit his hot-ass coat hangers! Wouldja like that, bitch?!”) so there was much jubilation when I saw Robbie Coltrane making this face. It’s one of those faces that could be a meme.

I think all I have to say about this one is — look at it.

This is another perfect face. She gets so surprised at seeing Harry that she freezes up. In our article, I likened Ginny to a wild Pokemon encountered in the Safari Zone. She appears, gets freaked out, and runs. I know he’s gonna sleep with this later, but right now, we’re still at that startled woodland creature stage of the relationship.

(What’s great is that this scene is a direct contrast to a moment in Half-Blood Prince, too.)

Colin and I both wrote the same comment for this one: 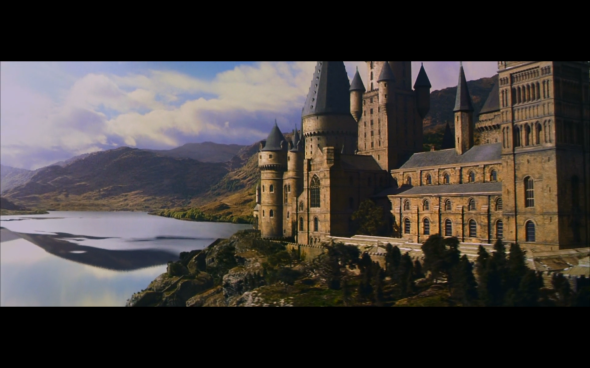 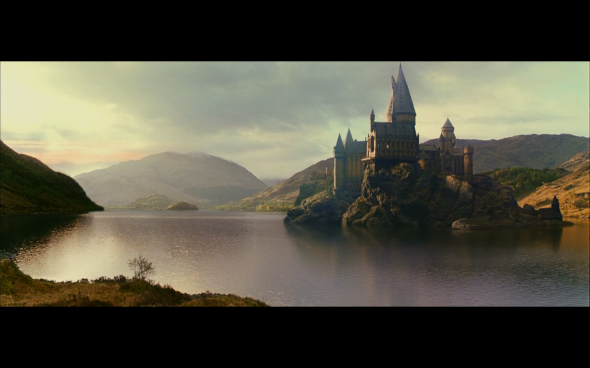 This is another one Colin and I both basically agreed upon. The exteriors of Hogwarts in these films are gorgeous. Colin chose the first shot of Hogwarts from the back, whereas I chose what I think is the only shot of the school from this particular angle. I feel like either we get it up close or really far away, but not exactly like this. And I really like that, and felt it was worth pointing out.

Plus this also allows us to skip these shots in the future unless they really stand out, because we pretty much know what we’re getting with a Hogwarts exterior — beauty.

(Also, shout out to this image as well. Another image you don’t really see anywhere else in the franchise, quite like they did it here.)

These shots are absolutely gorgeous. How badly do you want to go to this school, or even a school that only looks like it? I chose the closer shot because I like the detail, but the wide shot is even prettier. I never got tired of them establishing the setting like 17 times every film because it always looked like this.

Nothing like an indignant black kid. Mike and I didn’t have a lot of match-ups in the screenshots that we chose for this one, but this one was an overlap between our lists because out of hundreds and hundreds of individual shots…this. Whatever is going on in this scene, you know Scatman ain’t about that life.

Due to personal restrictions, I am still unable to comment about this photo. 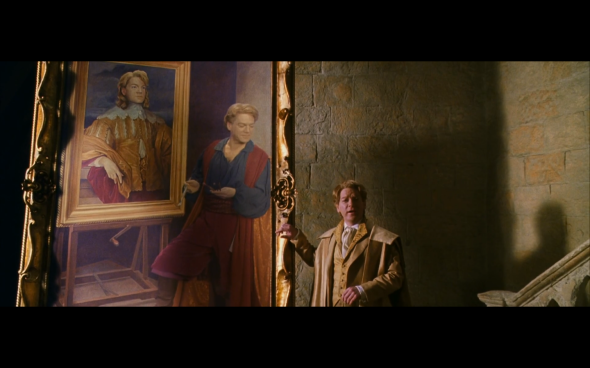 This is one of the most blatantly egotistical displays I’ve ever seen, and it’s amazing. The man has a portrait of himself painting himself that he stands next to. The best part is that for all the debates and questions we have surrounding how magical paintings work and what they’re capable of doing, you know that this one just chills and paints himself. Nothing else.

The painting of him is looking at him as he talks about himself. This is brilliant. I wish I’d come up with the idea, because I’d totally have done this.

If this face does not automatically make you laugh, then I don’t know what to tell you.

Filch faces are always winners. Look at this filthy squib.

8. Snowing in the Great Hall.

You can’t not enjoy this, because the Great Hall always looks good, and because enchanted snow falling indoors is awesome. I also relish the fact that these Christmas trees were almost certainly decorated by Filius Flitwick, the baddest motherfucker at Hogwarts.

Question, though — we have ethnic minorities everywhere, but what about religious minorities? Are the Patil twins Christian? Does the wizarding community even DO Christianity? I wouldn’t expect, after all those instances of burning and stuff. You have to wonder why there’s so much Christianity around all the time, but then again, this shot looks good, so whatever.

Honestly, I didn’t think past — it’s snowing indoors, that’s terrific. This is everything my child-like imagination wants to see.

Also, I’m glad religion isn’t around to fuck up the wizarding world.

I just love this shot for the reflection. Reflection is one of those things — like rear projection for Mike — that usually gets me going. A bit of water on the floor like this is great for making a surface look glassy without you having to nuke it first.

This is just a nice shot. It’s memorable. I almost picked it for my list, only I felt I had way too many “I can’t feel my legs” shots that could come up later on after this movie.

10. The Chamber of Secrets

This is Harry Potter and the Chamber of Secrets. But really why I have it here is because there’s a lot of symmetry, and it’s just a beautiful image. Again, just look at it — that’s why it’s here.

I’m so getting a place like this when I move next. Symmetrical, drippy, snake-ridden and all this stuff. What more could you want out of a bachelor pad? I know Salazar Slytherin was a chill guy, so I’m assuming there’s a bar around here somewhere. Then again, you can’t be positive, cause a lot of evil people are too bent on evil to get around to drinking. I hope there’s a bar.

And here are five honorable mentions, of shots we enjoy, but ones that didn’t make the official cut. 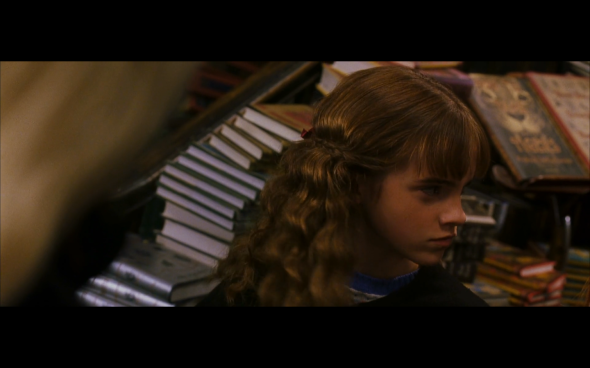 If Hermione gives you this look, you run. Mike and I both love a canted angle, so when you get one in a shot of Hermione making a badass face, it’s hard to pass up.

I like this image for so many reasons — canted angle for one. I like that the camera is tilted one way and her head is tilted another. Also — the look. The shot itself is just great. Lucius makes a crack about her parents, then we cut to this shot, she looks over where she is in the photo above, then we cut to her parents, presumably (which — we had a lot to say about that in the article), and then she looks back to Lucius when we cut back. It’s one of the most interesting sets of shots in the franchise. I had to mention it.

I will always call out a Third Man shot. Always.

Mike has a good reason for liking and choosing these images. Since I watch shit that he tells me to watch, I also appreciate these visual cues. Gotta wonder if they’re intentional.

Myrtle is a pretty kinky character all around. How many shots do we have of her that can imply something dirty? It’s a lot. This is the one that’s really, just….look at her. She’s getting a little hands-on experience. 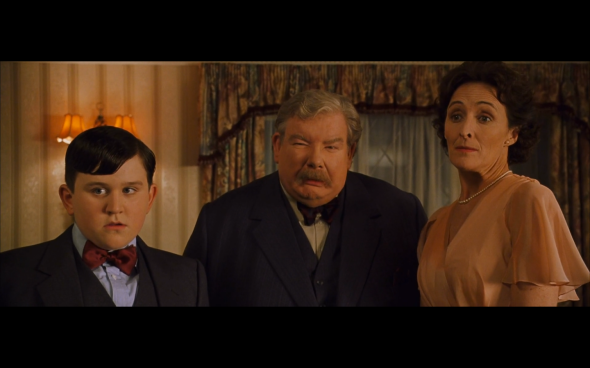 I enjoy them all glaring at him. They really are a unit — you get the feeling that if anything, Harry’s becoming a wizard has brought the Dursleys closer together. United in their hatred (or fear) of him. But look at their faces! They got these parts cast just right.

Their facial reactions are just right.

So those are our favorite images. Tomorrow, we will discuss our final thoughts about the film.