Film scores are one of my favorite things to listen to and the list of my top ones is one of the articles I get most excited for each year. I put way much more effort into that than I really ought to. I go deep, listening to some scores that I probably shouldn’t even bother with. And it’s because I love that aspect of film so much. The care that goes into all those notes. Think about how many films there are each year and how many have true, dedicated scores to them. Now consider that, despite there only being a handful of notes out there, each of them is utterly unique in its own way. It’s crazy to think about.

So when I was considering lists to talk about for this past decade, this one was one I couldn’t wait to get into. I know most people won’t rush to put a score on, but if you’re gonna go in for one, these are some of the best that have come out these past ten years: END_OF_DOCUMENT_TOKEN_TO_BE_REPLACED

Mike’s Favorite Original Songs of the Decade: #99 – “When a Cowboy Trades His Spurs for Wings,” from The Ballad of Buster Scruggs

99. “When a Cowboy Trades His Spurs for Wings,” from The Ballad of Buster Scruggs

Ah, yes. The Ballad of Buster Scruggs. Sneaky choice, I know. But also… how many more memorable songs out there are there than this one? You start this movie that you thought was gonna be a miniseries but instead becomes an anthology film, and then here we are with this opening segment that’s just hilarious. And then all of a sudden, after a shootout, this dude just starts singing. And it’s completely ridiculous and hilarious. But then the movie goes all in on the song, which makes the whole thing even better. The beautiful thing about this song is how completely straight the whole thing is played, even though they’re dragging one guy’s corpse out of the street as his soul floats away into heaven, singing this song. It’s incredible.

Pic of the Day: “Playing music is supposed to be fun. It’s about heart, it’s about feelings, moving people, and something beautiful, and it’s not about notes on a page. I can teach you notes on a page, I can’t teach you that other stuff.” (25th Anniversary) 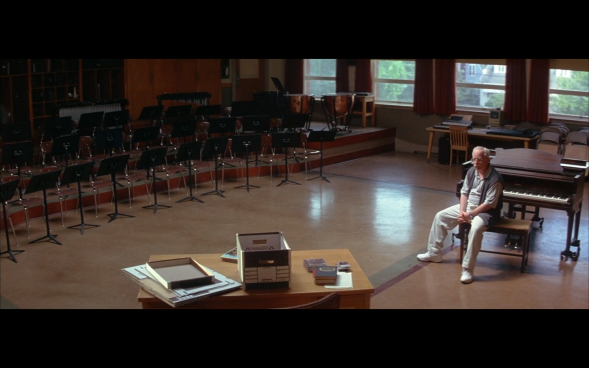