I love 1960. Mostly because The Apartment, one of my favorite films of all time (top five, even), wins Best Picture and Best Director for Billy Wilder (talked about here). I love both decisions, even though Hitchcock probably should have won Best Director for Psycho.

And then we have this category, which — there was no way any other decision was gonna happen.

Pic of the Day: “You can’t see it, can you, Charlie? I mean, you’ve never been able to see it. I came after him. And I’m gonna get him. I’m goin’ with him all the way. The pool game is not over until Minnesota Fats says it’s over. Is it over, Fats?” 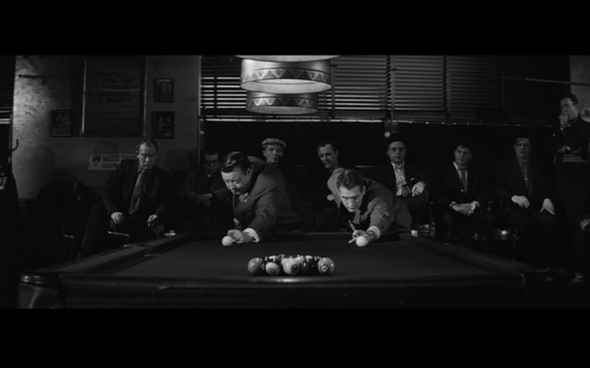 I don’t even know what opened. Seriously. I have to go back and look. That’s a first.

Act of Valor — oh yeah — opened to a strong $24.5 million. Because America is dumb and fetishizes soldiers. I hear the film is nothing more than a concept and has no story to tell of whatsoever. That’s about what I expected. But good for them, I guess. They opened to double their production budget, so that’s nice. At least they didn’t spend much. (Could have at least tried to write a decent story, though.)

Tyler Perry’s Good Deeds opened to (wow) $15.6 million. That seems a bit low for Tyler Perry. But honestly, it doesn’t matter. He wins no matter what, so it’s fine. You know what you’re getting, he doesn’t spend much, he makes money. Doesn’t matter. (I do want to see if that theorem holds up, though. By the rule I invented, this film will finish with somewhere between $30-33 million. I’ll keep you posted how it does.)

Journey 2: Mysterious Island is showing remarkable life at the box office (or maybe it’s just another one of those kids things. Gnomeo and Juliet did the same exact thing last year), dropping only 32% and finishing with $13.4 million. It has just about made its budget back domestically. That’s nice. It was harmless. END_OF_DOCUMENT_TOKEN_TO_BE_REPLACED