What a perfect film moment this song is. You’re watching this movie, and Oscar Isaac is singing folk songs, and then he comes in to do a studio bit with Timberlake and Driver and you’re thinking, “Okay, it’s more of that.” But no, it’s this. A novelty song. And it’s just perfectly written. Adam Driver’s vocals on this are just wonderful. I actually memorized just his part to the song after it came out, just because I loved it so much. But it’s a great moment, because you just see them performing this, and it’s both catchy and also funny (because of Driver) and you see Isaac’s character perfect in this moment — he helps with the song, makes it better, performs it well, and then is like, “This is shit and it’ll never make money.” All around one of the most memorable music moments of the entire decade.

Pic of the Day: “How can you talk like this? Your gun has got you everything you have. Isn’t that true? Hmm? Well, isn’t that true?” “Yeah, sure. Everything. After awhile you can call bartenders and faro dealers by their first name – maybe two hundred of ’em! Rented rooms you live in – five hundred! Meals you eat in hash houses – a thousand! Home – none! Wife – none! Kids… none! Prospects – zero. Suppose I left anything out?” “Places you’re tied down to – none. People with a hold on you – none. Men you step aside for – none.” “Insults swallowed – none. Enemies – none.” “No enemies?” “Alive.” “Well. This is the kind of arithmetic I like.” “Yeah. So did I at your age.” (60th Anniversary) 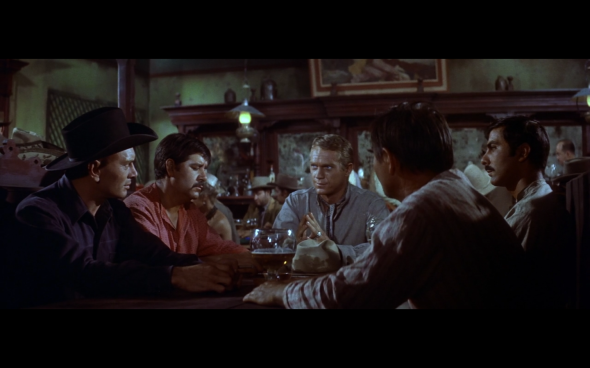