Take my breath away END_OF_DOCUMENT_TOKEN_TO_BE_REPLACED

Pic of the Day: “I feel the need… the need for speed!”

A Pictorial History of the Movies: 1985 – Back to the Future

Has to be. Can’t be anything else.

Highest grossing movie of 1985. Cultural touchstone for a lot of people. Completely has held up over the years. Endlessly quotable with dozens of memorable images.

There is no other choice besides this one.

But wouldn’t it have been real fucked up if I picked Cocoon? END_OF_DOCUMENT_TOKEN_TO_BE_REPLACED

Pic of the Day: “If my calculations are correct, when this baby hits 88 miles per hour… you’re gonna see some serious shit.”

A Pictorial History of the Movies: 1984 – Ghostbusters

This was the second highest grossing movie of 1984. $230 million. Behind only Beverly Hills Cop.

It made more money than Temple of Doom.

The song was a number one hit for almost a month.

Pic of the Day: “Let’s show this prehistoric bitch how we do things downtown.”

A Pictorial History of the Movies: 1983 – Flashdance

This was one of the last three years I had to choose for this list. 1983 was really difficult for me. Because the biggest film of the year was Return of the Jedi. And we already talked Star Wars. Then you have Terms of Endearment, which is a great weepy, but didn’t feel like a slam-dunk choice for the year. Then there’s Scarface, which is culturally big, and does represent the 80s in a lot of ways, but felt like too easy a choice. Plus it was more a film that got rediscovered later. Then I thought maybe A Christmas Story, but that doesn’t feel like the right choice either. So I left it alone for a while and went back to it at the very last minute, when I wanted to have everything finalized.

Finally, I went back and looked, and discovered two films that instantly became the two finalists for this year, that represented what was popular in film in the 80s, what was going on culturally in the 80s, and still holds up as something that represents where film was at in 1983. And those two were Flashdance and Risky Business.

Now, both have very iconic images and moments, and very memorable soundtracks. So it was tough to narrow down. I had Risky Business as the choice for a while. But then I looked at what the biggest music hits of 1983 were, and this movie had two of them. “Flashdance… What a Feeling” and “Maniac” are two of the staple hits of the 80s. They felt present, as opposed to the throwback song of Risky Business. Plus, this was the third-highest grossing movie of the year, whereas Risky Business was 10th. So this was an overall bigger hit, and won an Oscar for Original Song. It felt like all around the best choice. END_OF_DOCUMENT_TOKEN_TO_BE_REPLACED

Pic of the Day: ♫ “What a feeling / Being’s believing / I can have it all / Now I’m dancing for my life. / Take your passion / And make it happen / Pictures come alive / You can dance right through your life.” ♫

A Pictorial History of the Movies: 1982 – E.T. the Extra-Terrestrial

I tried really hard not to go Spielberg-centric, but the man actually has managed to have his films be the most representative film of their respective years a bunch of times.

It’s really hard to argue when films become critically, commercially, and culturally successful as his have.

And, at this point, with us being almost to the home stretch, I’m not going to fight it.

I can understand someone going Tootsie here. I can even understand An Officer and a Gentleman. Blade Runner, I’d say is a bad choice. Because Blade Runner was considered a giant failure when it came out. And to this day, there are still too many cuts of that movie. So I can’t see how it can represent a year. I can definitely see someone making a case for Porky’s or Fast Times at Ridgemont High. Maybe even 48 Hours.

But… when you get back to E.T., I don’t see how that’s automatically the choice. END_OF_DOCUMENT_TOKEN_TO_BE_REPLACED

A Pictorial History of the Movies: 1981 – Raiders of the Lost Ark

It’s Raiders. It can’t really be anything other than Raiders for 1981.

To run down my alternatives, briefly… On Golden Pond is a big movie of the year, but… Raiders. Chariots of Fire? No. Reds? No. Arthur? I’d love it, but no. Clash of the Titans? No. Escape from New York? Possibly, but I don’t see it. Mommie Dearest, I feel, actually becomes a strong contender for this. But not over Raiders.

I honestly can’t see anything that you can possibly say deserves the title of “Film Most Representative of 1982” than Raiders of the Lost Ark.

Unless you want to say Zorro, the Gay Blade. In which case, I’m willing to listen. END_OF_DOCUMENT_TOKEN_TO_BE_REPLACED 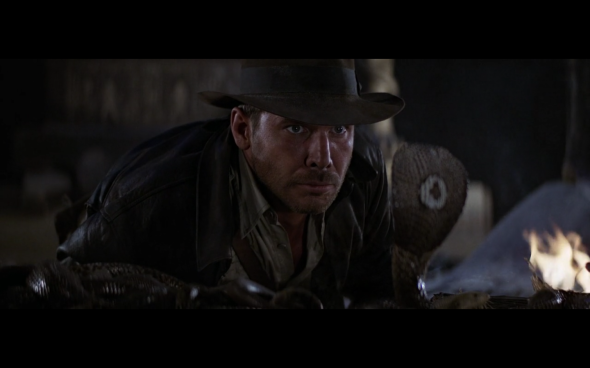 A Pictorial History of the Movies: 1980 – Raging Bull

The biggest movie of 1980 was Empire. That wasn’t gonna be the choice. So, I pretty much just let class win out.

Because this is Raging Bull. This is considered one of the greatest 100 movies ever made.

It is one of the greatest movies ever made. It’s a perfect film.

Sometimes you just have to let greatness win. END_OF_DOCUMENT_TOKEN_TO_BE_REPLACED

A Pictorial History of the Movies: 1979 – Apocalypse Now

Kramer vs. Kramer was technically the highest-grossing movie of 1979.

And it’s the film that won all the Oscars.

But fuck that. This is Apocalypse Now.

END_OF_DOCUMENT_TOKEN_TO_BE_REPLACED

Pic of the Day: “You smell that?” “What?” “Napalm, son. Nothing else in the world smells like that. I love the smell of napalm in the morning. You know, one time we had a hill bombed, for 12 hours. When it was all over, I walked up. We didn’t find one of ‘em, not one stinkin’ dink body. The smell, you know, that gasoline smell, the whole hill. Smelled like – victory. Someday this war’s gonna end…”

A Pictorial History of the Movies: 1978 – Halloween

This one took a left turn that even I wasn’t expecting. Because the film that made all the money this year was Superman. But that didn’t feel like the right choice. And Deer Hunter and Coming Home won all the Oscars. And they didn’t feel like the right choices either. Deer Hunter felt okay, but it felt okay just because it won Best Picture. It didn’t really feel like a film that encapsulated its year. Grease also made a lot of money, but I don’t know if that pinpoints itself to any particular year so much as it’s just Grease.

Animal House was something I considered for a second as well. But then I saw this, and I saw Dawn of the Dead. And I felt like both of these, more so this one, were both critical in reestablishing the horror genre for the future. There was a giant horror boom in the 80s, and it’s because of films like this.

This movie essentially gave birth to the slasher genre. END_OF_DOCUMENT_TOKEN_TO_BE_REPLACED

Pic of the Day: “I met him, fifteen years ago; I was told there was nothing left; no reason, no conscience, no understanding; and even the most rudimentary sense of life or death, of good or evil, right or wrong. I met this six-year-old child, with this blank, pale, emotionless face, and the blackest eyes… the devil’s eyes. I spent eight years trying to reach him, and then another seven trying to keep him locked up because I realized that what was living behind that boy’s eyes was purely and simply… evil.”

A Pictorial History of the Movies: 1977 – Star Wars

Pic of the Day: “A long time ago in a galaxy far, far away…”

A Pictorial History of the Movies: 1976 – All the President’s Men

1976 is one of those years that everybody knows that’s notoriously difficult to choose from. There are at least five amazing and iconic films from this year, and just picking a favorite is a daunting task, let alone which one represents its year.

Leaving alone all the other choices from the year there are five choices: All the President’s Men, Network, The Outlaw Josey Wales, Rocky and Taxi Driver. How the fuck do you choose from those?

Here’s how I did it. END_OF_DOCUMENT_TOKEN_TO_BE_REPLACED

Pic of the Day: “You know the results of the latest Gallup Poll? Half the country never even heard of the word Watergate. Nobody gives a shit. You guys are probably pretty tired, right? Well, you should be. Go on home, get a nice hot bath. Rest up…15 minutes. Then get your asses back in gear. We’re under a lot of pressure, you know, and you put us there. Nothing’s riding on this except the first amendment to the Constitution, freedom of the press, and maybe the future of the country. Not that any of that matters, but if you guys fuck up again, I’m going to get mad.”

This movie created the term “blockbuster.”

It became the highest grossing movie of all time upon its release.

It’s the first film to ever make $100 million at the box office.

The score, the images, the lines, the scenes, are all iconic.

It’s the only choice for 1975. END_OF_DOCUMENT_TOKEN_TO_BE_REPLACED

Pic of the Day: “Y’all know me. Know how I earn a livin’. I’ll catch this bird for you, but it ain’t gonna be easy. Bad fish. Not like going down the pond chasin’ bluegills and tommycods. This shark, swallow you whole. Little shakin’, little tenderizin’, an’ down you go. And we gotta do it quick, that’ll bring back your tourists, put all your businesses on a payin’ basis. But it’s not gonna be pleasant. I value my neck a lot more than three thousand bucks, chief. I’ll find him for three, but I’ll catch him, and kill him, for ten. But you’ve gotta make up your minds. If you want to stay alive, then ante up. If you want to play it cheap, be on welfare the whole winter. I don’t want no volunteers, I don’t want no mates, there’s just too many captains on this island. $10,000 for me by myself. For that you get the head, the tail, the whole damn thing.”