A Pictorial History of the Movies: 1974 – Chinatown

The lazy choice here is to go with Godfather Part II. But I already put Godfather there, so why double dip? Especially when we have a film that’s just as good in Chinatown?

And honestly, I’d even argue that Godfather II wasn’t the most representative film of 1974. It’s just the biggest and best remembered. The real films that represented 1974 are probably either Blazing Saddles/Young Frankenstein or something like The Towering Inferno. Since Mel Brooks just dominated 1974, film-wise, and box office-wise, and big budget disaster movies were all the craze in the 70s.

But, instead, I just felt class should win out, and I went with Chinatown. Since the movie just feels like the 70s. And I’m sticking with that as my reasoning.

END_OF_DOCUMENT_TOKEN_TO_BE_REPLACED

Pic of the Day: “Well, I’m judging only on the basis of one afternoon and an evening, but, uh, if this is how you go about your work, I’d say you’d be lucky to, uh, get through a whole day.” “Actually, this hasn’t happened to me for a long time.” “When was the last time?” “Why?” “It’s an innocent question.” “In Chinatown.” 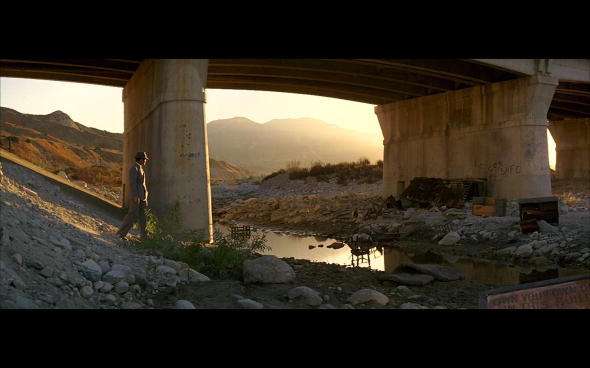 A Pictorial History of the Movies: 1973 – American Graffiti

That says it all.

The Sting may have been the highest grosser of the year, and the film that won all the awards (and be my favorite film of the year), but American Graffiti was the choice. Because, while The Sting looked back to the ragtime era, American Graffiti looked back to the era that all the 70s filmmakers grew up in (50s and 60s). The baby boomer generation. It might be one of the first pure nostalgia films, evoking the sights and sounds of the era (and having a badass soundtrack to boot).

It’s a great film. Because, essentially, there is no story here. It’s just a bunch of characters hanging out over the course of a night. And you’re hanging out with them. And that’s what makes it great. END_OF_DOCUMENT_TOKEN_TO_BE_REPLACED

Pic of the Day: “Excuse me, but I think we’ve had an accident.” “Well, goddammit, I won’t report you this time, but next time just watch it, will ya?” 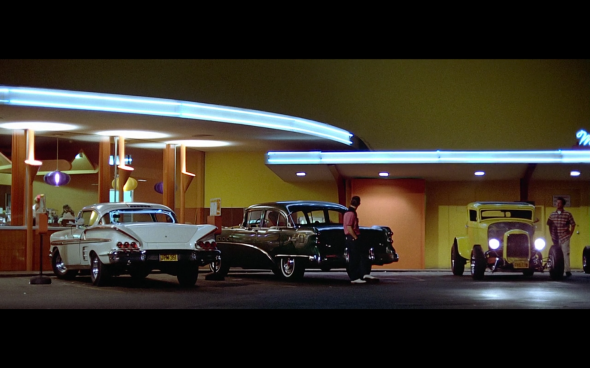 A Pictorial History of the Movies: 1972 – The Godfather

I’ve said all along… whenever a film becomes the highest-grossing film of all time upon release, it’s almost certainly going to become the choice for its year.

And also… it’s The Godfather.

Of course this is the choice for 1972. There’s nothing else that even comes close.

Rather than just leave it at that (because I really could have. Since I don’t need to spend a second explaining this decision), I’m just gonna throw out random trivia for a while. END_OF_DOCUMENT_TOKEN_TO_BE_REPLACED

Pic of the Day: “I’m gonna make him an offer he can’t refuse.”

A Pictorial History of the Movies: 1971 – The French Connection

This movie just reeks of the 70s. For some reason, when I want to think of pure “70s” movies, I think of this and The Conversation. Both, coincidentally, starring Gene Hackman.

It’s just a terrific movie. A cop movie, a thriller, a great car chase. This movie has everything. And it won Best Picture, which, looking back, is just crazy. It’s an American classic and all, and it’s an incredible film, and it completely represents what Hollywood was doing at the time, but the idea that a movie like this won Best Picture is both amazing and absolutely ridiculous. Hollywood would never let that happen nowadays. A contemporary thriller winning Best Picture. Never.

This film is so good. Sometimes I forget how good it is, and then I watch it again, and it’s just amazing. END_OF_DOCUMENT_TOKEN_TO_BE_REPLACED

Pic of the Day: “This is Doyle. I’m sittin’ on Frog One.” “Yeah, I know that. We got the Westbury covered like a tent.” “The Westbury my ass! I got him on the shuttle at Grand Central, now what the hell’s going on up there?” 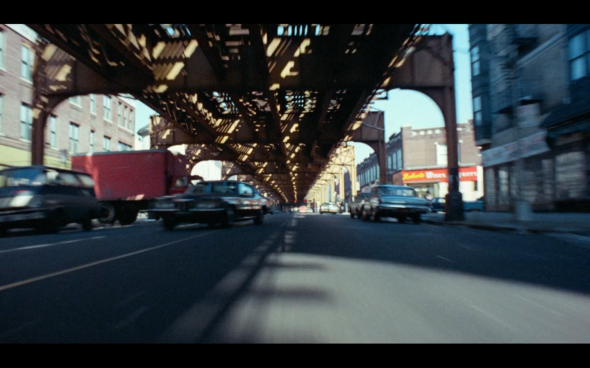 A Pictorial History of the Movies: 1970 – Love Story

It’s always funny to see how romance movies look years later. Because almost always, they seem to appear schlocky or schmaltzy or contrived or something. This movie is no exception. The romance is very much a product of its era, and almost all of them will seem terrible when watched years later.

Case and point – Jerry Maguire. Jerry Maguire has since become its own cliché. We love it because of the sports movie aspect, but when you get to the romance element, and “You complete me” and “You had me at hello” – people scoff at that now. But at the time, it was romantic as shit. Don’t even pretend like it wasn’t.

This movie is the Jerry Maguire of 1970. It was a huge hit, romantic as hell, tragic as hell, and everyone went out to see it. And since then, it’s become so copied and used as a template for romances that to see it now, it’s almost laughable. (To some people. I saw this for the first time in 2010, and completely fell in love with it.)

But the fact remains, if we’re talking 1970, this is the movie. END_OF_DOCUMENT_TOKEN_TO_BE_REPLACED

Pic of the Day: “Love means never having to say you’re sorry.” 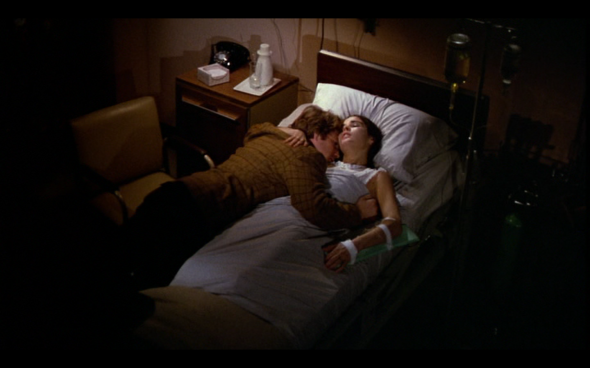 A Pictorial History of the Movies: 1969 – Easy Rider

Just try to say this isn’t the most representative film of 1969. Go ahead.

It’s impossible. Believe me. I tried.

Butch Cassidy and the Sundance Kid is a nice choice, but no. Doesn’t represent 1969 as much as it’s a timeless classic. Representative of 1969 for the western (but so is The Wild Bunch, which…), but not so much for 1969 the year in film. Midnight Cowboy… close, but it’s no Easy Rider. Technically you can say Hello, Dolly! Or Paint Your Wagon represents 1969, but the reasons for that would be depressing.

And with major props to They Shoot Horses, Don’t They? and Alice’s Restaurant (do people even remember that movie?), you can’t deny Easy Rider as the film of 1969. Just ask anyone who lived through it. END_OF_DOCUMENT_TOKEN_TO_BE_REPLACED

The thing I’ve always said about 1968 is that it’s the transitional year. 1967 happens and now the studios realize what the future is. New, experimental films, and not the processed studio movies they’re used to churning out. Only, that kind of change doesn’t happen overnight. So you see more of those types of movies entering the marketplace, but the studio still had all these “old” movies still in production and ready to come out.

The reason I mention that is because – it makes picking a choice that represents 1968 really difficult. Well, maybe not. But, historically, it does.

Some may feel I went with a bit of a cop out choice, but it’s still 2001: A Space Odyssey, and that alone makes it a pretty decent choice on its own. END_OF_DOCUMENT_TOKEN_TO_BE_REPLACED

Pic of the Day: “I am putting myself to the fullest possible use, which is all I think that any conscious entity can ever hope to do.”

A Pictorial History of the Movies: 1967 – Bonnie and Clyde

This was almost one of the easiest decisions I had on the list.

Because, looking at this year… it’s four films. But In the Heat of the Night and Guess Who’s Coming to Dinner fall off pretty quickly. The only other choice that can hold a candle to this one is The Graduate. But, honestly… no film had as big an impact on cinema as this one did. The Graduate was more a cultural reflection and a great piece of cinema that was very popular that also crossed over into popular culture. This movie changed cinema forever.

When you mark the threshold between Old Hollywood and New Hollywood, this film is that threshold. It’s the only choice for 1967. END_OF_DOCUMENT_TOKEN_TO_BE_REPLACED

A Pictorial History of the Movies: 1966 – The Good, the Bad and the Ugly

END_OF_DOCUMENT_TOKEN_TO_BE_REPLACED

Pic of the Day: “Two hundred thousand dollars is a lot of money. We’re gonna have to earn it.”

A Pictorial History of the Movies: 1965 – The Sound of Music

If a film becomes the highest grossing movie of all time upon its release, there’s a really good chance it’s going to be the choice for most definitive film of the year.

I don’t see how anyone goes with any other film except The Sound of Music as being the one that best represents 1965.

This was the biggest movie in the world in 1965. Everyone saw it. Everyone continued to see it. It’s one of the most famous and iconic movies ever made, despite how schmaltzy it is and how even its star looks back on it with disgust.

You can rattle off at least a half a dozen memorable musical numbers from this movie. There’s absolutely no argument against this being the film of 1965. END_OF_DOCUMENT_TOKEN_TO_BE_REPLACED

A Pictorial History of the Movies: 1964 – Dr. Strangelove

This is a really tough year. There are a lot of choices here. And I mean a lot.

You have two James Bond movies (From Russia with Love and Goldfinger, the latter being the official 1964 film), Mary Poppins, My Fair Lady, A Fistful of Dollars, and A Hard Day’s Night. And those are just the great choices. Let’s not even get into the good ones.

Yet… I feel like history has made this the choice. It’s just such a good and iconic movie, and really represents that underbelly of Hollywood of the satirical, black comedy. And coming when this did, it’s a good representation of a time right when Hollywood went having pretty rigid standards for what they talked about and what they didn’t to saying and showing pretty much whatever they wanted.

Not to mention all the iconic moments in this — “The War Room,” riding the bomb, “You’ll have to answer to the Coca Cola company,” “Mein Fuhrer, I can walk!”… it’s amazing how ahead of its time this film is. END_OF_DOCUMENT_TOKEN_TO_BE_REPLACED

October 9, 2014 | Categories: Movies | Tags: 1964, A Pictorial History of the Movies, Dr. Strangelove, Dr. Strangelove or: How I Learned to Stop Worrying and Love the Bomb, Film, Movies | Leave a comment

Pic of the Day: “Gentlemen, you can’t fight in here! This is the War Room.”

1963 is a tough year to choose from. Because what exactly is the focal point?

I thought about choosing Cleopatra, as an example of the crumbling institution of classical Hollywood filmmaking, but there were a couple of epic films over the past few years, and why focus on that?

Plus, 1963 has a couple of holdovers from 1962 in it, like Dr. No and How the West Was Won, which makes it difficult. Which year do they count for?

Then, there’s a movie like The Cardinal, which deals with a lot of social issues, like abortion, bigotry, and racism, in a very frank way, which was just one of the final death knells to the production code. But I talked about that a lot as well.

And there are other great movies I could have chosen as well, for various reasons.

But instead, I’m completely copping out and choosing 8½, and the rest of this article is basically going to consist of, “Look at it. Look how great this is.”

Pic of the Day: “I thought my ideas were so clear. I wanted to make an honest film. No lies whatsoever. I thought I had something so simple to say. Something useful to everybody. A film that could help bury forever all those dead things we carry within ourselves. Instead, I’m the one without the courage to bury anything at all. When did I go wrong?”