So, in the spirit of that, here are my favorite animated short films from this past decade:

Note: All of these films should be widely available to find online. I haven’t posted links just because of how often these things get taken down. But with a simple search, I bet you can find most, if not all, of the films on this list. And do look them up, because they’re all worth seeing.

This is our first Google Spotlight story on this list. I’m not sure how widely known these were, but for about five or six years, Google created these immersive, VR type shorts that I think were designed to be seen with the headset but could also be watched online. They allow you to see the full 360° view of everything you’re watching, and you don’t even have to follow the action if you don’t want to. They made 13 in all, about half of which are gonna end up on this list because they’re so beautifully done.

I believe this was the first one they made, and is made by Aardman. It’s essentially a slapstick comedy about a bumbling manager of an apartment complex trying to capture what he thinks is an intruder but is really just Santa coming down to deliver presents to all the residents. So there are a lot of sight gags of him trying to catch Santa and Santa evading him by slipping in and out of passageways right when the manager isn’t looking. It’s really cute, and really shows you the kind of canvas 360° animation gives you. I think there are others that do better things narratively, but for a first time out, this one’s really effective for illustrating what it can do. 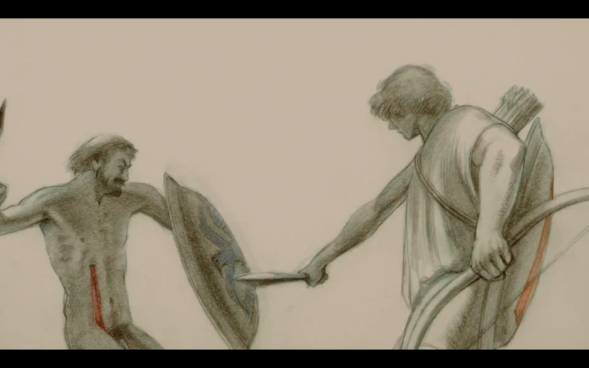 This is a short by Richard Williams, who was the animation director on Who Framed Roger Rabbit and directed the unfinished Thief and the Cobbler, which is kind of a notorious film among animation heads. The film was, as evidenced by its title, meant to be the sizzle reel for a planned movie he wanted to make based on Lysistrata (which was the basis for Spike Lee’s Chi-Raq). So it’s kind of a plotless piece of animation that’s really just a short battle sequence with warriors killing one another. But it’s so well-drawn, and clearly he put great care and effort into the animation. It’s just a really well-done piece of work, even if it really was meant to be a part of something larger. 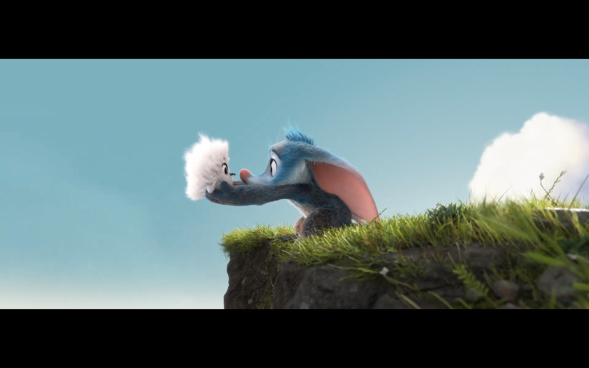 A lovely short by DreamWorks, of all people. They’re not typically known for their shorts. I think the only one most people could name is the one with the squirrel chasing after the acorn that was an offshoot of Ice Age. This is kind of an offshoot of that, in a way. It’s about a bilby in the Outback who survives by being faster and smarter than his predators. Though one day he meets a baby albatross who can’t survive on its own and his loner instincts give way to his better nature and he prevents it from being killed. Of course, the albatross starts following him around, and he wants no part of it, so he keeps trying to lead it to safety and go on his way, but the baby keeps on following him and getting itself into more and more trouble.

It’s a very fun short that has a nice ending to it. It’s the perfect kind of short to put in front of a live-action feature. They didn’t, and I think it’s because it was all based on leftover ideas from a feature film of theirs they cancelled. But it is that kind of short. You show this to a child, and they’ll enjoy it because it’s everything a short film should be.

This is a short that’s all about its animation style. The way they draw this is stunning (the director, Theordore Ushev, is known for this style and has another film of this style on this very list). It’s about a girl born with one eye that can only see the past, and another eye that can only see the future, preventing her from living in the present. So when she encounters a person, all she can see are a child and an elderly person. She’s unable to see the person as they currently are. It’s just a gorgeous film to watch. And I love how the film ends with a direct confrontation of the audience. Not many films are willing to do that.

I believe this was Google’s second Spotlight story and their first live action one. Directed by Justin Lin, it’s about a creature that crash lands in Downtown LA, sending a woman on the run from it. It’s well done, though maybe a bit short and light on story, only because of where it ends. You’d hope that maybe they built toward that a little more, but it’s a nice little short. Especially with the 360° style. You get to look all around to find out where the creature is and see the full scope of the destruction being caused. It’s fun watching something act as a playground for filmmakers to make cool things with this type of technology.

This short got a lot of press because of its subject matter. It’s about a young boy who has a crush on another boy, which he tries to hide because he’s worried about the other kids finding out about his sexual orientation. But his heart, which wants what it wants, has other ideas, and leaps out of his body, determined to give itself to the other boy. It’s a sweet short with a really nice message of representation and inclusion and tolerance, and is just really likable.

The third Google Spotlight story on this list. This one’s about a girl who gets a new pair of sunglasses. Only, whenever she puts them on outside, the single raincloud that’s been following her makes it start raining. So it’s a fun little short that takes place in this town square as she causes all sorts of mayhem by the sudden appearance of rain in just the single spot. This, more so than the others, has the full scope of the 360° working for it, as you can go anywhere in this town square and see things happening, even if they’re not the focal point of the short. It’s really nice, and really colorful, which I also liked a lot. It’s a great idea for a short — it’s a phone call between a couple whose relationship is coming to an end portrayed visually as a battle between warriors in ancient China. The colors are so beautiful and the way it’s drawn makes everything pop in a way that commands your attention. Some may find the metaphor a little heavy-handed, but I loved it. A beautifully crafted short about an aging painter’s descent into dementia. This is a fairly common theme among animated shorts, but rarely is it told so vividly as it is here. It uses his profession to play with the visuals in surprising and profound ways. At one point, his cell phone turns into drops of paint that float away, and toward the end of the short, his wife (as picture above) appears as a half-visible figure with splotches of paint to provide just enough outline to see that it’s a person. They do a really great job with imagery and making it feel like you’re in this man’s head as he start losing his grip on reality in such a way that’s really the only way he sees things. It’s really well done and ends on a very wonderfully emotional moment.

A genius idea for a short that evokes the method of ‘start somewhere and see where it takes you’. It begins with a simple straight line, and everything that happens is built around that straight line. It’s about a man and his humdrum existence. Getting up, going to work, the same old routine. And then he meets a woman, who turns his life upside down. And pretty soon, the line has gotten more colorful, and is moving in directions he hasn’t even encountered before. It’s wonderful. The visuals here are stunning and it’s just a nice metaphor for needing other people in your life and for falling in love.

This entry was posted on March 3, 2020 by B+ Movie Blog. It was filed under Movies and was tagged with 2010-2019, Favorite Animated Shorts of the Decade, Film, Movies, Top Ten, Top Tens of the Decade.