So, in the spirit of that, here are my favorite animated short films from this past decade:

Note: All of these films should be widely available to find online. I haven’t posted links just because of how often these things get taken down. But with a simple search, I bet you can find most, if not all, of the films on this list. And do look them up, because they’re all worth seeing. 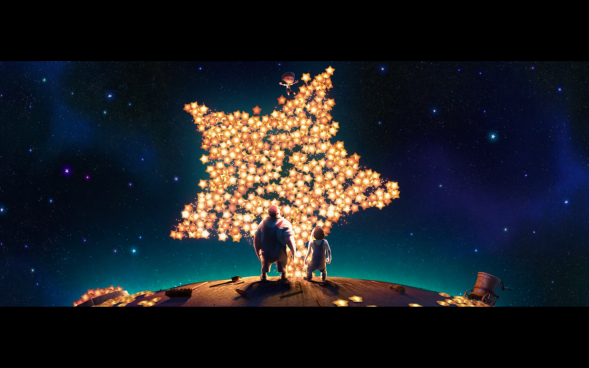 Another Pixar short. I think this is only our second, come to think of it. They’ve released eight total ‘official’ shorts this decade. Five of them, I believe, made the list. So you’ve got three more coming after this.

This is a short that’s light on plot, but heavy on the visuals. It’s about a young boy who goes to work with his father and grandfather — sailing out to see and climbing up to the moon, whereupon they begin sweeping up the fallen stars. That’s pretty much it. It’s all about the beauty of the visuals and the nice feeling of the three generations all working together and being close. Sometimes that’s more than enough.

I love this one. What a great idea for a short. Because it’s both entertaining and also is a great metaphor for staleness in a long-lasting marriage. The film is about an older married couple who have grown apart, which is represented through the fact that each lives on a completely different plane of gravity within their house. His reality is one way and hers is upside down from his. And occasionally they interact, but largely they’re living separate lives, together. And the film is about them trying to find a way to keep their marriage together and find that common ground. And how they do it is just absolutely beautiful.

I love this film. This is a prototype kind of short that I would look to show people for what my idea of a perfect animated short film is. It’s the perfect length, it tells a story that you understand, it has a message behind it, and it’s got some nice visual moments to it that you remember. It’s, in its way, a perfect entity. Another Google Spotlight short. This is one of the more well-known ones. It’s from the director of Paperman, and it’s about a young girl who falls overboard from a ship and is picked up by a drunk old sailor on his boat. And the film is about their relationship and fight for survival. It looks gorgeous and it’s a fun one to watch. I’m a huge fan of the set up and the scenario they set up, so this was always going to appeal to more more than it would other people. But I think it’s a tremendous short that really takes advantage of the ability to shoot 360°. Plus Ian McShane voices the sailor, which just adds a whole level of spice to the proceedings.

It’s just a beautiful short. It’s about a father having to deal with his daughter’s unruly head of hair. So they watch tutorials from her mother, and it helps him learn how to get her hair the way she wants it. It’s a really touching film with a message of love and inclusion, the kind of which we need to see more of in animated shorts and film in general.

A stunning piece of animation from Glen Keane (who also animated Dear Basketball). It’s a short that has no real plot to it and is just four minutes of sublime beauty. And, it’s part of the Google Spotlight stories, too. Largely it’s a celebration of life, centered around dancing. A boy and a girl grow up together, and it’s just a duet between the two of them. And it’s wonderful. Sometimes the simplest things are the best things.

A short very reminiscent of Inside Out, but to a different end. Instead of being about the person’s inner feelings, it’s about their inner organs and their feelings. It follows a man who works a boring, dead end desk job, whose brain is concerned with keeping him safe and taken care of, but his heart wants him to have fun and live life. And the film is a constant struggle between the two, leading to… well, you can guess.

It’s a really great short. Even if you see Inside Out all over it, it works, because the story it tells is universal and they tell it really well. It’s just a smart, well-made short. And it’s Disney, at that. They’ve only put out about the same number of shorts as Pixar has this decade. Though, to their credit, all the shorts they’ve gotten on this list (four in total) all start here. When Disney makes an original short, they make them good.

I’ve always loved this short, for a variety of reasons. It’s just a wonderful piece of magic. It’s about a young man (clearly styled after Buster Keaton, which is the first reason why I love the film so much) who, after a hurricane, comes to a library of flying books. And he becomes caretaker of the library, caring for all the books and lending them out to the people of the town, lifting up their spirits after a tragedy, all while writing his own memoir.

I love the Buster Keaton homage, and I love that it’s a love letter to books and those who dedicate their lives to books, and the magic that’s inside books and the things books can do to us, transporting us to different places, lifting our spirits and helping us through tough times. It’s a one of the more lovely shorts you’ll ever see.

This is Disney again, and it’s a short I imagine most people have seen and love. It’s about a dog who really loves food, and the film is his relationship with his owner as told through all the different meals he eats. And it’s just really cute and has a really touching ending to it. I love a short that tells a story through a particular lens and allows you to understand what’s going on in the world at large around that lens on top of it. Because you’re basically just following the dog, but here you understand the man’s relationship with the woman, and how their relationship is going through the food the dog gets to eat. It’s really well done. And, of course, like all great shorts, the tag at the end just leaves you feeling really great because it’s so adorably done.

This is the shortest short on this list, but it’s one of the most inventive you’ll ever see. It’s only a minute and forty seconds long, and is just a short of someone making homemade guacamole. Only all the items used in the creation are other things, as you can see from the pictures above. It’s just so cleverly done and gives me that feeling of looking at stuff like I Spy books when I was a kid and all the various items that were in that. This is a short that oozes creativity and should excite anyone who watches it. This just makes me feel like I want to create good things.

Pixar again. And this is one of their most emotionally affecting shorts of all time. Sadly, it just missed out on the top ten, but it’s very worthy of inclusion.

It’s the story of two umbrellas, and it’s the story of color. You understand everything you need to know about the story through the use of color. In a world of drab black umbrellas, here’s one blue umbrella who feels lost… until he meets a red umbrella. And all he wants is to be near her and get to know her, but fate (and the weather) conspires to keep them apart. Only, through the magic of Pixar…. anything is possible.

It’s a really adorable film that anyone can follow. This is a short you can show a four year old and they will understand it perfectly. And the older you are, the more you appreciate the level of filmmaking (and photorealism) that went into it. It’s just a stunning achievement that has to be considered top five of all the Pixar shorts ever made.

This entry was posted on March 5, 2020 by B+ Movie Blog. It was filed under Movies and was tagged with 2010-2019, Favorite Animated Shorts of the Decade, Film, Movies, Top Ten, Top Tens of the Decade.