It’s funny how quaint this movie looks now that so many other indies have basically copied it over the past decade. This was, in a lot of ways, the O.G. The movie that did Cassavetes in the new age. Because that’s what it is — Gosling and Williams had characters and spent a lot of time developing them, but then they just went into scenes and did what they wanted and the movie was made around that.

The film is the story of a relationship, cut between the early days when the couple is in love and the later days, when they’re married and miserable and on the verge of divorcing. Both actors are tremendous here. This is the really the first time we saw Gosling do something like this. He had Half Nelson and then Lars and the Real Girl, and we took him seriously as an actor by that point, but this is the first time where he really went all out dramatic in a way where you’re like, “Oh, shit. This dude’s for real.” Of course, he’s topped this performance twice over by this point, but still, this one remains a terrific performance out of him and a sign of him becoming the actor he is today. 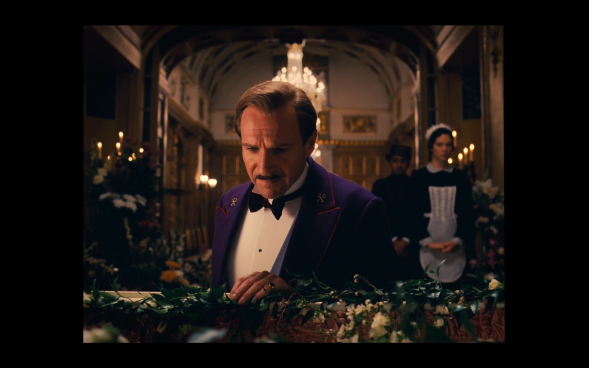 He’s just so wonderful in this. The super efficient concierge of the hotel that sleeps with the wealthy older female patrons. Fiennes plays him absolutely perfectly, and if there’s one thing people will always overlook, it’s a great comedic performance. What a complete 180 from The Master this is. That performance is, in a way, what one might expect from Joaquin. This one, though… no one would expect this. He plays a nerdy, lonely man who falls in love with an operating system. And it’s such a tender performance. He’s really been varied on his role choices this past decade and it really shows his range as an actor. Here specifically though, you get the side of Joaquin that maybe we hadn’t seen before. And it’s nice. He brings a real authenticity to the performance, which is funny considering the absurdity of the actual premise of the film (which is also scarily more realistic than we might want to think it is). 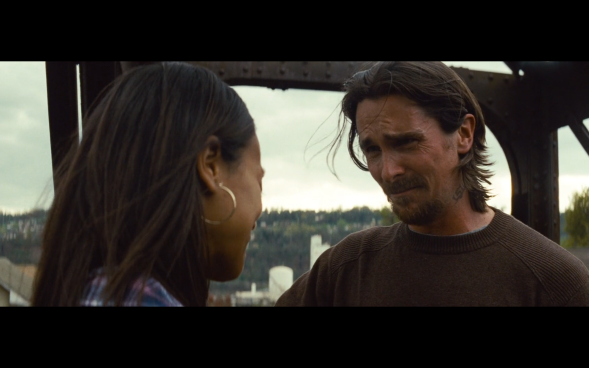 67. Christian Bale, Out of the Furnace

I said it at the time and I maintain that the scene pictured above is the best acted scene of 2013. This scene still makes me well up when I see it. Bale, with this, was coming off the final Dark Knight film, and right after this, American Hustle came out, which sort of overshadowed the work he did here. This is Scott Cooper’s followup to Crazy Heart, and it’s just a great drama with terrific performances by its entire cast, which includes Woody Harrelson, Casey Affleck and Zoe Saldana, Bale’s scene partner in the scene pictured above.

For anyone who hasn’t seen it — which I’d wager is most people — Bale plays a guy who is constantly looking out for his fuckup brother (Casey Affleck). He’s got a good thing with Zoe Saldana and he’s got a good life ahead of himself. Though one night, having to go bail his brother out yet again, he gets into a car accident that leaves someone else dead. So he does jail time. And then he gets out, and still has to look out for his brother, but now, his life has basically just fallen apart.

Bale is so good here. The inner pain this character carries and how Bale chooses to let it out over the course of the performance is just terrific. It’s really something to watch. And, like I said — that scene up there, when Bale comes back to Saldana after jail time. That scene alone is worth a spot on this list. 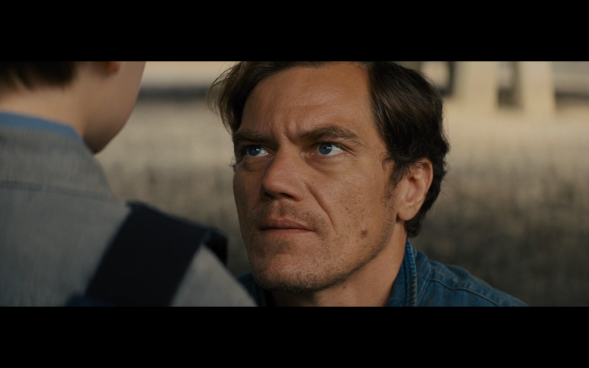 This is a Jeff Nichols version of a superhero movie. Shannon plays the father of a boy with extraordinary powers. And The film starts with him and his brother basically kidnapping the boy and transporting him to an unknown destination. And we slowly find out what’s going on and where they’re going and all that. It’s a really great film that does some great things with its slow burn. Some of the revelations actually make you go, “Oh, wow.” And Shannon is really the glue that holds things together. His performance is so fantastic. He’s just so loving, and so determined to make sure he does something right by his son.  For most people, you’ve never seen this side of Michael Shannon before, and it’s a really nice side to see.

This movie was a huge surprise for me. It got some notices at the time, but never really got anything that would make it stick as a film people go back to without people like me constantly talking it up. And yet again, it’s another great hidden gem of a Richard Gere performance.

Gere plays a hedge fund manager who is trying to sell everything and make that retirement nest egg. Though… well, he’s got some things going on that make everything teeter on the verge of going tits up. It’s almost like the white collar version of Uncut Gems.

Gere is absolutely terrific here. One of the performances of his career, for sure. The man is just watchable. And he’s a great actor. People forget how good he is because you rarely see him in a high profile film. But really, he’s one of the best we have.

He’s really great here. I’m always nervous about performances that are theatrical in nature. This film is based on a play and very much is a play on screen. It’s just actors acting, and there’s nominal direction of the scenes there. So it’s a very showy ‘Denzel’ type of performance. Which is totally fine. He’s great here and there’s no denying that. I just, personally, always have trouble rating these performances particularly high just because I see them as essentially a theater discipline as opposed to a film discipline. I know that’s just some shit that’s entirely my own doing, but that’s just how it is for me. He is really good here, though. 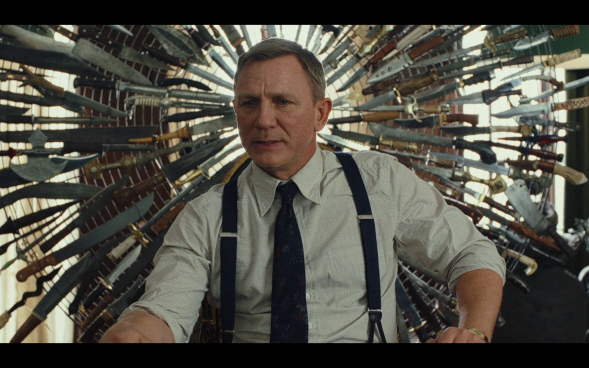 This performance is so good they’re apparently gonna bring the character back for more adventures. I’ve loved almost every choice Daniel Craig has made between his Bond films. Especially the later ones. His most recent non-Bond films are Girl with the Dragon Tattoo, Logan Lucky, Kings (which no one saw, though he plays an interesting character, and the film might be worth revisiting) and this.

The character here is just so wonderfully done. He’s meant to be a detective in the mold of Poirot. And he fits. He starts off as this shadowy character and pretty soon becomes the central figure to the story. Of course, the audience still has its central character, but he, being the detective solving the mystery, takes center stage for the finale, when he gets to explain ‘whodunit’.

What’s great about the character is that he’s got his comic affectations and quirks and is a humorous character for a lot of the film, but you also get that incredibly keen eye for detail and observation that make him a great detective. And really, what you want out of this character is for us to want to follow him on this investigation and let him explain things to us rather than trying to figure it all out for ourselves. Sure, we can guess, but you really want that detective to do their thing, because that’s one of the great pleasures of the genre. And that’s why the character (and Craig’s performance) is so good.

Somehow when we heard this movie was gonna be made and it was gonna be Joaquin, we all kind went, “That fits.” This is a straight comic role, and I think the ‘obviousness’ of it is what kept some people from seeing just how good the performance in it is. It’s almost like McConaughey in Beach Bum. Dude’s playing a stoner detective. But it takes a special kind of actor to pull off those two things. He’s gotta act high all the time, but also cognizant enough to solve the case (or stumble through the case to a conclusion where things wrap up) and also, you know… create a character worth watching. And it’s fantastic to watch him pull all that stuff together. Oh, and he has to be funny. This is a comedy. He’s gotta actually make comedy. It’s a real tightrope. That’s the beauty of Joaquin. Even when his performances don’t seem like they’re necessarily difficult, they are.

This one just sort of snuck up on us. For someone like him, I’d normally say, Good Time was the performance that made us sit up and take notice. And then this would be the performance where we were ready for it and he still impressed us by surpassing the expectations we now had for him. But this movie… it wasn’t that. It was more the Robert Eggars show at first. We saw that trailer and we saw him and Dafoe as lighthouse keepers and we thought, “Yeah, they fit, but wow, look at that movie.” It looked weird and interesting. So you weren’t really looking for the performance per se. And then man, does he deliver an incredible one. Dafoe gets the big showy part — he gets the big sailor voice and the beard and the overly comedic stuff. But Pattinson is the lead and has to carry most of the movie on his performance. And man, does he go to some weird places. But intensely weird. The things he does for this role are so beyond what he probably needed to do. And you know what? Here for it. This is the new Robert Pattinson, and honestly, don’t you just watch something like this and go, “Yeah… that’s Batman”?

This entry was posted on March 10, 2020 by B+ Movie Blog. It was filed under Movies and was tagged with 2010-2019, Favorite Male Lead Performances of the Decade, Film, Movies, Top Ten, Top Tens of the Decade.