I love the National Board of Review.

Most critics guilds, or whoever, when they list their top films of the year, I don’t pay any attention to it. It’s like, “New York Critics Name The Artist Best Picture.” And I’m like, “Great.” Of course, if I like the film in question, then I’m happier about the choice, but I never put much stock in the critics groups the way Oscar prognosticators do. I’m more about, “What’s in the race? Okay, here’s what I think is best,” then, “Oh, that’s what they nominated? Well, here’s what’s probably gonna win and here’s what I think should win.” So when all these groups announce their winners, I don’t immediately go and alter what I think is gonna happen, nor do I do, “Oh, well this means something.”

But for NBR, I do. And the reason I do is because — every year when I see their top ten list of best films, I agree with it. That’s not to say I’d make all the same choices, but, each year, I look at their list and agree with at least five or six of their selections (if not more), and of the remaining four, most of the time, I’ll go, “Yeah, I can see that.” I’ll never out and out go, “I don’t like that choice.” I may not like some of the films they chose, but I can at least agree with them choosing it. (And if not, it’s 1 out of 10, once every three years.) That’s why I like them. No other group has so consistently had such similar choices as me when listing the best films of the year.

I don’t even look at what they choose for their other awards. What I like best is their choice of top films. I like their choices so much that I actually made a list of every film they’ve ranked as their top films and am trying to have seen them all. That’s how much I respect their choices. (AFI too. I like AFI’s list. But I won’t talk about them until they announce their top ten for 2011.) END_OF_DOCUMENT_TOKEN_TO_BE_REPLACED

1967 is a landmark year made corporate, in my mind. In a year with Bonnie and Clyde and The Graduate, and even Guess Who’s Coming to Dinner, truly landmark films that mark the big break from classical Hollywood tradition, they go with In the Heat of the Night for Best Picture, which feels like the Hollywood version of one of those films. That’s just my own personal opinion on the matter.

Rod Steiger also won Best Actor for the film, which is cool. I wouldn’t necessarily vote for him, but he was good enough to win for The Pawnbroker, and this I look at as kind of a makeup Oscar. Best Actress was Katharine Hepburn for Guess Who’s Coming to Dinner, which is fine. I don’t think she beat anyone else who needed to win. Sure, I’d have voted differently, but it’s not that bad, because her competition also won Oscars. Best Supporting Actress was Estelle Parsons for Bonnie and Clyde, which was a fantastic decision. She was incredible. And Best Director (talked about here) was Mike Nichols for The Graduate. Fantastic decision.

The Best Picture decision does actually feel softened by the fact that the wealth was spread around very well, but still, that’s the one that gets remembered. And then there’s this category, which silently adds another great and classic film to the shared wealth. And I fucking love that.

Pic of the Day: “All right, Popeye’s here! get your hands on your heads, get off the bar, and get on the wall!” 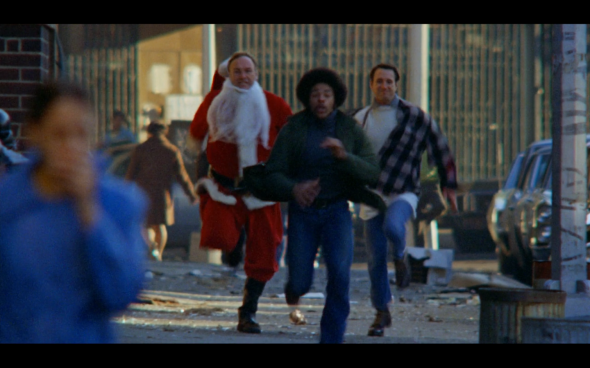 The Twilight Saga: Breaking Dawn — Part 1 (fuck, that’s a mouthful) wins the weekend yet again, as expected, with another $41.7 million, bringing it to $220.8 million domestically in ten days. It’s also crossed $500 million worldwide after twelve days. I don’t really have anything to say. Train’s almost over.

The Muppets finished second with $29.2 million for the weekend, bringing its total from Wednesday through Sunday to $41.5 million. Considering it had a $45 million budget, they’re gonna make a nice profit on this one, all things considered. (Though I imagine, not immediately, since I can’t see them not having spent at least $60 million to market this.)

Happy Feet Two finished third this weekend with $13.4 million, bringing its two week total to $43.8 million. This seems incredibly low for a film whose budget is reported at being $135 million and whose predecessor grossed almost $200 million. It wasn’t that bad. It was actually better than most animated sequels, and those tend to do $500 million worldwide easy. It doesn’t make sense. END_OF_DOCUMENT_TOKEN_TO_BE_REPLACED