I thought, last year, I had sound mixing and sound editing down. Turns out — I was wrong. I misinterpreted the explanation I read. Here is, based on my new and improved (read: correct) understanding of the category, the difference between the two: sound editing is the creation of the sound mix, that is — getting all the sounds to put on the soundtrack. So dialogue, ADR, music, sound effects, all of it. Every piece of sound you hear, that’s sound editing. Sound mixing is the taking of all of that sound and layering it onto the soundtrack. So, sound mixers work with what the sound editors give them. So when you see an action scene, you hear the people talking, guns going off, tires screeching, explosions, and “Ready, Steady, Go” on the soundtrack — the sound editors compiled all of those effects. The sound mixer put them all together into what you hear when you watch the film. That’s the difference between the two.

Oh, and we’ll also be talking about Best Visual Effects, which is a self-explanatory category. Especially today. (Read: Best CGI.) Though there’s some interest with that one this year.

We’ll start with the sound categories, specifically Sound Mixing, and finish with Visual Effects. This will be longer than your average article, since I have a lot to say about Sound Mixing and Sound Editing and because no one really knows how to pick them. But trust me, once I get done with you, you’ll be a fucking pro. (Or at least you’ll sound really good talking about it. That’s all you need.) END_OF_DOCUMENT_TOKEN_TO_BE_REPLACED

Pic of the Day: “Tough luck, Lonnehan. But that’s what you get for playing with your head up your ass! Couple more like that and we can all go to bed early.” “The name’s Lonnegan! Doyle Lonnegan! You’re gonna remember that name or you’re gonna get yourself a new game! You follow?” 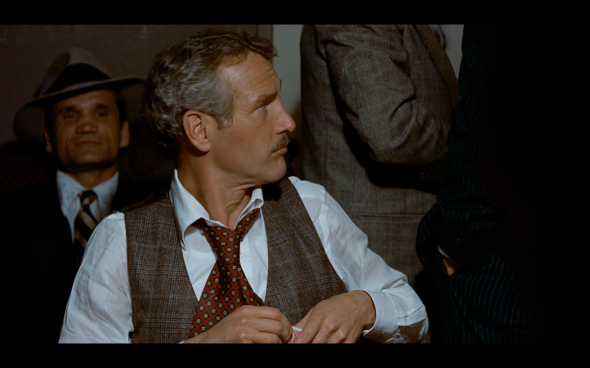