I grew up with GoldenEye. It’ll always be a seminal Bond film for me. Plus, GoldenEye 64 is probably the best Bond video game ever made. We all played it. I know this film. In terms of films I know backwards and forwards, this and Casino Royale are the two for me.

That said, the more I’ve thought about it, the more I feel like Dr. No probably should be here at #5 (and might well be, the next time I update this list after Skyfall). But, I feel like, for now, the sentimental aspect of GoldenEye helps me keep it here.

Either way, I think we can all agree that this was one of the best Bond movies they made. Almost everything about it works. It’s clearly Brosnan’s best, which might not be saying much, given his rocky tenure as Bond (he was always a good Bond in decent or not so good movies, but fortunately, here everything lined up), but still — this is easily a top ten film for all time, and is one I consider to be in that hallowed “top six” distinction. I feel like this, Dr. No and the four remaining films are easily the best six Bond movies made. And then the next four (at the moment) are Spy Who Loved Me, You Only Live Twice, Thunderball, and Quantum of Solace. Rank them however you want, as long as we can all agree that those are clearly tops.

This one has the distinction of really being the only top Bond film in the 80s or 90s, which is interesting. It’s really the only Bond movie made in those two decades (aside from maybe Licence to Kill) that has a perfect blend of story, action and “Bond.”

END_OF_DOCUMENT_TOKEN_TO_BE_REPLACED

Pic of the Day: “That gun, it looks more fitting for a woman.” “You know much about guns, Mr. Bond?” “No, but I know a little about women.” 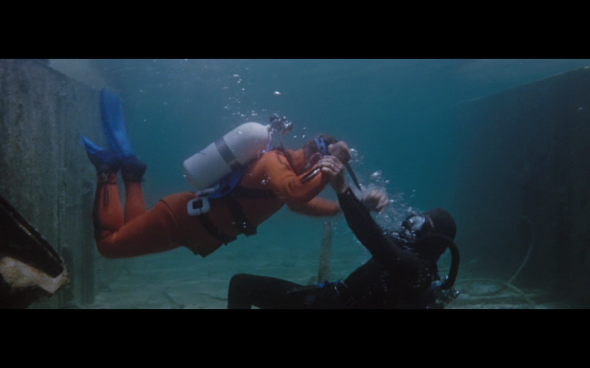