How to Read a Hollywood Release (Part 2)

Continuing from yesterday, here’s me actually putting my rubric, or whatever the hell it is, to good use, and showing you just how it works, rather than just talking about it. I’m going to bounce back and forth between 2010 in film and 2011 in film, and occasionally to 2009, 8 and 7 (but no more than five years. That would be madness), just to show you the trends in these, the most recent years of memory. Anything more than five years ago in Hollywood (honestly anything more than two is stretching it) is ancient history. I might refer to films from earlier, but that’s not due to looking at lists, it’s more from my memory. Like when you’re drunk and ranting and on a roll, “…and I remember this fucking film too!” Me remembering films like that and connecting them to trends is what led to this article in the first place.

We’ll start with January, because Rome says so.

Pic of the Day: “You look good. The picture the police have of you doesn’t do you justice.” “What do the police know about justice?” 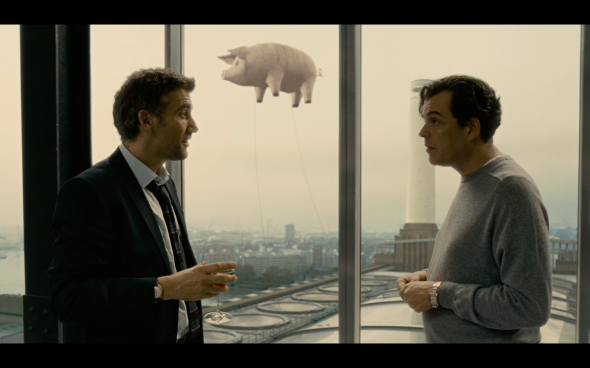 Hall Pass wins the weekend with an anemic $13.5 million. I am happy. I guessed around 15, but said I’d laugh if it did less than 14. And oh man, I’m laughing so hard right now my dick hurts. I honestly don’t care what wins the weekend as long as it makes what I deem an acceptable amount of money. $13 million is an acceptable amount of money because, really, this film is going to top out around $30 million. Max. Maybe 35. That’s about it. And for a movie starring the the next best thing to sliced bread in comedic value, Owen Wilson, I find this number appropriate. I feel that Matthew McConaughey and Kate Hudson and Owen Wilson and Jennifer Aniston should only do movies together from now on. That way, when they pair up, I’ll only have two movies to avoid per year instead of four. Also, with a $36 million budget and all the advertising, this is gonna count as a loss for the studio. And even though that studio is Warner Bros., who I respect for the chances they’ve been taking in years recent, I still want films like this to fail. So, I’m happy. It’s rare that I get the chance to not have to talk about a film I don’t like within two weeks.

Finishing second was, surprise surprise, Gnomeo and Juliet. The movie’s got new legs, Lieutenant Dan. New legs! It made $13.4 million. So, to get this straight, a children’s movie, which I’m now convinced (as I was when I saw the original trailer months ago) is actually probably the best movie to come out this year so far, came within a hundred thousand dollars of winning the weekend two weekends in a row! Niether of which were its opening weekend, mind you. Be prepared for children’s movies, people. Scar hath spoken. Not that I’m entirely upset about this. I’d actually rather watch innocuous kids movies (so long as they’re not horrendously bad) than shitty PG-13 thrillers about exorcisms and bad premises. END_OF_DOCUMENT_TOKEN_TO_BE_REPLACED